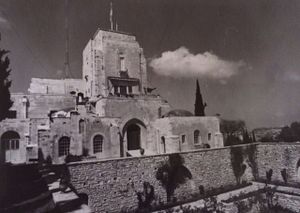 هيئة الأمم المتحدة لمراقبة الهدنة United Nations Truce Supervision Organization ‏(UNTSO) هي هيئة تأسست في 29 مايو 1948[1][2][3] for peacekeeping in the Middle East. Its primary task was providing the military command structure to the peace keeping forces in the Middle East to enable the peace keepers to observe and maintain the cease-fire, and as may be necessary in assisting the parties to the Armistice Agreements in the supervision of the application and observance of the terms of those Agreements.[3] The command structure of the UNTSO was maintained to cover the later peace keeper organisations of the United Nations Disengagement Observer Force (UNDOF) and the United Nations Interim Force in Lebanon (UNIFIL).

On 14 May 1948, the Assembly adopts resolution 186 (S-2), which affirms its support for the efforts of the Security Council to secure a truce in Palestine; decides to appoint a U.N. Mediator. Count Folke Bernadotte of Sweden was appointed. And sent him to Palestine. On 22 May 1948, the Security Council adopts resolution 49 (1948), calling for an abstention from any hostile military action in Palestine. The resolution also calls upon the parties to facilitate the task of the U.N. Mediator.

On 23 May 1948 Thomas C. Wasson, US Consul and member of the UN Truce Commission was assassinated in Jerusalem. 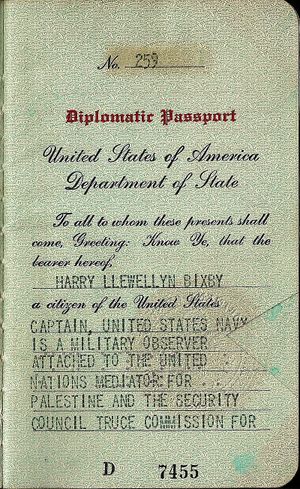 After assassination, the talks between the warring parties began under the supervision of the Acting Mediator, Ralph Bunche.

Cairo was the initial Headquarters of UNTSO. The UNTSO's HQ was moved, shortly after its creation, to Haifa (British enclave in this time), in late June 1948. The Haifa HQ was evacuated on 9 July due to renewed fighting. With the return of UN peacekeeping forces to Israel on 21 July 1948 the Headquarters for UNTSO was moved again on 7 October 1948 for the third and final time to Government House Jerusalem.

UNTSO has offices in Beirut and Damascus.

Evolution of the UNTSO

Following the wars of 1948, 1956, 1967 and 1973, the functions of the observers changed in the light of changing circumstances, but they remained in the area, acting as go-betweens for the hostile parties and as the means by which isolated incidents could be contained and prevented from escalating into major conflicts.

Resolutions 42 to 46: calls for cease-fire

The Assembly adopted resolution 185 (S-2) of 26 April 1948, asking the Trusteeship Council to study measures for the protection of Jerusalem, its inhabitants and to submit proposals to the General Assembly.

It should also be noted that not for the first time unarmed service with UNTSO carried its risks. In June 1967 Comdt Thomas Wickham [8] of the Irish Defense Forces was shot dead in Syria.

After the Lebanon War

UNTSO personnel have also been available at short notice to form the nucleus of other peacekeeping operations. The availability of UNTSO's military observers for almost immediate deployment after the Security Council had acted to create a new operation has been an enormous contributory factor to the success of those operations. 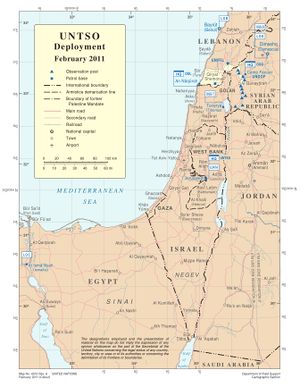 The military observers are un-armed and they carry out their jobs by observing and reporting violations of the agreements of ceasefire, disengagement etc. that are relevant to their area of operations. All military observers are seasoned officers of the rank of captain or major coming from all branches of service in their respective countries armed forces.

The military observers work in multi-national teams, so that any observations will always be confirmed by at least two observers from different nations, as a measure to ensure impartiality.

Commanders (Chief of Staff) of UNTSO