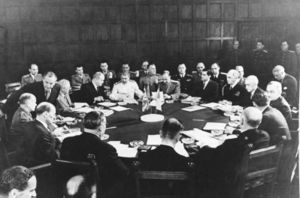 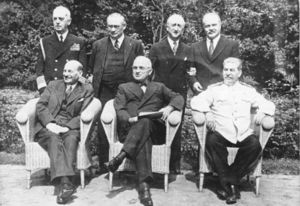 After the 1945 general election, Attlee had it in mind to appoint Bevin as Chancellor and Hugh Dalton as Foreign Secretary, but ultimately changed his mind and swapped them round. Some claim that he was persuaded by King George VI to do so; but others note that whoever was Chancellor would have to work with Herbert Morrison, with whom Bevin did not get on. Indeed, it was once noted that Bevin, on overhearing a (supposed) private conversation in which somebody commented "the trouble with Herbert [Morrison] is that he is his own worst enemy", immediately responded with a booming "Not while I'm alive he ain't!" (Some sources say this was about Nye Bevan, whom he also disliked)

One anecdote from the period after Labour's 1945 landslide election victory was that, late on a Friday afternoon, he was left a number of red ministerial boxes, with a note inviting him to take the boxes home to read over the weekend if he so desired. On the following Monday morning the civil servants found the boxes as they had left them on the previous Friday with the note amended with the words "a kind thought, but sadly erroneous"[1]. At that time most diplomats were recruited from public schools, and it was said of Bevin - as a compliment to the respect which he had earned - that it was hard to imagine him filling any other job in the Foreign Office except perhaps that of an old and truculent lift attendant.

Bevin became Foreign Secretary at a time when Britain was almost bankrupt as a result of the war and yet was still maintaining a huge air force and conscript army, in an attempt to remain a global power. The effort of paying for all this - and for the US loans - required austerity at home in order to maximise export earnings, while Britain's colonies and other client states were required to keep their reserves in pounds as "sterling balances". Britain was still closely allied to France - with whom the Dunkirk Treaty was signed in 1947 - and both countries continued to be treated as major partners at international summits alongside the USA and USSR until Paris in 1960. Broadly speaking, all this remained Britain's foreign policy until the late 1950s, when the humiliation of the 1956 Suez Crisis and the economic revival of continental Europe, now united as the "Common Market", caused a reappraisal.

Bevin was unsentimental about the British Empire in places where the growth of nationalism had made direct rule no longer practical, and was part of the Cabinet which approved a speedy British withdrawal from الهند in 1947, and from other territories. Yet at this stage Britain still maintained a network of client states in the Middle East (Egypt until the early 1950s, Iraq and Jordan until the late 1950s), major bases in such places as Cyprus and Suez (until 1954) and expected to remain in control of parts of Africa for many more decades, Bevin approving the construction of a huge new base in East Africa.

Bevin, a determined anti-Communist, was a strong supporter of the الولايات المتحدة in the early years of the Cold War and a leading advocate for British involvement in the Korean War. Two of the key institutions of the post-war world, the North Atlantic Treaty Organisation (NATO) and the Marshall Plan for aid to post-war Europe, were in considerable part the result of Bevin's efforts during these years. This policy, little different from that of the Conservatives ("Hasn't Anthony Eden grown fat?" as wags had it), was a source of frustration to some backbench Labour MPs, who early in the 1945 Parliament formed a "Keep Left" group to push for a more Left-Wing foreign policy.

In 1945, Bevin advocated the creation of a United Nations Parliamentary Assembly, saying in the House of Commons that "There should be a study of a house directly elected by the people of the world to whom the nations are accountable." He also made a crucial intervention in the cabinet committee GEN 75, insisting that the United Kingdom should commit to developing an atomic bomb whatever the cost, because of the effect on Britain's international standing; Bevin's support was said to have swung the meeting.[2]

Bevin was said to have defined his foreign policy as "to be able to take a ticket at Victoria station and go anywhere I damn well please!"[3] 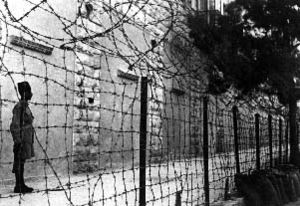 Bevin was also infuriated by attacks on British troops by militant Zionist groups, particularly those made by the more extreme groups, Menachem Begin's Irgun and the Lehi (after the King David Hotel bombing, the Haganah restricted itself to illegal immigration activities[6]). However, Britain's economic weakness, and its dependence on the financial support of the الولايات المتحدة (Britain had received a large American loan in 1946, and mid-1947 was to see the launching of the Marshall Plan), left him little alternative but to yield to American pressure over Palestine policy. At the reconvened London Conference in January 1947, the Jewish negotiators were only prepared to accept partition and the Arab negotiators only a unitary state (which would automatically have had an Arab majority). Neither would accept limited autonomy under overall British rule. When no agreement could be reached, Bevin threatened to hand the problem to the United Nations. The Jewish representatives, not believing that he would carry out his threat, and the Arabs, believing that their cause would prevail before the General Assembly, called his bluff. Bevin accordingly announced that he would "ask the UN to take the Palestine question into consideration."[6] A week later, the strategic reasoning behind Britain's interest for retaining a presence in Palestine was transformed when the intention to withdraw from India in August of that year was announced.[6] The decision to allow the United Nations to determine Palestine's future was formalised by the Attlee government's public declaration in February 1947 that Britain's Mandate in Palestine had become "unworkable." During the remainder of the Mandate, fighting between the Jewish and Arab communities continued. Britain's final withdrawal at the end of the Mandate, when the founding of the State of Israel was declared and five Arab states immediately intervened, saw the start of the 1948 Arab-Israeli War. The army of Jordan, a British client state since the 1920s, was commanded by a British General, Sir John Glubb. This war ended in an Israeli victory, and the displacement of thousands of Arab civilians - the very opposite of what Bevin seems to have wanted.

Bevin was undeniably a plain-spoken man, some of whose remarks struck many as insensitive, but his biographer Alan Bullock rejects suggestions that he was motivated by personal anti-Semitism. The historian Howard Sachar cites a source which suggests otherwise[original research?]. Sachar quotes a remark by Richard Crossman, a Labour Party MP and a member of the Anglo-American Committee of Inquiry into the Problems of European Jewry and Palestine, who met Bevin on 4 August 1947. Sachar claims that Crossman described Bevin's outlook as:

"corresponding roughly with the Protocols of the Elders of Zion, a notorious anti-Semitic canard of the 1920s.[7] The main points of Bevin's discourse were ... that the Jews had successfully organised a worldwide conspiracy against Britain and against him personally."[8][9]

One of Bevin's last comments on the topic was: "The majority proposal is so manifestly unjust to the Arabs that it is difficult to see how we could reconcile it with our conscience."[10]

In 1946, an Irgun plot to assassinate Bevin and other British Parliament members thought to be "anti-Semitic" was foiled by the MI5.[11]