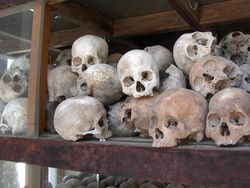 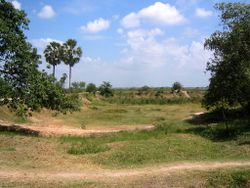 استولى الخمير الحمر على پنوم پنه في 17 أبريل 1975. As the leader of the Communist Party, Saloth Sar became the de facto leader of the country. He took the name "brother number one" and declared his nom de guerre Pol Pot. This derives from Politique potentielle, the French equivalent of a phrase supposedly coined for him by the Chinese leadership. An alternative explanation for the origin of Pol Pot's name is offered by Philip Short, who states that Saloth Sar announced that he was adopting the name in July 1970 and suspects that it is derived from pol: “the Pols were royal slaves, an aboriginal people,” and that “Pot” was simply a “euphonic monosyllable” that he liked.[8]

A new constitution was adopted on January 5, 1976, officially altering the country's name to "Democratic Kampuchea." The newly established Representative Assembly held its first plenary meeting on April 11 – 13, electing a new government with Pol Pot as prime minister. His predecessor, Khieu Samphan was instead given the position of head of state as President of the State Presidium. Prince Sihanouk was given no role in the government and was placed under detention.

The belief was that agriculture was the key to nation-building and national defense.[9] Pol Pot’s goal for the country was to have 70-80% of the farm mechanization completed within 5–10 years, to build a modern industrial base off of the farm mechanization within 15–20 years, and to be a self-sufficient state.[9] He wanted to take the economy and make it the primary source of goods for the nation, sever foreign relationships, and radically reconstruct the society to maximize the production of agriculture.[10] To avoid foreign domination of industries Pol Pot refused to purchase goods from other nations.[11]

Immediately after the fall of Phnom Penh, the Khmer Rouge began to implement their concept of Year Zero and ordered the complete evacuation of Phnom Penh and all other recently captured major towns and cities. Those leaving were told that the evacuation was due to the threat of severe American bombing and it would last for no more than a few days.

Pol Pot and the Khmer Rouge had been evacuating captured urban areas for many years, but the evacuation of Phnom Penh was unique due to its scale. Pol Pot stated that “...the first step in progress [was] deliberately designed to exterminate an entire class”.[12] The first operations to evacuate urban areas occurred in 1968 in the Ratanakiri area and were aimed at moving people deeper into Khmer Rouge territory to better control them. From 1971–1973, the motivation changed. Pol Pot and the other senior leaders were frustrated that urban Cambodians were retaining old capitalist habits of trade and business. When all other methods had failed, evacuation to the countryside was adopted to solve the problem.

In 1976, people were reclassified as full-rights (base) people, candidates and depositees – so called because they included most of the new people who had been deposited from the cities into the communes. Depositees were marked for destruction. Their rations were reduced to two bowls of rice soup, or "p'baw" per day. This led to widespread starvation. "New people" were allegedly given no place in the elections taking place on March 20, 1976, despite the fact the constitution supposedly established universal suffrage for all Cambodians over age 18.

The Khmer Rouge leadership boasted over the state-controlled radio that only one or two million people were needed to build the new agrarian communist utopia. As for the others, as their proverb put it, "To keep you is no benefit, to destroy you is no loss."[13]

Hundreds of thousands of the new people, and later the depositees, were taken out in shackles to dig their own mass graves. Then the Khmer Rouge soldiers buried them alive. A Khmer Rouge extermination prison directive ordered, "Bullets are not to be wasted." These mass graves are often referred to as The Killing Fields. 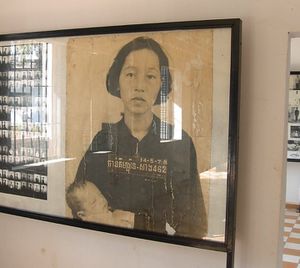 Photos of the victims of the Khmer Rouge, Tuol Sleng

The Khmer Rouge also classified people by religion and ethnic group. They banned all religion and dispersed minority groups[بحاجة لمصدر], forbidding them to speak their languages or to practice their customs. They especially targeted Buddhist monks, Muslims, Christians, Western-educated intellectuals, educated people in general, people who had contact with Western countries or with Vietnam, disabled people, and the ethnic Chinese, Laotians and Vietnamese[بحاجة لمصدر]. Some were put in the S-21 camp for interrogation involving torture in cases where a confession was useful to the government. Many others were summarily executed.

According to François Ponchaud's book Cambodia: Year Zero, "Ever since 1972, the guerrilla fighters had been sending all the inhabitants of the villages and towns they occupied into the forest to live and often burning their homes, so that they would have nothing to come back to." The Khmer Rouge systematically destroyed food sources that could not be easily subjected to centralized storage and control, cut down fruit trees, forbade fishing, outlawed the planting or harvest of mountain leap rice, abolished medicine and hospitals, forced people to march long distances without access to water, exported food, embarked on foolish economic projects, and refused offers of humanitarian aid, which caused a humanitarian catastrophe: hundreds of thousands died of starvation and brutal government-inflicted overwork in the countryside. To the Khmer Rouge, outside aid went against their principle of national self-reliance. According to Solomon Bashi, the Khmer Rouge exported 150,000 tons of rice in 1976 alone. In addition, "Coop chiefs often reported better yields to their supervisors than they had actually achieved. The coop was then taxed on the rice it reportedly produced. Rice was taken out of the people's mouths and given to the Center to make up for these inflated numbers....'There were piles of rice as big as a house, but they took it away in trucks. We raised chicken and ducks and vegetables and fruit, but they took it all. You'd be killed if you tried to take anything for yourself.'"[14] According to Henri Locard, "the reputation of KR leaders for Spartan austerity is somewhat overdone. After all, they had the entire property of all expelled town dwellers at their full disposal, and they never suffered from malnutrition."[15]

Property became collective, and education was dispensed at communal schools. Children were raised on a communal basis. Even meals were prepared and eaten communally. Pol Pot's regime was extremely paranoid. Political dissent and opposition was not permitted. People were treated as opponents based on their appearance or background. Torture was widespread, thousands of politicians and bureaucrats accused of association with previous governments were executed. Phnom Penh was turned into a ghost city, while people in the countryside were dying of starvation, illnesses, or simply killed.

U.S. officials publicly predicted shortly after the fall of Phnom Penh that more than one million people would be killed by the Khmer Rouge;[16] President Gerald Ford had warned of "an unbelievable horror story."[17] Modern research has located 20,000 mass graves from the Khmer Rouge era all over Cambodia. Various studies have estimated the death toll at between 740,000 and 3,000,000, most commonly between 1.7 million and 2.2 million, with perhaps half of those deaths being due to executions, and the rest from starvation and disease.[18] Demographic analysis by Patrick Heuveline suggests that between 1.17 and 3.42 million Cambodians were killed.[19] Demographer Marek Sliwinski concluded that at least 1.8 million were killed from 1975–9 on the basis of the total population decline, compared to roughly 40,000 killed by the U.S. bombing.[20] Researcher Craig Etcheson of the Documentation Center of Cambodia suggests that the death toll was between 2 and 2.5 million, with a "most likely" figure of 2.2 million. After five years of researching some 20,000 grave sites, he concludes that, "these mass graves contain the remains of 1,386,734 victims of execution."[18][21] A U.N. investigation reported 2–3 million dead, while UNICEF estimated 3 million had been killed.[22] Even the Khmer Rouge acknowledged that 2 million had been killed—though they attributed those deaths to a subsequent Vietnamese invasion.[23] By late 1979, U.N. and Red Cross officials were warning that another 2.25 million Cambodians starvation due to "the near destruction of Cambodian society under the regime of ousted Prime Minister Pol Pot,"[24] most of whom who were saved by international aid after the Vietnamese invasion.[25] The after-effects of Khmer Rouge policy contributed heavily to the deaths of an additional 650,000 Cambodians from 1979 to 1980.[26]

Pol Pot aligned the country politically with the People's Republic of China and adopted an anti-Soviet line. This alignment was more political and practical than ideological. Vietnam was aligned with the Soviet Union, so Cambodia aligned with the rival of the Soviet Union and Vietnam in Southeast Asia. China had been supplying the Khmer Rouge with weapons for years before they took power.

In December 1976, Pol Pot issued directives to the senior leadership to the effect that Vietnam was now an enemy. Defenses along the border were strengthened and unreliable deportees were moved deeper into Cambodia. Pol Pot's actions were in response to the Vietnamese Communist Party's fourth Congress, which approved a resolution describing Vietnam's special relationship with Laos and Cambodia. It also talked of how Vietnam would forever be associated with the building and defense of the other two countries.

Unlike many Communist leaders, Pol Pot was never the object of a personality cult. Even in power, the CPK maintained the secrecy it had kept up during its years in the battlefield. For over two years after taking power, the party only referred to itself as "Angkar" ("the Organization"). It was not until an April 15, 1977 speech that Pol Pot revealed the CPK's existence. It was also at that time that international observers confirmed that he and Saloth Sar were one and the same. 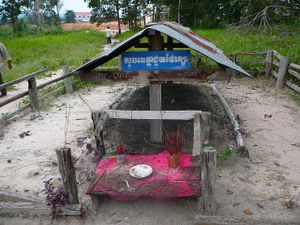