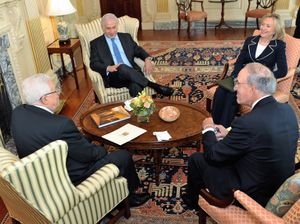 Since President Barack Obama took office in January 2009, he has made peaceful settlement of the Israeli-Palestinian conflict a top priority of his administration, appointing former Senator George Mitchell as his peace envoy.[1]

In March 2009 US Secretary of State Hillary Rodham Clinton traveled to Israel.[2] She warned that Israeli settlements and demolition of Arab homes in East Jerusalem were "unhelpful" to the peace process.[3] Clinton also voiced support for the establishment of a Palestinian state. Prime Minister-designate Benjamin Netanyahu supports Palestinian self-government but has not explicitly endorsed the US and Palestinian vision for statehood.[4][5] Upon the arrival of President Obama administration's special envoy, George Mitchell, Netanyahu stated that any furtherance of negotiations with the Palestinians will be conditioned on the Palestinians recognizing Israel as a Jewish state.[6] So far the Palestinian leadership has rejected a US-backed proposal extending a settlement freeze in exchange for recognizing Israel as a Jewish state,[7] as this issue had not been sufficiently clarified by Israel at that time.

On June 4, 2009 Obama delivered a speech at the Cairo University in Egypt in which Obama addressed the Muslim world.[8] The wide ranging speech called for a "new beginning" in relations between the Islamic world and the United States and also called for resumed negotiations between Israel and the Palestinians. In addition, during the speech Obama stated among other things that "The United States does not accept the legitimacy of continued Israeli settlements". "This construction violates previous agreements and undermines efforts to achieve peace. It is time for these settlements to stop."

On June 14, in what was understood as a response Obama's Cairo speech, Netanyahu gave a speech at Bar-Ilan University in which he endorsed, for the first time, a "Demilitarized Palestinian State", after two months of refusing to commit to anything other than a self-ruling autonomy when coming into office.[9] Netanyahu also stated that he would accept a Palestinian state if Jerusalem were to remain the united capital of Israel, the Palestinians would have no army, and the Palestinians would give up their demand for a right of return to Israel for the Palestinians who live in the Palestinian diaspora. He also claimed the right for a "natural growth" in the existing Jewish settlements in the West Bank while their permanent status is up to further negotiation. In general, the address sounded like a complete turnaround from his previously hawkish positions against the peace process.

On 23 August 2009, Netanyahu announced in his weekly cabinet meeting that negotiations with the Palestinians will begin in September 2009 and will be officially launched on his visit to New York, after he had accepted an invitation from President Barack Obama for a "Triple Summit" there.[10] He added that there is progress with special envoy George Mitchell, though there is no full agreement on everything,[11] and there will be more rounds of meetings until September.[12] On the same day, a spokesman for PA President Mahmoud Abbas said there would be no negotiations so long as Israel continued West Bank settlement construction.[13]

On 20 September 2009, the White House announced that it will host a three-way meeting between President Obama, Prime Minister Netanyahu and PA President Mahmoud Abbas, within the framework of the United Nations General Assembly, "in an effort to lay the groundwork for renewed negotiations on Mideast peace."[14][15] The meeting took place on 22 September, in نيويورك. Afterwards, Netanyahu said that he agreed with Abbas during the meeting that peace talks should be relaunched as soon as possible.[16]

On 25 November 2009, Netanyahu announced a 10 month partial settlement freeze plan, seen as due to pressure from the Obama administration, which urged the sides to seize the opportunity to resume talks. In his announcement Netanyahu called the move "a painful step that will encourage the peace process" and urged the Palestinians to respond.[17] Palestinians rejected the partial freeze as being insignificant, since Israel continued building 3,000 units in the West Bank already approved, and since the partial freeze did not extend to East Jerusalem, which also falls outside Israel's 1967 border.[18] In addition, the Palestinian leadership cited continued Israeli settlement construction, and Israel's failure to remove settlement outposts illegal under Israeli law, as violations of Israel's obligations under the Road Map for Peace.[19]

In August 2010 Barack Obama and Hillary Clinton stated that a Palestinian state is possible to achieve within one year.[20]

A renewed effort to negotiate peace was initiated by the Obama administration by getting the parties involved to agree to direct talks for the first time in a long while.[21] The Barack Obama administration was successful after many months, in part by getting support for direct talks from Egypt and Jordan, in persuading the Palestinians leadership to enter direct talks despite the Palestinian's reluctance caused by continued Israeli settlement construction in the West Bank.[21][22] The aim of the talks was to forge the framework of a final agreement within one year on a two-state solution, although general expectations of a success were fairly low.[21]

During the direct negotiations between Israel and the Palestinians, Hamas and Hezbollah reaffirmed to threat peace talks if both sides were matriculated towards any possible agreement. Thirteen Palestinian militant groups led by Hamas initiated a violent campaign to disrupt peace talks between Israel and the Palestinian Authority. A series of attacks killed and wounded eight Israelis, including two Israeli pregnant woman, between August and September 2010.

The Israeli government publicly stated that a peace wouldn't exist immediately due to Hamas and Hezbollah presence threatening the progress. The statement thus put the US to estimate a peace may be possible within one more year and making the necessity to focus on eliminating the threat as part of the direct talk progress.[بحاجة لمصدر] Israel is skeptical that once the final agreement is taken place and the responsibility falls on Palestinian Authority President Mahmoud Abbas, Hamas and Hezbollah would still get support to fuel a new violence. In addition the Israeli government clearly rejected any possible agreement with the Palestinian side as long as the Palestinian side refuses to recognize Israel as a Jewish state.

On September 21, 2010 Palestinian Prime Minister Salam Fayyad stormed out of a meeting in New York, which was held as part of the d-Hoc Liaison Committee (AHLC) meetings, and canceled a scheduled joint press conference with the Israeli President Shimon Peres and Israeli Deputy Foreign Minister Daniel Ayalon following Ayalon's demand that the meeting summary refer to the notion of "two states for two peoples", rather than just "two states".[26] Ayalon later commented on the event, stating:[27] Ayalon later commented on the event stating that "What I say is that if the Palestinians are not willing to talk about two states for two peoples, let alone a Jewish state for Israel, then there's nothing to talk about."[28]

President Obama indicated in a speech to the United Nations he held on September 23, 2010 that he is hopeful of a diplomatic peace within one year.[29] Contrary to popular belief Israel was not present at the UN speech because of the Jewish Holiday of Sukkot. Israel was not boycotting the speech.

Despite Palestinian and international pressure to extend the Israeli 10 month moratorium in construction of new Israeli settlement homes in the West Bank, on September 26 the 10 month Israeli freeze expired and Israel rejected the demands to extend the freeze.

On October 2, 2010 the Palestinian President Mahmoud Abbas states that peace negotiations will not continue until Israel makes a new freeze for the construction of Israeli settlements in the West Bank, thus putting an de facto halt to the current Israel-Palestine peace negotiations.[30]

On October 4, 2010, Netanyahu stated that the Israelis were working behind the scenes with the United States to resolve the issues and resume talks. Israeli sources had said that this would involve a 60 day extension of the freeze.[31][32]

Chief Palestinian negotiator Nabil Shaath accepted a US proposal to extend the West Bank settlement freeze by another two months. Sha'ath said the Palestinians accept such a limited extension provided the two sides can reach an agreement on the borders between Israel and a future Palestine in those two months.[33]

After a meeting in Libya on 8 October 2010, the Arab League leaders annouce their support for Palestinian Authority President Mahmoud Abbas's decision to stop peace talks with Israel over the expiration of the 10 month Israeli moratorium on construction in the West Bank.[34] The Arab League also stated that it would give the United States another month to to persuade Israel to renew the settlement moratorium[35] and that "The committee will convene again in a month to study the alternatives".[36]

On 11 October 2010, during a speach at the opening of the third session of the 18th Knesset, Netanyahu stated that he would initiate a cabinet proposal to renew a settlement moratorium if the Palestinian Authority would declare its recognition of Israel as the homeland of the Jewish people.[37] the Palestinian Authority quickly rejected Netanyahu's proposal and stated that the issue of the Jewishness of the state has nothing to do with the matter.[38][39] Speaking on behalf of the Palestinian Authority, chief negotiator Saeb Erekat stated on October 11 that the PA "forcefully reject all these Israeli games. The racist demands of Netanyahu cannot be tied to the request to cease building in the settlements for the purpose of establishing a state."[40]