Nigeria is a middle-income, mixed economy and emerging market, with expanding manufacturing, financial, service, communications, technology and entertainment sectors. It is ranked as the 30th-largest economy in the world in terms of nominal GDP, and the 23rd-largest in terms of purchasing power parity. It is the largest economy in Africa; its re-emergent manufacturing sector became the largest on the continent in 2013, and it produces a large proportion of goods and services for the West African subcontinent.[16] In addition, the debt-to-GDP ratio is 11 percent, which is 8 percent below the 2012 ratio.[17]

Previously hindered by years of mismanagement, economic reforms of the past decade[when?] have put Nigeria back on track towards achieving its full economic potential. Nigerian GDP at purchasing power parity (PPP) has almost tripled from $170 billion in 2000 to $451 billion in 2012, although estimates of the size of the informal sector (which is not included in official figures) put the actual numbers closer to $630 billion. Correspondingly, the GDP per capita doubled from $1400 per person in 2000 to an estimated $2,800 per person in 2012 (again, with the inclusion of the informal sector, it is estimated that GDP per capita hovers around $3,900 per person). (Population increased from 120 million in 2000 to 160 million in 2010). These figures were to be revised upwards by as much as 80% when metrics were to be recalculated subsequent to the rebasing of its economy in April 2014.[needs update][18]

Although oil revenues contribute 2/3 of state revenues[19], oil only contributes about 9% to the GDP. Nigeria produces only about 2.7% of the world's oil supply (in comparison, Saudi Arabia produces 12.9%, Russia produces 12.7% and the الولايات المتحدة produces 8.6%).[20] Although the petroleum sector is important, as government revenues still heavily rely on this sector, it remains a small part of the country's overall economy.

The largely subsistence agricultural sector has not kept up with rapid population growth, and Nigeria, once a large net exporter of food, now[when?] imports some of its food products, though mechanization has led to a resurgence in manufacturing and exporting of food products, and the move towards food sufficiency. In 2006, Nigeria successfully convinced the Paris Club to let it buy back the bulk of its debts owed to them for a cash payment of roughly US$12 billion.[21]

According to a Citigroup report published in February 2011, Nigeria will get the highest average GDP growth in the world between 2010 and 2050. Nigeria is one of two countries from Africa among 11 Global Growth Generators countries.[22]

In 2014, Nigeria changed its economic analysis to account for rapidly growing contributors to its GDP, such as telecommunications, banking, and its film industry.[23]

This is a chart of trend of gross domestic product of Nigeria at market prices estimated[24] by the International Monetary Fund with figures in USD billions. Figures before 2000 are backwards projections from the 2000–2012 numbers, based on historical growth rates, and should be replaced when data becomes available. The figure for 2014 is derived from a rebasing of economical activity earlier in the year.

The US dollar exchange rate is an estimated average of the official rate throughout a year, and does not reflect the parallel market rate at which the general population accesses foreign exchange. This rate ranged from a high of 520 in March 2017 to a low of 350 in August 2017, due to a scarcity of forex (oil earnings had dropped by half), and to speculative activity as alleged by the Central Bank. All the while the official rate was pegged at 360.

Per capita income (as % of USA) is calculated using data from estimates in the PPP link above, and from census estimates, based on growth rates between census periods. For instance 2017 GDPs were 1,125 Billion (Nigeria) vs. 19,417 Billion (USA) and populations were estimated at 320 million vs 190 million. The ratio is therefore (1125/19417) / (190/320), which roughly comes to 0.0975. These are estimates and are intended to get a feel for the relative wealth and standard of living, as well as the market potential of its middle class.

This is a chart of trend of the global ranking of the Nigerian economy, in comparison with other countries of the world, derived from the historical List of countries by GDP (PPP).

This chart shows the variance in the parallel exchange rate at which the Dollar can be obtained with Naira in Lagos, with "Best" being cheaper for a Nigerian (i.e. stronger Naira).[25] [26]

Efforts are underway[when?] to reverse these troubles. A new entity, the Niger Delta Development Commission (NDDC), has been created to help catalyze economic and social development in the region. The U.S. remains Nigeria's largest buyer of crude oil, accounting for 40% of the country's total oil exports; Nigeria provides about 10% of overall U.S. oil imports and ranks as the fifth-largest source for U.S. imported oil.

The United Kingdom is Nigeria's largest trading partner followed by the United States. Although the trade balance overwhelmingly favors Nigeria, thanks to oil exports, a large portion of U.S. exports to Nigeria is believed to enter the country outside of the Nigerian government's official statistics, due to importers seeking to avoid Nigeria's tariffs. To counter smuggling and under-invoicing by importers, in May 2001, the Nigerian government instituted a full inspection program for all imports, and enforcement has been sustained. 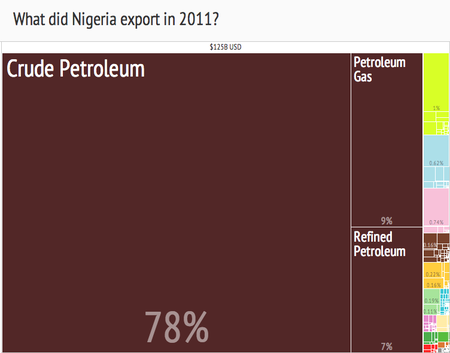 In 2005, Nigeria posted a US$26 billion trade surplus, corresponding to almost 20% of gross domestic product. In 2005, Nigeria achieved a positive current account balance of US$9.6 billion. The Nigerian currency is the naira (NGN). As of mid-June 2006, the exchange rate was about US$1=NGN128.4. In recent years, Nigeria has expanded its trade relations with other developing countries such as India. Nigeria is the largest African crude oil supplier to India — it annually exports 400,000 برميل لكل يوم (64,000 م3/ي) to India valued at US$10 billion annually.