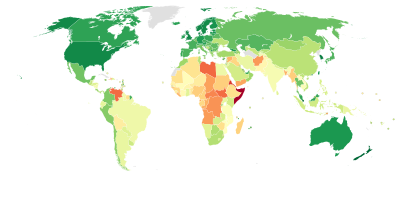 Note: Rankings at time of annual report publication. Rankings are subject to revision.

The Doing Business methodology regarding labor regulations was criticized by the International Trade Union Confederation because it favored flexible employment regulations.[1] In early reports, the easier it was to dismiss a worker for economic reasons in a country, the more its rankings improved. The Employing Workers index was revised in Doing Business 2008 to be in full compliance with the 188 International Labour Organization conventions. It has subsequently been removed from the rankings. The ITUC debuted the Global Rights Index in 2014 as a response to the Doing Business report.[2]

In June 2013, an independent panel appointed by the President of the World Bank and headed by Trevor Manuel of South Africa, issued a review expressing concern about the potential for the report and index to be misinterpreted, the narrowness of the indicators and information base, the data collection methodology, and the lack of peer review. It recommended that the report be retained, but that the aggregate rankings be removed and that a peer-review process be implemented (among other things). Regarding the topics of Paying Taxes and Employing Workers, it noted that "The latter has already been excluded from the report's rankings. While there is a persuasive case for paying attention to these aspects of doing business, the Bank will need to carefully consider the correct way to assess the regulation and legal environment of these areas if these indicators are to be retained."[6]

The Doing Business criteria for measuring the time needed to complete a procedure were based on some simplified assumptions: "It is assumed that the minimum time required for each procedure is 1 day. Although procedures may take place simultaneously, they cannot start on the same day (that is, simultaneous procedures start on consecutive days)". These assumptions generated some criticisms especially by countries that were able to complete one or more procedures simultaneously and could therefore be penalized in the final rank. World Bank claimed that the same criteria are applied to all economies and therefore would not produce biased results. In 2014 the possible biases in applying the DB time indicator were mathematically demonstrated in a scientific article[7] appeared on the Rivista italiana di economia demografia e statistica (Italian Review of Economics, Demography, and Statistics - RIEDS). World Bank partially reviewed the criteria inserting a new assumption for telematics procedures: "each telematics procedure accounts for 0.5 day instead of one day (and telematics procedures can also take place simultaneously)".