Solomon Islands is a sovereign country[7][8] consisting of six major islands and over 900 smaller islands in Oceania, to the east of Papua New Guinea and northwest of Vanuatu. It has a land area of 28,400 kiloمتر مربعs (11,000 ميل2), and a population of 652,858.[9] Its capital, Honiara, is located on the largest island, Guadalcanal. The country takes its name from the Solomon Islands archipelago, which is a collection of Melanesian islands that also includes the North Solomon Islands (a part of Papua New Guinea), but excludes outlying islands, such as the Santa Cruz Islands and Rennell and Bellona.

The islands have been settled since at least some time between 30,000 and 28,800 BC, with later waves of migrants, notably the Lapita people, mixing and producing the modern indigenous Solomon Islanders population. In 1568, the Spanish navigator Álvaro de Mendaña was the first European to visit them, naming them the Islas Salomón.[10] Mendaña returned decades later, in 1595, and another Spanish expedition, led by Portuguese navigator Pedro Fernandes de Queirós, visited the Solomons in 1606. Britain defined its area of interest in the Solomon Islands archipelago in June 1893, when Captain Gibson R.N., of إتش‌إم‌إس Curacoa, declared the southern Solomon Islands a British protectorate.[11][12] During World War II, the Solomon Islands campaign (1942–1945) saw fierce fighting between the United States, Commonwealth forces and the Empire of Japan, including the Battle of Guadalcanal.

The official name of the then-British administration was changed from the British Solomon Islands Protectorate to the Solomon Islands in 1975, and self-government was achieved the following year. Independence was obtained, and the name changed to just "Solomon Islands" (without the definite article), in 1978. At independence, Solomon Islands became a constitutional monarchy. The Queen of Solomon Islands is Elizabeth II, represented by the Governor-General.

في 1568، كان الملاح الاسباني ألڤارو دى مندانيا أول أوروپي يزور أرخبيل جزر سليمان، وأسماها Islas Salomón ("جزر سليمان") على اسم النبي الملك التوراتي سليمان.[10] It is said that they were given this name in the mistaken assumption that they contained great riches,[13] and he believed them to be the Bible-mentioned city of Ophir.[14] During most of the colonial period, the territory's official name was "British Solomon Islands Protectorate" until 1975, when it was changed to "Solomon Islands".[15][16] The definite article, "the", is not part of the country's official name but is sometimes used, both within and outside the country. Colloquially the islands are referred to simply as "the Solomons".[17] 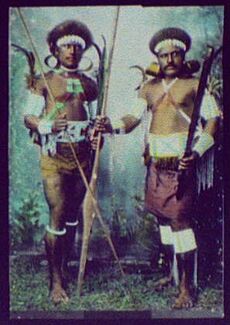 The human history of Solomon Islands begins with the first Papuan settlement at least 30,000 years ago from New Guinea. They represented the furthest expansion of humans into the Pacific until the expansion of Austronesian-language speakers through the area around 4000 BC, bringing new agricultural and maritime technology. Most of the languages spoken today in Solomon Islands derive from this era, but some thirty languages of the pre-Austronesian settlers survive. Most of the people that settled there back then were Papuans (انظر لغات شرق پاپوا). 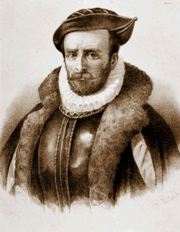 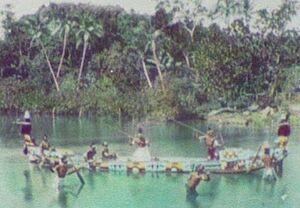 Solomon Island warriors, armed with spears, on board an ornamented war canoe (1895)

In 1595 and 1605 Spain again sent several expeditions to find the islands and establish a colony; however these were unsuccessful. In 1767 Captain Philip Carteret rediscovered the Santa Cruz Islands and Malaita. Later, Dutch, French and British navigators visited the islands; their reception was often hostile.

Museums with significant collections of Solomon Islands artifacts include the Bishop Museum, the Peabody Museum of Salem and the South Sea Islands Museum.

Missionary activity then started at the mid 19th century and European colonial ambitions led to the establishment of a German Protectorate over the North Solomon Islands, which covered parts of what is now Solomon Islands, following an Anglo-German Treaty of 1886. A British Solomon Islands Protectorate over the southern islands was proclaimed in June 1893. German interests were transferred to the United Kingdom under the Samoa Tripartite Convention of 1899, in exchange for recognition of the German claim to Western Samoa.

In 1927 District Commissioner William R. Bell was killed on Malaita, along with a cadet named Lillies and 13 Solomon Islanders in his charge. A massive punitive expedition, known as the Malaita massacre, ensued; at least 60 Kwaio were killed, nearly 200 detained in Tulagi (the protectorate capital),and many sacred sites and objects were destroyed or desecrated. Basiana, who had killed Bell, was hanged publicly on 29 June 1928.

Post-war period and the lead-up to independence 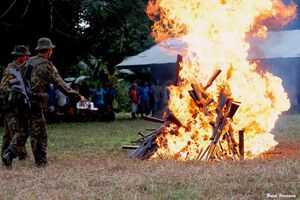 Australian troops, as part of the RAMSI peacekeeping mission, burn weapons confiscated from or surrendered by militias in 2003 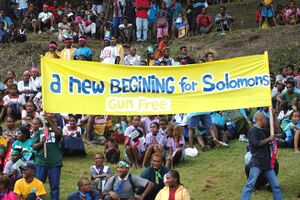 Solomon Islanders at a peace protest in 2003 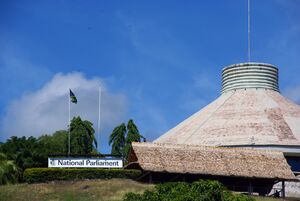 Solomon Islands' National Parliament building was a gift from the United States.

Ministry of the Interior 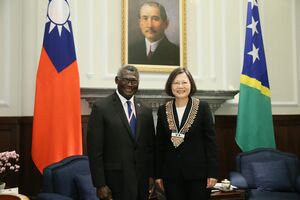 For local government, the country is divided into ten administrative areas, of which nine are provinces administered by elected provincial assemblies and the tenth is the capital Honiara, administered by the Honiara Town Council.

[1] excluding the Capital Territory of Honiara 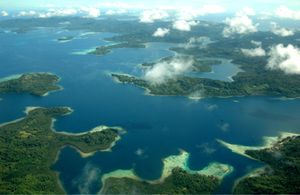 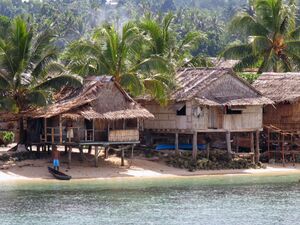 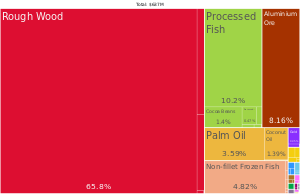 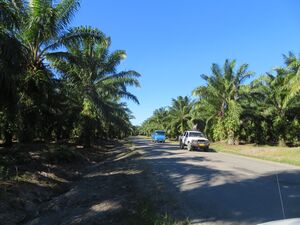 Plantation of oil palms near Tetere on Guadalcanal 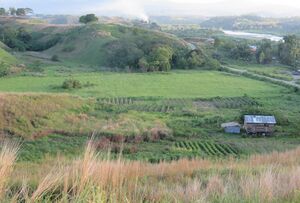 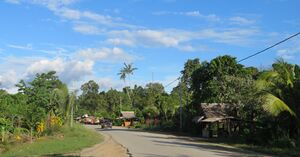 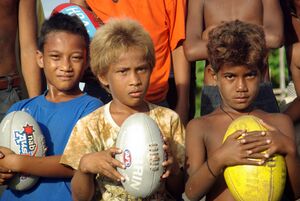 Solomon Islander boys from Honiara. People with brown or blond hair are quite common among Solomon Islanders without any European admixture, especially among children. 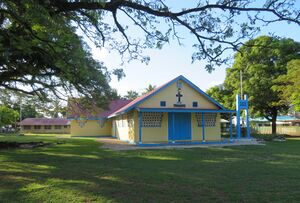 Catholic Church in Tanagai on Guadalcanal 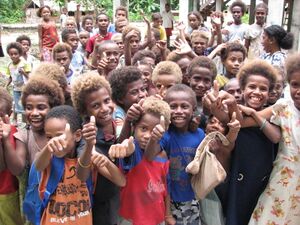 Children at the school in Tuo village, Fenualoa 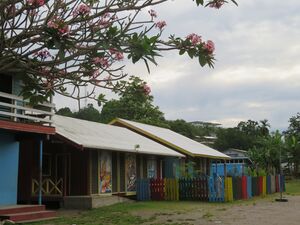 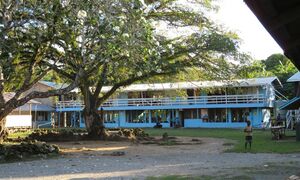 School in Tanagai on Guadalcanal 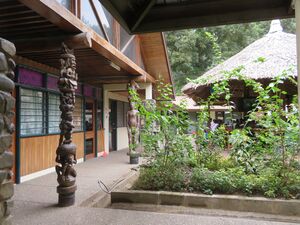 Campus of the University of the South Pacific in Honiara 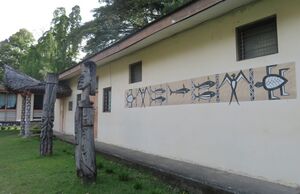 Traditional painting and wood carving in the National Museum in Honiara 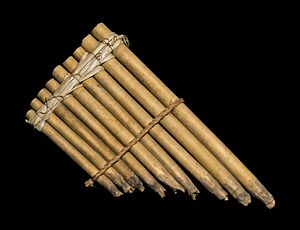