At the outbreak of the First World War in 1914, the colony was invaded and quickly overrun by British and French forces during the حملة توگولاند and placed under military rule. In 1916 the territory was divided into separate British and French administrative zones, and this was formalised in 1922 بخلق توگولاند البريطانية و توگولاند الفرنسية.

The colony was established towards the end of the period of الاستعمار الأوروبي في أفريقيا generally known as the "Scramble for Africa". Two separate protectorates were established in 1884. In February 1884, the chiefs of the town of Aného were kidnapped by German soldiers and forced to sign a treaty of protection.[3] In the Lomé region, the German explorer, medical doctor, imperial consul and commissioner for West Africa Gustav Nachtigal was the driving force toward the establishment of the West African colonies of Togoland as well as Kamerun. From his base on the Spanish island possession Fernando Po in the Bight of Biafra he traveled extensively on the mainland of Africa. On 5 July 1884 Nachtigal signed a treaty with the local chief, قالب:ILL, in which he declared a German protectorate over a stretch of territory along the Slave Coast on the Bight of Benin. With the small gunboat إس‌إم‌إس Möwe at anchor, the imperial flag was raised for the first time on the African continent. Consul Heinrich Ludwig Randad, Jr., resident agent of the firm C. Goedelts at Ouidah, was appointed as the first commissioner for the territory.[4]

In 1899, Germany and Great Britain traded territory in the Samoan Islands for the Northern Solomon Islands and control in Tonga, using the Togoland Neutral Zone (Yendi) and the Volta Triangle as bargaining chips.[5] 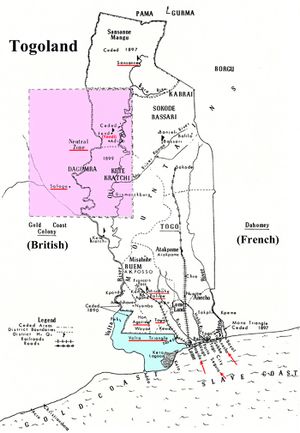 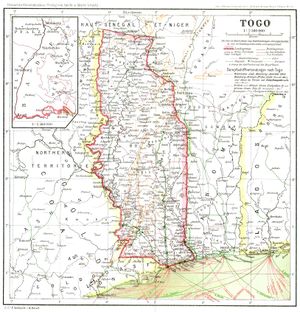 After calling on the German colony to surrender on 6 August 1914, French and British troops invaded unopposed the next day. No military personnel were stationed in the protectorate. The police force consisted of a commander and deputy commander, 10 German sergeants, 1 native sergeant and 660 Togolese policemen deployed throughout the territory.[6] The Entente forces occupied Lomé, then advanced on a powerful new radio station near Kamina, east of Atakpamé. The colony surrendered on 26 August 1914, after the German technicians who had built the radio installation destroyed the station during the night of 24/25 August. In the weeks before the destruction, Kamerun, German Southwest Africa, German East Africa and 47 ships on the high seas were sent reports of Allied actions, as well as warnings of trouble ahead.[7] On 27 December 1916, Togoland was separated into French and British administrative zones. After the end of World War I, newly established Czechoslovakia tried unsuccessfully to acquire the colony.[بحاجة لمصدر]. Following the ratification of the Treaty of Versailles, on 20 July 1922, Togoland formally became a League of Nations Class B mandate divided into French Togoland and British Togoland, covering respectively about two-thirds and one-third of the territory.[8]

The British area of the former German colony was integrated into Ghana in 1957 after a May 1956 plebiscite in which 58% of British-area residents voted to join Ghana upon its independence, rather than remaining under British-administered United Nations Trusteeship.

The French-ruled region became the Republic of Togo in 1960 and is now known as the Togolese Republic. In 1960, the new state invited the last German governor of Togoland, Duke Adolf Friedrich of Mecklenburg, to the country's official independence celebrations.[9]

In 1914 a series of drafts were made for proposed Coat of Arms and Flags for the German Colonies. However, World War I broke out before the designs were finished and implemented and the symbols were never actually taken into use. Following the defeat in the war, Germany lost all its colonies and the prepared coat of arms and flags were therefore never used.