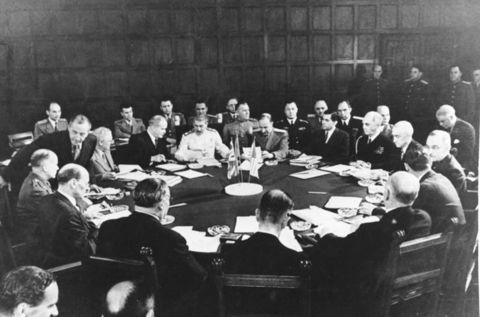 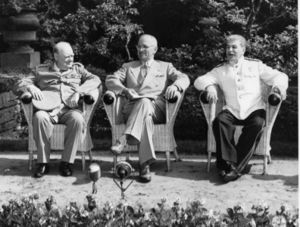 On July 26, the United States, Britain, and China released the declaration announcing the terms for Japan's surrender, with the warning as an ultimatum: "We will not deviate from them. There are no alternatives. We shall brook no delay." For Japan, the terms of the declaration specified:[1]

On the other hand, the declaration offered:

The mention of "unconditional surrender" came at the end of the declaration:[1]

Contrary to what had been intended at its conception, which was to disenfranchise the Japanese leadership so that the people would accept a mediated transition, the declaration made no direct mention of the Japanese emperor at all. However, it insisted that "the authority and influence of those who have deceived and misled the people of Japan into embarking on world conquest must be eliminated for all time"[4] Allied intentions on issues of utmost importance to the Japanese, including the extent and number of Allied "occupation points," the fate of Japan's minor islands, and the extent to which the Allies planned to "control" Japan's "raw materials," as well as whether Hirohito was to be regarded as one of those who had "misled the people of Japan" or he might potentially become part of "a peacefully inclined and responsible government," were thus left unstated, which essentially made it a blank check for the Allies.[5]

The "prompt and utter destruction" clause has been interpreted as a veiled warning about American possession of the atomic bomb, which had been successfully tested in New Mexico on July 16, 1945, the day before the opening of the conference. Although the document warned of further destruction like the Operation Meetinghouse raid on Tokyo and other carpetbombing of Japanese cities, it did not mention anything about the atomic bomb.

A major aspect about the Potsdam Declaration was that it was intended to be ambiguous. It is not clear from the document itself whether a Japanese government would remain under Allied occupation or the occupation would be run by a foreign military government. In the same manner, it was not clear whether after the end of the occupation, Japan was to include any territory other than the four main Japanese islands. That ambiguity was intentional on the part of the US government to allow the Allies a free hand in running the affairs of Japan afterwards.[6]

The declaration was released to the press in Potsdam on the evening of July 26 and simultaneously transmitted to the Office of War Information (OWI) in Washington. By 5 p.m. Washington time, OWI's West Coast transmitters, aimed at the Japanese home islands, were broadcasting the text in English, and two hours later they began broadcasting it in Japanese. Simultaneously, American bombers dropped over 3 million leaflets, describing the declaration, over Japan.[7] The declaration was never transmitted to the Japanese government by diplomatic channels.[8] Although picking up enemy propaganda leaflets and listening to foreign radio broadcasts was illegal in Japan, the American propaganda efforts were successful in making the key points of the declaration known to most of the Japanese people.[بحاجة لمصدر]

The terms of the declaration were hotly debated within the Japanese government. Upon receiving the declaration, Foreign Minister Shigenori Tōgō hurriedly met with Prime Minister Kantarō Suzuki and Cabinet Secretary Hisatsune Sakomizu. Sakomizu recalled that all felt the declaration must be accepted. Despite being sympathetic to accepting the terms, Tōgō felt it was vague about the eventual form of government for Japan, disarmament, and the fate of accused war criminals. He also still had hope that the Soviet Union would agree to mediate negotiations with the Western Allies to obtain clarifications and revisions of the declaration's terms. Shortly afterwards, Tōgō met with Emperor Hirohito and advised him to treat the declaration with the utmost circumspection, but that a reply should be postponed until the Japanese received a response from the Soviets to mediate peace. Hirohito stated that the declaration was "acceptable in principle."

Meanwhile, the Supreme Council for the Direction of the War met the same day to discuss the declaration. War Minister Korechika Anami, General Yoshijirō Umezu, and Admiral Soemu Toyoda opposed accepting the declaration, argued that the terms were "too dishonorable," and advised for the Japanese government to reject it openly. Suzuki, Tōgō, and Admiral Mitsumasa Yonai leaned towards accepting it but agreed that clarification was needed over the status of the Emperor. Tōgō's suggestion for the government not to respond until it received the Soviet response was accepted.[9]

At a press conference with the Japanese press in Tokyo, Suzuki offered the following statement, given here in both English and Japanese languages:

My thinking is that the joint declaration is virtually the same as the earlier declaration. The government of Japan does not consider it having any crucial value. We simply mokusatsu suru. The only alternative for us is to be determined to continue our fight to the end.[10]

Suzuki stated that the Japanese policy toward the declaration was one of mokusatsu (黙殺code: ja is deprecated , lit. "killing with silence"), which the United States interpreted as meaning "rejection by ignoring." That led to a decision by the White House to carry out the threat of destruction.[11] After the White House decision, the United States Army Air Forces dropped the first atomic bomb on the Japanese city of Hiroshima on August 6, 1945 and then the second atomic bomb on the Japanese city of Nagasaki on August 9, 1945. Both bombings devastated the two cities, killing tens of thousands of people and destroying much of the cities' infrastructure as well as military bases and factories in a matter of seconds in a radius that stretched for more than 1 mile (1.6 kilometers).

On August 9, 1945, Joseph Stalin, based on a secret agreement at the Yalta Conference in February, unilaterally abrogated the 1941 Soviet–Japanese Neutrality Pact (1941) and declared war on Japan. Thus began the Soviet–Japanese War, with the Soviets invading Manchuria on three fronts.

However, the word mokusatsu can also mean "withholding comment."[11] Since then, it has been alleged that the bombings of Hiroshima and Nagasaki were attributable to English translations of mokusatsu having misrepresented Suzuki as rejecting the terms of the Potsdam Declaration;[12][13] however, this claim is not universally accepted.[14]

In a widely-broadcast speech after the bombing of Hiroshima, which was picked up by Japanese news agencies, Truman warned that if Japan failed to accept the terms of the Potsdam Declaration, it could "expect a rain of ruin from the air, the like of which has never been seen on this earth."[15] As a result, Suzuki felt compelled to meet the Japanese press, and he reiterated his government's commitment to ignore the Allies' demands and fight on.[16]

However, soon after that statement, it became clear to many that surrender was a realistic option. The thoroughness of the Allies' demands and the fact they were made public forced the Japanese leaders and populace to realize the success that Japan's enemies had achieved in the war.[17] After the receipt of the Potsdam Declaration, the Japanese government attempted to maintain the issue of the Emperor's administrative prerogative within the Potsdam Declaration by its surrender offer of August 10, but in the end, it had to take comfort with US Secretary of State James F. Byrnes' reply: "From the moment of surrender the authority of the Emperor and the Japanese Government to rule the state shall be subject to the Supreme Commander of the Allied powers who will take such steps as he deems proper to effectuate the surrender terms."[18] Thus, at 1200 JST on August 15, 1945, the Emperor announced his acceptance of the Potsdam Declaration, which culminated in the surrender documents signature on board the يوإس‌إس Missouri on September 2, 1945. The radio announcement to the Japanese people was the first time many of them had actually heard the voice of the Emperor.[19]