Upon defeat of Nazi Germany in World War II, the victorious Allies asserted joint authority and sovereignty over 'Germany as a whole', defined as all territories of the former German Reich west of the Oder–Neisse line, having declared the destruction of Nazi Germany at the death of Adolf Hitler (see 1945 Berlin Declaration). The four powers divided 'Germany as a whole' into four occupation zones for administrative purposes, under the United States, United Kingdom, France and the Soviet Union respectively; creating what became collectively known as Allied-occupied Germany (بالألمانية: Alliierten-besetztes Deutschland). This division was ratified at the Potsdam Conference (17 July to 2 August 1945).قالب:Citation needed lead The four zones were as agreed in February 1945 by the United States, United Kingdom and Soviet Union meeting at the Yalta Conference; setting aside an earlier division into three zones (excluding France) proposed by the London Protocol.

At Potsdam, the United States, United Kingdom and the Soviet Union approved the detachment from 'Germany as a whole' of the German eastern territories east of the Oder–Neisse line; with the exact line of the boundary to be determined at a final German Peace Treaty. This treaty was expected to confirm the "shifting westward" of Poland's borders, as the United Kingdom and the United States committed themselves to support in any future peace treaty the permanent incorporation of former eastern German territories into Poland and the Soviet Union. From March 1945 to July 1945, these former eastern territories of Germany had been administered under Soviet military occupation authorities, but following the Potsdam Conference they were handed over to Soviet and Polish civilian administrations and ceased to constitute part of Allied-occupied Germany.

In the closing weeks of fighting in Europe, United States forces had pushed beyond the agreed boundaries for the future zones of occupation, in some places by as much as 320 kم (200 ميلs). The so-called line of contact between Soviet and American forces at the end of hostilities, mostly lying eastward of the July 1945-established inner German border, was temporary. After two months in which they had held areas that had been assigned to the Soviet zone, U.S. forces withdrew in the first days of July 1945.[1] Some have concluded that this was a crucial move that persuaded the Soviet Union to allow American, British and French forces into their designated sectors in Berlin, which occurred at roughly the same time (July 1945), although the need for intelligence gathering (see Operation Paperclip) may also have been a factor.[2] 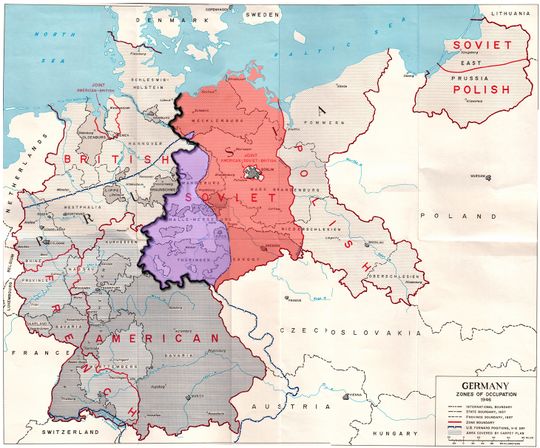 Allied zones of occupation in post-war Germany, highlighting the Soviet zone (red), the inner German border (black line), and the zone from which American troops withdrew in July 1945 (purple). The provincial boundaries correspond largely to those of the pre-war states, before the creation of the present Länder (federal states).

The American zone in Southern Germany consisted of Bavaria with its traditional capital Munich and Hesse with a new capital in Wiesbaden, and of parts of Württemberg and Baden. Those formed Württemberg-Baden and are the northern portions of the present-day German state of Baden-Württemberg.

The ports of Bremen (on the lower Weser River) and Bremerhaven (at the Weser estuary of the North Sea) were also placed under American control because of the American request to have certain toeholds in Northern Germany.

At the end of October 1946, the American Zone had a population of:

The headquarters of the American military government was the former IG Farben Building in Frankfurt am Main.

Within the British Zone of Occupation, the CCG/BE re-established the German state of Hamburg, but with borders that had been drawn by Nazi Germany in 1937. The British also created the new German states of:

Also in 1947, the American Zone of Occupation being inland had no port facilities – thus the Free Hanseatic City of Bremen and Bremerhaven became exclaves within the British Zone.

The British headquarters were originally based in Bad Oeynhausen from 1946, but in 1954 it was moved to Mönchengladbach where it was known as JHQ Rheindahlen.

Army units from other nations were stationed within the British occupation zone. The Belgians were allocated a territory which was garrisoned by their troops.[4] The zone formed a 200 kiloمترs (660,000 قدم) strip from the Belgian-German border at the south of the British zone, and included the important cities of Cologne and Aachen. The Belgian army of occupation in Germany (known as the Belgian Forces in Germany from 1951) became autonomous in 1946 under the command, initially, of Jean-Baptiste Piron.[5]

Belgian soldiers would remain in Germany until 31 December 2005.[6]

Polish units mainly from 1st Armoured Division also had a place in the occupation; they were stationed in the northern area of the district of Emsland as well as in the areas of Oldenburg and Leer. This region bordered the Netherlands and covered an area of 6,500 km². The zone had a large camp constructed largely for displaced persons and was administered by the Polish government in exile. The administrative centre of the Polish occupation zone was the city of Haren. The city was nicknamed named Maczków after Stanisław Maczek during this time.

In 1946, the Norwegian Brigade Group in Germany had 4,000 soldiers in Hanover.

Another special feature of the British zone was the Enclave of Bonn. It was created in July 1949 and was not under British or any other allied control. Instead it was under the control of the Allied High Commission.

Included in the French zone was the town of Büsingen am Hochrhein, a German exclave separated from the rest of the country by a narrow strip of neutral Swiss territory. The Swiss government agreed to allow limited numbers of French troops to pass through its territory in order to maintain law and order in Büsingen.[بحاجة لمصدر]

At the end of October 1946, the French Zone had a population of:

From November 1945, Luxembourg was allocated a zone within the French sector.[7] The Luxembourg 2nd Infantry Battalion was garrisoned in Bitburg and the 1st Battalion was sent to Saarburg.[7] The final Luxembourg forces in Germany, in Bitburg, left in 1955.[7] 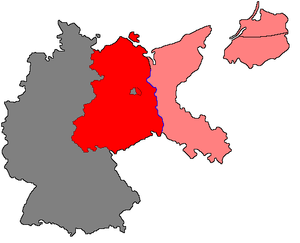 Pink: portions of Germany east of the Oder–Neisse line attached to Poland (except for northerly East Prussia and the adjoining Memel Territory, not shown here, which were joined directly to the Soviet Union.) Red: the Soviet Occupation zone of Germany. 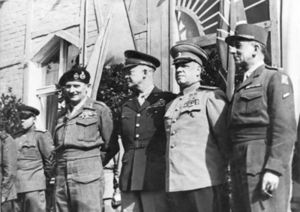 While located wholly within the Soviet zone, because of its symbolic importance as the nation's capital and seat of the former Nazi government, the city of Berlin was jointly occupied by the Allied powers and subdivided into four sectors. All four occupying powers were entitled to privileges throughout Berlin that were not extended to the rest of Germany – this included the Soviet sector of Berlin which was legally separate from the rest of the Soviet zone.

Governance and the emergence of two German states

The original Allied plan to govern Germany as a single unit through the Allied Control Council broke down in 1946–1947 due to growing tensions between the Allies, with Britain and the US wishing cooperation, France obstructing any collaboration in order to unwind Germany into many independent states, and the Soviet Union unilaterally implementing from early on elements of a Marxist political-economic system (enforced redistribution of land, nationalisation of businesses). Another dispute was the absorption of post-war expellees. While the UK, the US and the Soviet Union had agreed to accept, house and feed about six million expelled German citizens from former eastern Germany and four million expelled and denaturalised Czechoslovaks, Poles, Hungarians and Yugoslavs of German ethnicity in their zones, France generally had not agreed to the expulsions approved by the Potsdam agreement (a decision made without input from France). Therefore, France strictly refused to absorb war refugees who were denied return to their homes in seized eastern German territories or destitute post-war expellees who had been expropriated there, into the French zone, let alone into the separated Saar protectorate.[8] However, the native population, returning after Nazi-imposed removals (e.g., political and Jewish refugees) and war-related relocations (e.g., evacuation from air raids), were allowed to return home in the areas under French control. The other Allies complained that they had to shoulder the burden to feed, house and clothe the expellees who had to leave their belongings behind. 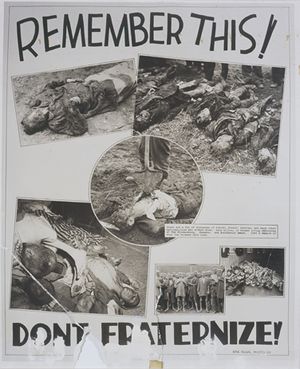 At the end of the war, General Eisenhower issued a non-fraternization policy to troops under his command in occupied Germany. This policy was relaxed in stages. By June 1945 the prohibition on speaking with German children was made less strict. In July it became possible to speak to German adults in certain circumstances. In September the policy was completely dropped in Austria and Germany.

Nevertheless, due to the large numbers of Disarmed Enemy Forces being held in Rheinwiesenlagers throughout western Germany, the Americans and the British – not the Soviets – used armed units of Feldgendarmerie to maintain control and discipline in the camps. In June 1946, these German military police units became the last Wehrmacht troops to surrender their arms to the western powers.

By December 1945 over 100,000 German civilians were interned as security threats and for possible trial and sentencing as members of criminal organisations.

The last Allied war advances into Germany and Allied occupation plans were affected by rumors of Nazi plans for insurgency (the Nazi Werwolf plan), and successful Nazi deception about plans to withdraw forces to Alpenfestung redoubt. This base was to be used to conduct guerrilla warfare, but the rumours turned out to be false. It has been estimated that no Allied deaths can be reliably attributed to any Nazi insurgency.[9]

The Potsdam conference, where the victorious Allies drew up plans for the future of Germany, noted in article XIII of the Potsdam Agreement on 1 August 1945 that "the transfer to Germany of German populations (...) in Poland, Czechoslovakia and Hungary will have to be undertaken"; "wild expulsion" was already going on.

Chairman of the Soviet Control Commission