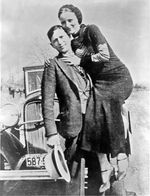 May 23: Bonnie and Clyde killed in a police ambush.

King Albert I of Belgium