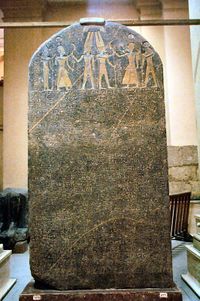 The Iron Age kingdom of Israel (blue) and kingdom of Judah (tan), with their neighbours (8th century BCE), based on Biblical accounts

The name Israel first appears in the stele of the Egyptian pharaoh Merneptah c. 1209 BC, "Israel is laid waste and his seed is not."[3] This "Israel" was a cultural and probably political entity of the central highlands, well enough established to be perceived by the Egyptians as a possible challenge to their hegemony, but an ethnic group rather than an organized state.[4] Ancestors of the Israelites may have included Semites who occupied Canaan and the Sea Peoples.[5] According to modern archaeologists, sometime during Iron Age I a population began to identify itself as 'Israelite', differentiating itself from the Canaanites through such markers as the prohibition of intermarriage, an emphasis on family history and genealogy, and religion.[6] 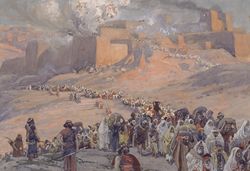 The Assyrian Empire was overthrown in 612 BCE by the Medes and the Neo-Babylonian Empire. In 586 BCE King Nebuchadnezzar II of Babylon conquered Judah.

One of the 21 LMLK seals found near the ancient city of Lachish, which has an inscription written in Paleo-Hebrew alphabet and is dated from the reign of Hezekiah The extent of the Hasmonean kingdom

In 332 BCE the Persians were defeated by Alexander the Great. After his death in 322 BCE, his generals divided the empire between them and Judea became the frontier between the Seleucid Empire and Ptolemaic Egypt, but in 198 Judea was incorporated into the Seleucid Kingdom.

In 63 BCE the Roman general Pompey sacked Jerusalem and made the Jewish kingdom a client of Rome. The situation was not to last, as the deaths of Pompey in 48 BCE and Caesar in 44 BCE, together with the related Roman civil wars, relaxed Rome's grip on Judea. This resulted in the Parthian Empire and their Jewish ally Antigonus the Hasmonean defeating the pro-Roman Jewish forces (high priest Hyrcanus II, Phasael and Herod the Great) in 40 BCE. They invaded the Roman eastern provinces and managed to expel the Romans. Antigonus was made King of Judea. Herod fled to Rome where he was elected "King of the Jews" by the Roman Senate and was given the task of retaking Judea. In 37 BCE, with Roman support, Herod reclaimed Judea and the short lived reemergence of the Hasmonean dynasty came to an end. From 37 BCE to 6 CE, the Herodian dynasty, Jewish-Roman client kings, ruled Judea. In 20 BCE, Herod began a refurbishment and expansion of the Second Temple in Jerusalem. His son, Herod Antipas, founded the Jewish city of Tiberias in the Galilee. 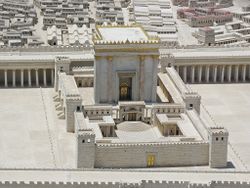 Judea under Roman rule was at first a client kingdom, but gradually the rule over Judea became less and less Jewish, until it became under the direct rule of Roman administration from Caesarea Maritima, which was often callous and brutal in its treatment of its Judean, Galilean, and Samaritan subjects. It was in this period that Rabbinical Judaism, led by Hillel the Elder, began to assume popular prominence over the Temple priesthood.

The sack of Jerusalem depicted on the Arch of Titus, Rome

انظر أيضاً: History of the Jews in the Byzantine Empire

Eshtemoa synagogue menorah, carved during the 3rd or 4th century. 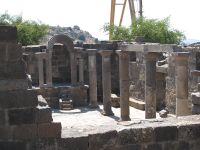 "Mother of the Arches" synagogue, Golan Heights, dated to the 6th-8th century

Early in the 4th century, Roman Empire split and Constantinople became the capital of the East Roman Empire known as the Byzantine Empire. Under the Byzantines, Christianity, dominated by the (Greek) Orthodox Church, was adopted as the official religion. Jerusalem became a Christian city and Jews were still banned from living there.

In 638 CE, the Byzantine Empire lost the Levant to the Arab Islamic Empire. According to Moshe Gil, at the time of the Arab conquest in 7th century, the majority of the population was Jewish or Samaritan.[7] According to one estimate, the Jews of Palestine numbered between 300,000 and 400,000 at the time.[8] After the conquest, the majority of the population became Arabized in culture and language, many also adopting the new faith of Islam.[9] Until the Crusades took Palestine in 1099, various Muslim dynasties controlled Palestine. It was first ruled by the Medinah-based Rashidun Caliphs, then by the Damascus-based Umayyad Caliphate and after by the Baghdad-based Abbasid Caliphs.

After the conquest, Jewish communities began to grow and flourish. Umar allowed and encouraged Jews to settle in Jerusalem. It was first time, after almost 500 years of oppressive Christian rule, that Jews were allowed to enter and worship freely in their holy city.[10] Seventy Jewish families from Tiberias moved to Jerusalem in order to help strengthen the Jewish community there.[11] But with the construction of the Dome of the Rock in 691 and the Al-Aqsa Mosque in 705, the Muslims established the Temple Mount as an Islamic holy site. The dome enshrined the Foundation Stone, the holiest site for Jews. Before Omar Abd al-Aziz died in 720, he banned the Jews from worshipping on the Temple Mount,[12] a policy which remained in place for over the next 1,000 years of Islamic rule.[13] In around 875, Karaite leader Daniel al-Kumisi arrived in Jerusalem and established an ascetic community of Mourners of Zion.[14] Michael the Syrian notes thirty synagogues which were destroyed in Tiberias by the earthquake of 749.[15]

In the mid-8th-century, taking advantage of the warring Islamic factions in Palestine, a false messiah named Abu Isa Obadiah of Isfahan inspired and organised a group of 10,000 armed Jews who hoped to restore the Holy Land to the Jewish nation. Soon after, when Al-Mansur came to power, Abu Isa joined forces with a Persain chieftain who was also conducting a rebellion against the caliph. The rebellion was subdued by the caliph and Abu Isa fell in battle in 755.[16]

In 1039, part of the synagogue in Ramla was still in ruins, probably resulting from the earthquake of 1033.[17] Jews also returned to Rafah and documents from 1015 and 1080 attest to a significant community there.[18]

A large Jewish community existed in Ramle and smaller communities inhabited Hebron and the coastal cities of Acre, Caesarea, Jaffa, Ashkelon and Gaza.[بحاجة لمصدر] Al-Muqaddasi (985) wrote that "for the most part the assayers of corn, dyers, bankers, and tanners are Jews."[19] Under the Islamic rule, the rights of Jews and Christians were curtailed and residence was permitted upon payment of the special tax.

Between the 7th and 11th centuries, Masoretes (Jewish scribes) in the Galilee and Jerusalem were active in compiling a system of pronunciation and grammatical guides of the Hebrew language. They authorised the division of the Jewish Tanakh, known as the Masoretic Text, which is regarded as authoritative till today.[20] 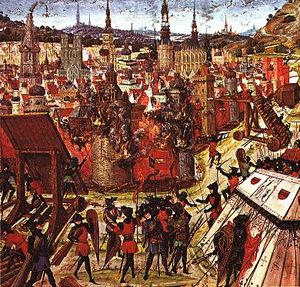 According to Gilbert, from 1099 to 1291 the Christian Crusaders "mercilessly persecuted and slaughtered the Jews of Palestine."[21] The كنيس آري في صفد. Founded in the 1570s, it was rebuilt in 1857 following an earthquake. 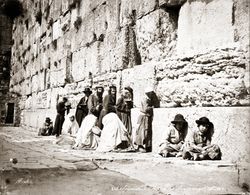 One of the earliest photographs of Jews praying at the Western Wall of Herod's Temple, 1870s. The Scroll of Ahimaaz (1050 CE) mentions the location as a Jewish prayer site.[22] In around 1560, Suleiman the Magnificent gave official recognition of the right of Jews to pray there.

Palestine was conquered by Turkish Sultan سليم الأول in 1516–17, and became part of the province of Syria for the next four centuries. 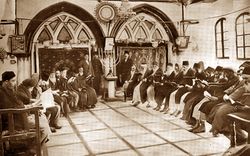 Installation of the Chacham Bashi at the Ben Zakai Synagogue, 1893. According to legend, the synagogue stands on the site of the study hall of 1st-century sage, Rabban Yochanan ben Zakai. The current building was constructed in 1610.

In the 1648–1654 Khmelnytsky Uprising in the Ukraine over 100,000 Jews were massacred, leading to some migration to Israel. In 1660 (or 1662), the majorly Jewish towns of Safed and Tiberias are destroyed by the Druze, following a power struggle in Galilee. In 1665, the events surrounding the arrival of the self-proclaimed Messiah Sabbatai Zevi to Jerusalem, causes a massacre of the Jews in Jerusalem.[بحاجة لمصدر]

The Near East earthquake of 1759 destroys much of Safed killing 2000 people with 190 Jews among the dead, and also destroys طبرية.

The disciples of the Vilna Gaon settled in the land of Israel almost a decade after the arrival of two of his pupils, R. Hayim of Vilna and R. Israel ben Samuel of Shklov. In all there were three groups of the Gaon's students which emigrated to the land of Israel. They formed the basis of the Ashkenazi communities of Jerusalem and Safed, setting up what was known as the Kollel Perushim. Their arrival encouraged an Ashkenazi revival in Jerusalem, whose Jewish community until this time was mostly Sephardi. Many of the descendents of the disciples became leading figures in modern Israeli society. The Gaon himself also set forth with his pupils to the Land, but for an unknown reason he turned back and returned to Vilna where he died soon after.

During the siege of Acre in 1799, Napoleon issued a proclamation to the Jews of Asia and Africa to help him conquer Jerusalem. The siege was lost to the British, however, and the plan was never carried out. In 1821 the brothers of murdered Jewish adviser and finance minister to the rulers of the Galilee, Haim Farkhi formed an army with Ottoman permission, marched south and conquered the Galilee. They were held up at Akko which they besieged for 14 months after which they gave up and retreated to Damascus.

During Muhammad Ali of Egypt's occupation in 1834, Jews were targeted in pogroms in Hebron, Safed and Jerusalem. In 1844, Jews constituted the largest population group in Jerusalem and by 1890 an absolute majority in the city, but as a whole the Jewish population made up far less than 10% of the region.[23][24]

In 1888, Professor Sir John William Dawson wrote: Immigration took place from Europe, from North Africa (mainly to Jaffa) and from the Yemen.[25]

"Until today (1888), no people has succeeded in establishing national dominion in the Land of Israel. No national unity, in the spirit of nationalism, has acquired any hold there. The mixed multitude of itinerant tribes that managed to settle there did so on lease, as temporary residents. It seems that they await the return of the permanent residents of the land."[26]

المقالة الرئيسية: Chronology of the Jewish settlement in the land of Israel in modern times The borders of the British Mandate

Between 1882 and 1948, a series of Jewish migrations to what is the modern nation of Israel, known as Aliyahs commenced. These migrations preceded the Zionist period. 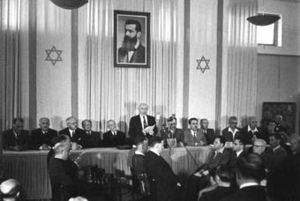 On 14 May 1948, one day before the end of the British Mandate, the leaders of the Jewish community in Palestine led by the future prime minister David Ben-Gurion, declared the establishment of a Jewish state in Eretz-Israel, to be known as the State of Israel.[27][28] 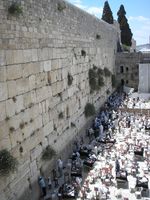