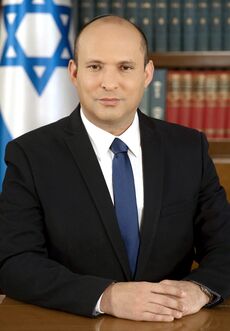 The 13th, and current Prime Minister of Israel Naftali Bennett

This article lists the prime ministers of Israel since the adoption of the Israeli Declaration of Independence in 1948.

2  Eshkol died while in office. Yigal Allon briefly served as Acting Prime Minister until he was replaced by Meir.

3  Rabin resigned and called for early elections in December 1976. After he was re-elected as the Alignment's leader, he resigned as candidate for the upcoming elections on 7 April 1977, but legally remained Prime Minister until Begin's first government was formed. However, Shimon Peres unofficially served as Acting Prime Minister from 22 April 1977 until 21 June 1977.

4  Until 1988, Likud was simply an electoral alliance between Herut and the Liberal Party, much like Alignment. A single united Likud party was only established in 1988.

6  Rabin was assassinated while in office. Shimon Peres served as Acting Prime Minister until 22 November 1995.

7  On 21 November 2005, Prime Minister Sharon, along with several other ministers and MKs, split from Likud over the issue of disengagement from the Gaza Strip and negotiations over the final status of the West Bank. Sharon formed a new party, Kadima, which would go on to compete in the following elections of March 2006. Sharon continued as Prime Minister.

10  The following parties were members of a government during only part of its term: