النظام القضائي الإسرائيلي يتألف من محاكم دنيوية ودينية. The law courts constitute a separate and independent unit of Israel's Ministry of Justice. The system is headed by the President of the Supreme Court and the Minister of Justice.[1]

تقع المحكمة العليا في القدس،[3] has ultimate appellate jurisdiction over all other civil and military courts, and in some cases original jurisdiction in criminal and civil cases. As an appellate court, it considers appeals on judgement and other decisions by the district courts, and in rare cases it takes appeals from the labor and military court systems. It also considers appeals on a judicial and quasi-judicial cases of various kinds, such as matters relating to the legality of Knesset elections and disciplinary rulings of the Bar Association. Sitting as the High Court of Justice, it acts as a court of first instance, often in matters concerning the legality of decisions regarding state authorities. The High Court of Justice or otherwise the Israeli Supreme Court acts sometimes not as an appellate body to the district court but as an overseer of justice against the lower courts. 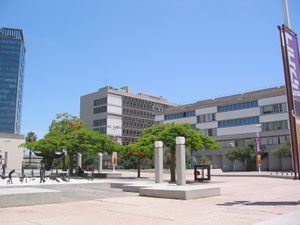 The district courts constitute the middle level courts of the judicial system, and have jurisdiction in any matter not within the sole jurisdiction of another court. In criminal matters, the courts have jurisdiction over cases where the accused faces a penalty of at least seven years imprisonment. In civil cases, they have jurisdiction over cases in which more than two and a half million shekels are in dispute. District courts also hear appeals of judgments of the magistrate courts, as well as cases involving companies and partnership, arbitration, prisoners petitions, and appeals on tax matters.[4] Sitting as courts for administrative matters, they can hear petitions against arms of the government. One also sits as the court of admiralty, hearing all cases involving shipping commerce, accidents on the sea and the like. Most cases are heard by a single judge, though the court president can choose to appoint a three-judge panel. Cases where the accused is charged with an offense punishable by at least ten years in prison and appeals from magistrate courts are heard by three-judge panels. There are six such courts,[5] one in each district of Israel.

The Magistrate courts serve as basic trial courts. In criminal matters, they hear cases where the accused faces up to seven years imprisonment, and in civil cases, have jurisdiction over matters up to two and a half million shekels. They have jurisdiction over the use and possession of real property. The courts also act as traffic courts, municipal courts and family courts.[4] Sitting as small-claims courts, they have jurisdiction over cases involving claims up to 30,000 shekels. Rather than following standard evidentiary rules, they require extensive pleadings and documentation upon filing of a formally written complaint. Verdicts are expected seven days from trial. Cases are heard by a single judge unless the court president decides to appoint a three-judge panel. There are 30 magistrate courts.[5] 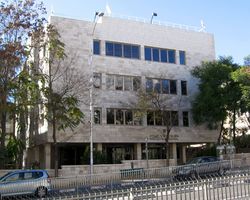 There are five Regional Labor Courts in Israel acting as tribunals of first instance, and a National Labor Court in Jerusalem which hears appeals from the regional courts, as well as a few cases of national importance as a court of first instance. Cases in Regional Labor Courts are heard by three judges consisting of one professional judge and two lay judges, one of whom has experience in the labor sector and another who has experience in management. Appeals to the National Labor Court are heard by five judges, three professional judges and two lay judges.[6] In rare instances, a ruling from the National Labor Court can be further appealed to the Supreme Court. They are vested with exclusive jurisdiction over cases involving employer-employee relationship, pre-employment, post-employment strikes and labor union disputes, as well as labor related complaints against the National Insurance Institute, and claims under the National Health Insurance Law.

In the Israel Defense Forces, a legal system separate from the civilian legal system is maintained. It is overseen by the Military Advocate General, and has a system of military courts to try soldiers for criminal offenses and deal with criminal and security cases in the Israeli-occupied territories. All three of Israel's military districts, the ground, air, and maritime branches of the military, the Home Front Command, and the General Staff have military courts. There is also a special military tribunal, and field tribunals can be set up in times of war. The Military Court of Appeals is the supreme military court of Israel. It handles appeals from both the prosecution and defense in lower military courts. In special instances, a decision of the Military Court of Appeals can be further appealed to the Supreme Court, but special permission from the Supreme Court is required, and permission is generally granted only when there is a significant legal issue.

Judges who serve on the Supreme Court, as well as the district and magistrate courts, are appointed by the Judicial Selection Committee, which consists of nine members: the Minister of Justice, another cabinet member, two Knesset members (in practice one is from the coalition and the other is from the opposition), two members of the Israel Bar Association, and the President of the Supreme Court and two other Supreme Court justices. The committee is chaired by the Minister of Justice. It can appoint judges to the district and magistrate courts by a majority vote, but appointing a Supreme Court judge requires a majority of at least 7 to 9 or two less than the number present at the meeting.

Israel maintains a system of religious courts for the Jewish, Muslim, Druze, and Christian populations. These courts have jurisdiction over cases such as marital issues, conversion, and appointment to religious leadership positions.

Divorce of a Jewish couple can only be obtained at the Rabbinical Batei Din. However, if a petition for ancillary matrimonial reliefs, such as custody, support or equitable distribution of property is filed with the Civil Courts before a case for divorce is opened at the Batei Din, then all other marital issues may also be taken by Magistrate Courts sitting as Family Courts. Otherwise, if one spouse opens some sort of an action with the Batei Din, (including asking the couple for reconciliation), the Batei Din assume that all ancillary relief is aggregated into the main complaint, and the spouses may find themselves facing judicial determination pursuant to Halakha (Jewish religious law), and not pursuant to the secular law. Thus, spouses may lose the equal protection and anti gender discrimination protections of the secular civil law.

Since the Chief Rabbinate is controlled by the ultra-Orthodox sects, other streams such as the Reform and Conservative streams are isolated from official positions. There is also a struggle within the Orthodox world to allow more rabbis to perform marriages and to allow alternative views.[7]

The Islamic courts of Israel are known as Sharia courts. These courts have more control over family affairs than other religious courts do. They are supervised by their own official religious establishments. Their judges, known as qadis, are elected by the Knesset. This is the maintenance of an agreement reached with the British Mandatory Authorities before the State of Israel's establishment in 1948. There are nine regional Sharia courts and the Sharia Court of Appeals.

The Druze courts have jurisdiction over Israeli Druze in matters of marriage and divorce, and are overseen by the Ministry of Justice. Their judges are known as kadi-madhabs. There are two regional courts and the Druze Court of Appeals.

All lawyers in Israel must receive a license to practice law and be admitted to the Israel Bar Association to practice law. To practice law, a lawyer must go through a three-step process. They must first obtain a law degree from an educational institution recognized by the Law Faculty of the Hebrew University of Jerusalem, or alternatively, those moving to Israel and not holding a law degree from a recognized institution in Israel must have at least two years' practical experience as an attorney or judge in their country of origin. They then must take a Hebrew proficiency examination and examinations on eight separate areas of law: obligations and labor law, property law, family and succession law, criminal law and procedure, civil procedure and professional ethics, constitutional and administration law, commercial law on corporations, partnerships, and other associations, and commercial law on bankruptcy, liquidations, bills, exchange, and tax law.

After passing these exams, candidates must serve as an articled clerk of twelve months, at least 36 hours a week, 25 of which must be worked before 2:00 PM on that day. After serving their articles, candidates must pass the final examinations, which consist of a written examination and an oral examination before three judges. Candidates who arrived from abroad, have at least five years of professional legal experience, and began their articles within ten years of arriving in Israel are exempt from the final examinations. The final examinations deal with court procedure, procedure for registering land rights in real estate, procedure for registering corporations, partnerships, and liquidations, interpretation of laws and judicial documents, professional ethics, evidence, and recent changes in case law and legislation. Those who pass the written examination may take the oral examination. If they pass, they are admitted to the Israel Bar Association and given licenses to practice law.[8]

As of 2012, there are 52,142 active lawyers in Israel, making it the country with the highest number of active lawyers per capita in the world.[9] Law schools produce new graduates at the rate of 2,000 new lawyers a year. This creates a tight and highly competitive market.