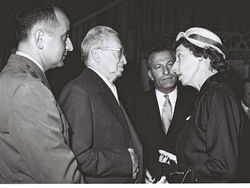 In the 1930s, during the conflict over British restrictions on Jewish immigration prior to the establishment of Israel, Prime Minister Mackenzie King, who was tainted by anti-Semitism, passively London's policies.[1] In general, this was not an issue for Canadians, although some, such as the Roman Catholic Church in Quebec, expressed hostility toward Zionism and Jews, based on theological prejudices.[2][3]

In 1947, Canada was represented on the United Nations Special Committee on Palestine (UNSCOP). Canada was one of the 33 countries that voted in favour of the 1947 UN partition resolution, which led to the establishment of the State of Israel despite heavy pressure from the United Kingdom on the Commonwealth of Nations to abstain.

Canada granted de facto recognition to Israel in December 1948, and full de jure recognition on May 11, 1949, after the Jewish state was admitted into the United Nations (UN). A week later, Avraham Harman was appointed Israel's first Consul General to Canada. In September 1953, the Canadian Embassy opened in Tel Aviv and Michael Comay became Israeli Ambassador to Canada. A Canadian ambassador to Israel was appointed in 1958.

The Embassy of Israel in Canada is located at 50 O'Connor Street, in Ottawa, the Canadian capital. Israel also operates Canadian regional consulates in Montreal and Toronto.[4] 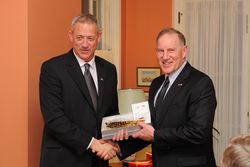 In May 1961, David Ben-Gurion was the first Israeli Prime Minister to make an official visit to Canada, and since then, officials from both countries have made frequent trips. Members of Parliament, Cabinet Ministers and Justices of the Supreme Court of Canada have visited, Israel demonstrating the ever strengthening relationship and cooperation. In addition, the premiers of Manitoba, Prince Edward Island, Ontario and Alberta and cabinet ministers from other provinces, have led successful commercial and cultural missions to Israel. A number of Canadian municipalities are twinning with Israeli cities.

In 1957, after the Sinai Campaign, Lester Pearson, the Secretary of State for External Affairs, received the Nobel Peace Prize for successfully leading the process by which UN peace keeping troops were stationed along the border between Israel and Egypt. Canadian troops also played a central role in the United Nations Emergency Force (UNEF). This role is part of the wider Canadian commitment to efforts designed to end the Arab-Israel conflict.[1] Later, in the late 1970s, Canada encouraged the peace negotiations between Israeli Prime Minister Begin and Egyptian President Sadat, and Begin stopped in Canada and met with Prime Minister Trudeau in 1977.

In general, while diplomatic relations were cordial, they were not particularly close during this period. A number of Canadian diplomats, like their European counterparts, tended to support the Arab positions against Israel in the United Nations and other frameworks. The Canadian Arabists, such as Ambassador Michael D. Bell, sought to align policy with the Arab states in order to promote commercial interests, and to gain Arab support for Canadian candidates and positions, in the United Nations. These positions generated considerable friction with Israel, and were criticized as a departure from Canadian moral policies.

Canada's support for Israel received strong public endorsement during the 1991 Gulf War, during which Iraqi missiles were fired into Israel. As part of the US-led coalition against Saddam Hussein, Canadian forces also were allied with Israel's.

In the multilateral negotiations that took place after the 1991 Madrid Middle East Peace Conference, Canada agreed to head the multilateral working group on Palestinian refugee issues. Although a number of meetings were held and different options were discussed, no agreements were reached. In 1995, the multilateral talks reached an impasse.[5]

With the election of Stephen Harper's government in 2006 the relationship between the two countries strengthened considerably.[6] Harper's government played a direct role in forming policy for the region, seeking to adjust the positions to be in conformity with the principles of the Conservative majority. The diplomats who promoted anti-Israel and Arabist policies lost influence.

As radical and occasionally violent anti-Israel political movements spread to Canada, including university campuses through provocative events such as Israel Apartheid Week, Canadian government officials and MPs from different parties expressed opposition. In 2010, Conservative MP Tim Uppal introduced a motion in the House of Commons condemning IAW "for seeking to delegitimize the State of Israel by equating it with the racist South African apartheid regime." NDP and Bloc Québécois members refused to agree to its unanimous passage. The Bloc submitted its own motion, which also criticized use of the word "apartheid" but added a clause, stating not every criticism of Israel is anti-Semitic. The result was that all parties, with the exception of some NDP members, denounced Israeli Apartheid Week.[7]

On April 29, 2009, to mark the 61st anniversary of the State of Israel, PM Stephen Harper said "We count ourselves among Israel’s closest partners. Since its founding in 1948, Canada has supported Israel and its right to live in peace and security with its neighbours. We value this relationship and look forward to continued friendship and collaboration."[8]

In a magazine interview published February 12, 2010, Environment Minister Peter Kent said: “Prime Minister Harper has made it quite clear for some time now and has regularly stated that an attack on Israel would be considered an attack on Canada.” [9][10]

In 2013, Vivian Bercovici from Toronto was appointed as the Canadian Ambassador to Israel, and she served until June 2016.

Following the return of the Liberal Party to power under Prime Minister Justin Trudeau in 2015, relations between Canada and Israel remained largely unchanged. In September 2016, Trudeau headed the Canadian delegation to the state funeral of Israeli leader Shimon Peres, and in his condolence message, stated: “Mr. Peres was an internationally-respected statesman and a great friend to Canada. He visited our country often, and helped build relations that remain strong to this day." [11]

Canada, Israel and the UN

Canada's activities and policies in the United Nations arena are generally a major expression of and component of its foreign policy, and the issues surrounding Israel receive disproportionate attention in the UN, due largely to the hostility of the Arab League and the Organisation of Islamic Cooperation, which form the largest voting bloc in the international body.[12] In 1947, Canada was represented on the United Nations Special Committee on Palestine (UNSCOP), and was among the 33 countries that voted in favour of the 1947 UN partition resolution, which led to the establishment of the State of Israel.

However, in order to avoid conflict and criticism from the oil-rich Arab countries, and reflecting the advice of the Arabists among the Canadian diplomatic corps, such as Michael D Bell for many years,[13] Canada either abstained or joined in voting against the numerous anti-Israel resolutions, in contrast to the United States, which voted with Israel. For many In the 1990s, the friction between Canada and Israel increased over this issue.

This policy changed under the Harper government, which voted more on the basis of support for and identification with Israeli democracy. On many anti-Israel resolutions introduced annually in the UN, Canada began to vote with Israel, the US, and Australia, and not with the Arab and Islamic blocs. For example, in the 2011 General Assembly Canada voted against a series of one-sided and strictly political resolution promoting "solidarity" with the Palestinians. [12]

In October 2010, Canada lost to Portugal in a vote for a seat at the Security Council, which has been attributed by some to the Arab and Islamic bloc's effort to punish Ottawa for not supporting anti-Israel agendas at the UN.[14][15][16] At a conference on combating anti-Semitism in Ottawa, November 8, 2010, Canadian PM Harper said “I know, by the way, because I have the bruises to show for it, that whether it is at the United Nations, or any other international forum, the easiest thing to do is simply to just get along and go along with this anti-Israeli rhetoric (...) There are, after all, a lot more votes — a lot more — in being anti-Israeli than in taking a stand. But, as long as I am prime minister, whether it is at the UN or the Francophonie or anywhere else, Canada will take that stand, whatever the cost. [17]

In 2016, Liberal Prime Minister Justin Trudeau announced that in 2020, Canada would seek election to the Security Council, raising concerns that in order to get support from the 57-nation Islamic bloc (the Organization of Islamic Cooperation), Ottawa would return to policies and votes for resolutions that targeted Israel.[18] 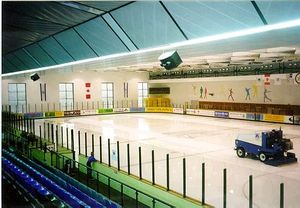 In the 1970s, the issue of Canadian complicity in the Arab economic warfare against Israel became an issue, particularly as cooperation with the boycott was illegal in the U.S., and was inconsistent with Canada's declaratory role as a global peace-maker. Ontario and Manitoba adopted anti-boycott policies, leading Prime Minister Trudeau to consider federal legislation to prohibit Canadians and Canadian companies from cooperating with the Arab economic boycott of Israel. When corporate interests dealing with Arab and Muslim opposed the legislation, fearing a backlash, Trudeau allowed the legislation to die.[19]

In 2012, Joe Oliver, Canadian Minister of Natural Resources, and Uzi Landau, the former Israeli Minister of Energy and Water Resources, announced the creation of the Canada-Israel Energy Science and Technology Fund to spur the development of energy technologies and processes for the development of unconventional oil and gas resources. The Fund is expected to generate $20 to $40 million in collaborative research and development over a period of three years. Two Canadian R & D workshops took place in March 2013, bringing together leading Canadian and Israeli stakeholders.[20] 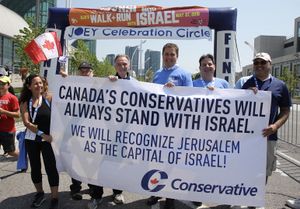 The Conservative Party of Canada announced in 2018 that if elected, they would recognize Jerusalem as the capital of Israel following the lead of President Trump's U.S. Embassy move

According to a COMPAS poll during the 2006 Lebanon War, the majority of Canadians believed Israel has a right to self-defense and Iran and Syria should not be sheltering Hezbollah, which is classified as a terrorist organization in Canada. 45% of Canadians opposed Harper's pro-Israeli stance. According to the COMPAS poll, 38 per cent of those polled believed Hezbollah started the war, and 35 per cent believe Israel started the war.[22]

According to a 2013 BBC World Service Poll, 25% of Canadians view Israel as having a positive influence.[23] An online poll, by Canada’s Sun News in 2014, indicated that 72% would support Israel in a war with Iran.[24]

In another poll conducted in 2012, 48% of Canadians supported their government favouring neither the Israelis nor the Palestinians.[25]

A poll conducted by Canada's Forum Research after the 2014 Israel–Gaza conflict, found that 26% of Canadians support Israel, while 17% support Palestinians. Despite Canadians' support for Israel, they still remain critical of Israel's policies, as 49% believed the attack on Gaza during that summer was not justified (against 30% who think it was), 42% agreed that Israel's use of force was out of proportion, and 41% disagreed that Hamas is the only one responsible for the deaths of innocent Gazans. However, a large majortiy of 73% believed Hamas' rocket attacks on Israel are unjustified.[26]

The Embassy of Israel in Ottawa is Israel's embassy in Canada. It is located at 50 O'Connor Street, suite 1005, in Ottawa, the Canadian capital. Israel also operates Canadian regional consulates in Montreal and Toronto. In May 2011, it was vandalized with a spray painted message which read "Embassy of War Crimes".[4]