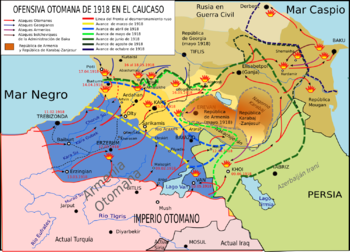 In December 1914, General Myshlaevsky ordered a withdrawal from Persia at the height of the Battle of Sarikamish.[3] Only one brigade of Russian troops under the command of the Armenian General Nazarbekoff and one battalion of Armenian volunteers scattered throughout Salmast and Urmia. Contact was limited to skirmishes on the border of northern Persia. The presence of Russian cavalry units kept them quiet.[3] Enver established [one division] troops from conscripted at Constantinople [December 25].[4] This unit was given under the command of Khalil Bey.[4] While Halil Bey's troops were preparing for the operation, a small group had already crossed the Persian frontier. After repulsing a Russian offensive toward Van, Van Gendarmerie Division [commanded by Major Ferid], a lightly equipped paramilitary formation, had chased the enemy into Persia.

في 1915, Wilhelm Wassmuss conferred with local chiefs and distributed pamphlets urging revolt. He was arrested by a local chief, but managed to escape from British custody. He hoped to incite a revolt through pro-German members of the Persian government in conjunction of invasion of Ottoman troops towards Kermanshah and Hamadan.[3]

On January 4, 1915, a volunteer detachment led by Omer Naci Bey, who was sent to Persia on a special mission by Talat Pasha, captured the city of Urmia. One week later, the "Mosul Group" commanded by Omer Fevzi Bey entered Tabriz, without facing much resistance. Apparently taking the Russian higher command completely by surprise. Though referred as Khalil Bey by Aram, Omer Fevzi with his [superior] forces captured the city of Urmia in a few hours and marched on Salmast.[4] At the end of 1914, Omer Fevzi who was identified as Khalil took nearly a thousand Russians prisoners.[4] On January 26–28, 1915, in Sufian area, General Chernozubov had a brief fighting. Russia sent a strong force which succeeded in recapturing the city. On January 30, Chernozubov entered Tabriz. 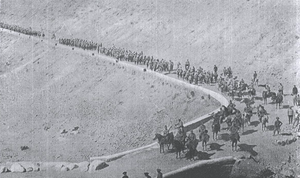 In April 1915, the 1st Expeditionary Force under the command of Halil Bey moved towards northern Persia. The objective was the city of Dilman, and to clean this region from Nazarbekov's forces, which would provide a significant tactical advantage in the Caucasian Campaign. Diliman was the place of one of the fiercest battles between the Armenians and the Turks.[4] The first battalion of the Armenian volunteers, under the command of the Andranik repulsed the attacks of Khalil Bey, until the Russian Chernozubov arrived[4] The newly arrived Russian forces from the Caucasus, they were able to put to flight Khalil Bey.[4] A poorly executed night raid on April 14 cost Halil Bey around 2,000 casualties. He lost 3,600 soldiers in the course of those three days.[4] General Nazarbekov managed to push Halil Pasha regulars towards Başkale after the Battle of Diliman (April 15, 1915), securing the situation.[3] Halil Bey received the following cable from Enver Pasha and leave this theater of war: "Van is silenced. Roads to Bitlis and Iraq are under danger. In order to avoid even greater threats, withdraw as soon as possible and join the Third Army which would take control of these gateways."

On May 8, 1915, one of the twelve Armenian messengers from the Siege of Van had got through to Persia[5] An Armenian volunteer unit with Andranik, along with 1200 men, and commander Chernoroyal's division dispatched toward the Bashkaleh. On May 7, they captured Bashkaleh. This group from Persia reach the City of Van on May 18.[5] They had expected to find Van still in a state of siege and were amazed at finding it in the hands of the Armenians.[5] When word got to Yudenich, he sent a brigade of Trans-Baikal Cossacks under General Trukhin. With Van secure, fighting shifted farther west for the rest of the summer.[3]

During July 1915, Russian forces at the Caucasus Campaign had a general retreat which one Russian column retreated up to Persian frontier. This retreat was the consequence of events at June 1915. Yudenich planned an attack to limit the Ottomans at Moush and Manzikert. He planned to outflank from Beyazit and Iranian Azerbaijan towards Van.[3] However, the Russian advance toward the Caucuses campaign did not last long. The Russian forces suffered reverses. The command of Khalil Bey Eleven divisions of regular troops attacked the very center of the Russian Caucasian advance. In a few days they with Battle of Manzikert July 16, and later Battle of Kara Killisse the Russian army retreated.

In August 1915, as the British occupied Bushire, the gendarmes under Akhgar retreated to Burazjan.

In November 1915, Colonel Pessian as commander of Gendarmerie in Hamedan launched an attack on the pro-Russian Persian Cossack Brigade at the Battle of Musalla. His gendarmes managed to disarm the Persian Cossacks and he managed to win some of the cossacks to join his forces in a patriotic speech he made to them after their defeat. After this victory, Russians advanced on the Persian Gendermerie, in Robat-i-Karim forces under Mohammad-Hossein Jahanbani and in Hamedan-Kermanshah road forces under Colonel Pessian and Azizollah Zarghami (fa) could not defend Hamedan against an advancing Russian Caucasus Army which was superior in numbers and weapons. In Soltanabad, gendarmerie force under Masoud Kayhan (de) were also defeated by the Russians. The gendarmes then retreated to Kermanshah. On November 10, 1915, pro-Central powers Persian Gendarmerie under Ali Quli Khan Pasyan defeat pro-British Khamseh tribal forces of Ibrahim Khan Qavam-ul-Mulk (fa) and capture Shiraz. All British residents of Shiraz are arrested. Gendarmes also capture Yazd and Kerman.

In the middle of November 1915, General Yudenitch who was managing the Caucasian Campaign (the nearest to the spot), dispatched two columns into the Iranian Azerbaijan; one, under General Nikolai Baratov, with the order to push southwestward through Hamadan to Kermanshah, on the way to Bagdad. The second column advanced through Kum and Kashan to Ispahan. A detachment of the Russian Caucasus Army marched on Tehran. On November 14, The Austro-Hungarian and German Ministers left the capital, but Ahmad Shah Qajar did not agree to leave his people behind, and the Prince of Reuss undertook to hold strategical points with a force of 6,000 of the Persian gendarmerie, about 3,000 Turkish irregulars, and the disaffected Persian tribesmen, about 15,000 in all. By the end of the month, Tehran was taken by the Russians Caucuses Army and Armenian volunteers.

In December 1915, the Shah was induced to appoint a new pro-Ally cabinet with Prince Firman Firma at its head. On December 15, 1915, Hamadan was captured by the Nikolai Baratov. Baratov's job was not difficult because, there was no significant resistance. During the last days of 1915, Sir Percy Sykes assigned a mission with a temporary rank of Brigadier-General to establish a force South Persia Rifles using the local Tribesmen which would render their service for a price. His mission was to counter the strong German influence in most of South Persia. 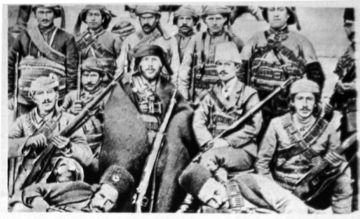 In January 1916, Baratov drove the Turks and Persian tribesman and occupied Hamedan. On February 26, Baratov's forces captured Kermanshah. On March 12, Baratov's forces captured Kharind. Baratov reached the Ottoman frontier, 150 miles from Baghdad in the Mesopotamia campaign, by the middle of May. It was expected that this unit would eventually effect a juncture with the British army in Mesopotamia. In fact, a Cossack company of five officers and 110 men left the Baratov's Russian division on May 8, rode southward a distance of about 180 miles through the territory of disaffected tribesmen, crossing several mountain passes at an altitude of 8,000 feet, and reached the British front on the Tigris on May 18. 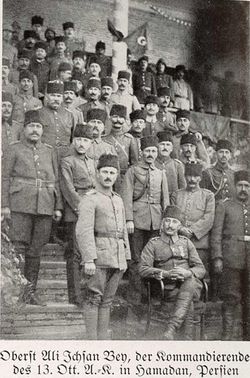 On February 26, 1916, the Russians advanced and defeated the gendarmes who then retreated to Qasr-i-Shirin and managed to hold the region until May 1916, when Qasr-i-Shirin was captured by the Russians. This time, many gendarmes went to live in exile in Istanbul, Mosul and Baghdad. In the spring of 1916, Ibrahim Khan Qavam-ul-Mulk and his Khamseh tribesmen defeated the gendarmes under Ali Quli Khan Pesyan and Ghulam Riza Khan Pesyan who shot and killed each other. Other gendarmes, the German Consul Roever and the Swedish Captain Angman were arrested and tortured.

In early May 1916, due to Enver Pasha's insistence, the Ottomans launched a second invasion of Persia. This was undertaken by the XIII Corps commanding roughly 25,000 troops; the Germans promised to contribute some artillery batteries, but this aid never came. On June 3, the Russians attacked the 6th Infantry Division in an attempt to encircle them at the town of Hankin. However, they were too thinly spread, and their infantry were held in check while their encircling cavalry were crushed. Ottoman casualties were light compared to the Russians: 85 killed, 276 wounded, and 68 missing. This gave the Turks valuable time to strengthen their defenses. On June 8, they crossed the border back into Persia.[6]

In late May, facing Baratov was assigned to the XIII Corps commanded by colonel Ali İhsan Bey, who began his advance. Meanwhile, on the Russian side, Baratov was hoping to capture Khanaqin and move down to Baghdad, which could have been taken by the Russians as the Turks and the British were busy with fighting each other. On June 3, he forced Khanaqin once again, but this time the balance had changed. The Ottoman XIII Corps successful repulsed Baratov's forces, and did not leave it there; soon the counter-offensive that was planned launched. Ali İhsan Bey captured Kermanshah on 2 July and took Hamadan on 10 August. Having lost half of his men, Baratov was forced to retreat north. Baratov stopped at the Sultan Bulak range. In August 1916, the gendarmes return to Kermanshah.

On June 12, 1916, the British advance in southern Persia which was undertaken by Percy Sykes column under reached the Kerman. From this point, he supported the Russians operations against the Ottoman Empire until June 1917, when he was withdrawn with the new Persian government.

In 1916, General Chernozubov sent a Russo-Assyrian military exhibition into Hakkari. The squads within the expedition were led by the Assyrian Patriarch's brother David; Ismail, Malka of the Upper Tyari; and Andreus, the Jilu Malik.

In December 1916, Baratov began to move on Qoms and Hamadan for clearing Persian forces and Ottoman troops. Both cities fell in the same month.[3]

Count Kaunitz disappeared without a trace, either killing himself or being a victim of assassination by disenchanted coup members. The premature coup was crushed in Tehran as Ahmad Shah Qajar took refuge in the Russian legation, and a sizable Russian force arrived to Tehran under Baratov after they landed in Bandar-e Pahlavi in November of that year.[3] The pro-German coup members of the Majles fled to Kirmanshah and Qom without fighting.