مسرح آسيا والهادي في الحرب العالمية الأولى consisted of various naval battles and the Allied conquest of German colonial possessions in the Pacific Ocean and China. The most significant military action was the careful and well-executed Siege of Tsingtao in what is now China, but smaller actions were also fought at Bita Paka and Toma in German New Guinea.

All other German and Austrian possessions in Asia and the Pacific fell without bloodshed. Naval warfare was common; all of the colonial powers had naval squadrons stationed in the Indian or Pacific Oceans. These fleets operated by supporting the invasions of German-held territories and by destroying the East Asia Squadron of the Imperial German Navy. 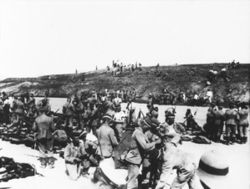 Tsingtao was the most significant German base in the area. It was defended by 3,650 German troops supported by 100 Chinese colonial troops and Austro-Hungarian soldiers and sailors occupying a well-designed fort. Supporting the defenders were a small number of vessels from the Imperial German Navy and the Austro-Hungarian Navy.

The Japanese sent nearly their entire fleet[بحاجة لمصدر] to the area, including six battleships and 23,000 soldiers. The British sent two military units to the battle from their garrison at Tientsin, numbering 1,500, and the Chinese who were unoccupied by the Germans sent over a few thousand troops on the side of the allies.

The bombardment of the fort started on October 31. An assault was made by the Imperial Japanese Army on the night of November 6. The garrison surrendered the next day. Casualties of the battle were 703 on the German side and some 3,600 POW; casualties on the Allied side were 2,066. One Allied protected cruiser was also sunk by a German torpedo boat and when defeat was certain, the Germans and Austro-Hungarians scuttled their squadron. 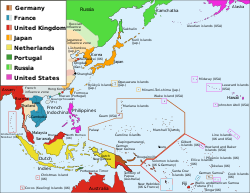 One of the first land offensives in the Pacific theatre was the Occupation of German Samoa in August 29 and 30 1914 by New Zealand forces. The campaign to take Samoa ended without bloodshed after over 1,000 New Zealanders landed on the German colony, supported by an Australian and French naval squadron.

The German government was accused of being behind Zhang Xun's monarchist coup in China to prevent Duan Qirui's pro-war faction from supporting the Allies. After the coup failed in July 1917, Duan used the incident as a pretext for declaring war on Germany.

The German and Austro-Hungarian concessions in Tientsin and Hankow were occupied and their nationals detained. An even more serious plot was Germany's funding of the Constitutional Protection Movement, which geographically split China into two rival governments for eleven years.