تاريخ بلجيكا extends before the founding of the modern state of that name in 1830, and is intertwined with those of its neighbors: the Netherlands, Germany, France and Luxembourg. For most of its history, what is now Belgium was either a part of a larger territory, such as the Carolingian Empire, or divided into a number of smaller states, prominent among them being the Duchy of Brabant, the County of Flanders, the Prince-Bishopric of Liège and County of Luxembourg. Due to its strategic location and its history as a country of contact between different cultures, Belgium has been called the "crossroads of Europe"; for the many armies fighting on its soil, it has also been called the "battlefield of Europe" or the "cockpit of Europe".[بحاجة لمصدر] It is also remarkable as a European nation which contains, and is divided by, a language boundary between Latin-derived French and Germanic Dutch.

Belgium's modern shape can be partly traced back at least as far as the "Seventeen Provinces" within the Burgundian Netherlands. These lands straddled the ancient boundary of the Scheldt that had divided medieval France and Germany, but they were brought together under the House of Valois-Burgundy, and unified into one autonomous territory by their heir Charles V, Holy Roman Emperor, in his Pragmatic Sanction of 1549. The Eighty Years' War (1568–1648) later led to the split between a northern Dutch Republic and the Southern Netherlands from which Belgium and Luxembourg developed. This southern territory continued to be ruled by the Habsburg descendants of the Burgundian house, at first as the "Spanish Netherlands". Invasions from France under Louis XIV led to the loss of what is now Nord-Pas-de-Calais to France, while the remainder finally became the "Austrian Netherlands". The French Revolutionary wars led to Belgium becoming part of France in 1795, bringing the end of the semi-independence of areas which had belonged to the Catholic church. After the defeat of the French in 1814, a new United Kingdom of the Netherlands was created, which eventually split one more time during the Belgian Revolution of 1830–1839, giving three modern nations, Belgium, the Netherlands, and Luxembourg.

The ports and textile industry of Belgium were important back into the Middle Ages, and modern Belgium was one of the first countries to experience an Industrial Revolution, which brought prosperity in the 19th century but also opened a political dichotomy between liberal businessmen and socialist workers. The king set up his own private colonial empire in the Belgian Congo, which the government took over after a major scandal in 1908. Belgium was neutral but its strategic location as a pathway to France made it an invasion target for Germany in 1914 and 1940. Conditions under the occupation were severe. In the postwar period Belgium was a leader in European unification, as a founding member of what has become the European Union. Brussels is now host to the headquarters of NATO and is the de facto capital of the European Union. The colonies became independent in the early 1960s.

Politically the country was once polarized on matters of religion and, in recent decades, it has faced new divisions over differences of language and unequal economic development. This ongoing antagonism has caused far-reaching reforms since the 1970s, changing the formerly unitary Belgian state into a federal state, and repeated governmental crises. It is now divided into three regions: Flanders (Dutch-speaking) in the north, Wallonia (French-speaking) in the south, and bilingual Brussels in the middle. There is also a German-speaking population along the border with Germany that was granted to Prussia in the Congress of Vienna in 1815 but added to Belgium following the 1919 Treaty of Versailles following World War I. German is the third official language of Belgium.

Belgium was a name chosen when the modern country was created, but it has a long history. It is originally a classical name, used by Julius Caesar. The term continued to be used occasionally in different ways until the creation of the modern country. While Caesar described the Belgian part of Gaul as a larger area, much bigger than modern Belgium, including large parts of modern France, Germany and the Netherlands, he only used the term "Belgium" once, referring to a smaller area now mostly in Northern France, where the tribes ruling the Belgian military alliance lived. Under Roman rule this region was the equivalent of the province of Belgica Secunda, which stretched into the coastal Flemish part of modern Belgium.

In late Roman and medieval times the term Belgium tended to be used to refer to Roman Belgica Prima, and its successor Upper Lotharingia, in the Moselle region of Germany, Luxembourg and France. Only slowly in modern times did the old term start to be used for the area to the north of the two Roman Belgica provinces, now the Netherlands and Belgium. For example, it was sometimes used as a classical name for the northern "United Provinces", roughly the predecessor of the modern Netherlands, after they separated from the Spanish-ruled south, roughly the predecessor of modern Belgium, in the early modern era.

Belgium only began to be used exclusively for the southern part of the Netherlands when it was deliberately chosen as the new name for the new country, which broke out of the post-Waterloo kingdom of the Netherlands after a struggle which lasted from 1830 to 1839. 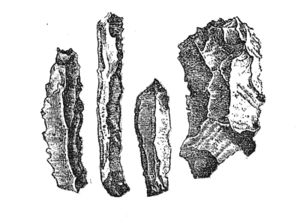 On Belgian territory Neanderthal fossils were discovered at Engis in 1829–30 and elsewhere, some dating back to at least 100,000 BCE.[1]

The earliest Neolithic farming technology of northern Europe, the so-called LBK culture, reached the east of Belgium at its furthest northwesterly stretch from its origins in southeast Europe. Its expansion stopped in the Hesbaye region of eastern Belgium around 5000 BCE. The Belgian LBK is notable for its use of defensive walls around villages, something which may or may not have been necessary because of the proximity of hunter gatherers.[2][3][4]

So-called Limburg pottery and La Hoguette pottery are styles which stretch into northwestern France and the Netherlands, but it has sometimes been argued that these technologies are the result of pottery technology spreading beyond the original LBK farming population of eastern Belgium and northeastern France, and being made by hunter gatherers.[5] A slightly later-starting Neolithic culture found in central Wallonia is the so-called "Groupe de Blicquy", which may represent an offshoot of the LBK settlers. One notable archaeological site in this region is the Neolithic flint mines of Spiennes.[3]

Farming in Belgium however failed to take permanent hold at first. The LBK and Blicquy cultures disappeared and there is a long gap before a new farming culture, the Michelsberg culture, appeared and became widespread. Hunter gatherers of the Swifterbant culture apparently remained in the sandy north of Belgium, but apparently became more and more influenced by farming and pottery technology.[3]

In the third and late fourth millennia BCE, the whole of Flanders shows relatively little evidence of human habitation. Although it is felt that there was a continuing human presence, the types of evidence available make judgement about the details very difficult.[6] The Seine-Oise-Marne culture spread into the Ardennes, and is associated with megalithic sites there (for example Wéris), but did not disperse over all of Belgium. To the north and east, in the Netherlands, a semi-sedentary culture group has been proposed to have existed, the so-called Vlaardingen-Wartburg-Stein complex, which possibly developed from the above-mentioned Swifterbant and Michelsburg cultures.[7] The same pattern continues into the late Neolithic and early Bronze Age. In the last part of the Neolithic, evidence is found for the Corded Ware and Bell Beaker cultures in the south of the Netherlands, but these cultures also do not seem to have had a big impact in all of Belgium.

The population of Belgium started to increase permanently with the late Bronze Age from around 1750 BCE. Three possibly related European cultures arrived in sequence. First the Urnfield culture arrived (for example, tumuli are found at Ravels and Hamont-Achel in the Campine). Then, coming into the Iron Age, the Hallstatt culture, and the La Tène culture. All three of these are associated with Indo-European languages, with specifically Celtic languages being especially associated with La Tène material culture, and possibly Halstatt. This is because historical Greek and Roman records from areas where this culture settled show Celtic placenames and personal names.

However it is possible in Belgium that especially in the northern areas the Hallstatt and La Tène cultures were brought by new elites, and that the main language of the population was not Celtic. From 500 BC Celtic tribes settled in the region and traded with the Mediterranean world. From c. 150 BC, the first coins came into use, under the influence of trade with the Mediterranean. 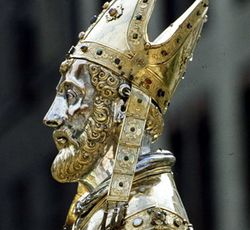 Saint Servatius, bishop of Tongeren and one of the first known Christian figures in the region. 16th century Reliquary 14th century illustration of the Battle of the Golden Spurs in 1302 where forces from the County of Flanders defeated their nominal overlords of the Kingdom of France. 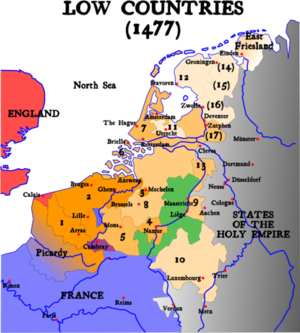 The Seventeen Provinces, and the See of Liège in Green 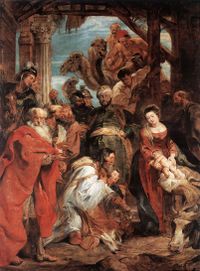 Rubens' Adoration of the Magii

While the United Provinces gained independence, the Southern Netherlands remained under the rule of Spain (1556–1713). 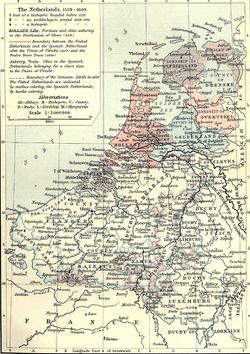 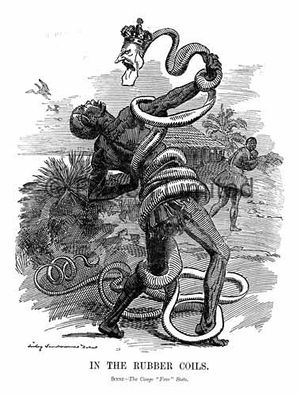 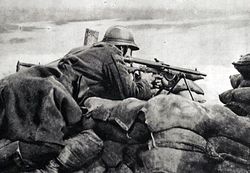 A Belgian machine gunner at the front lines in 1918, firing a Chauchat machine gun. 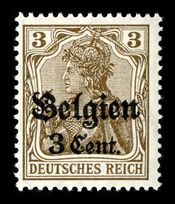 German stamp, overprinted with Belgien (Belgium) for use in the occupied country 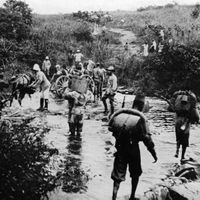 Native soldiers from the Belgian Congo ford a river during the African Campaign, 1916

German presence in Africa posed no direct threat to the Belgian Congo, however, in 1914 a German gunboats sank a number of Belgian vessels on Lake Tanganyika.[9] Congolese soldiers of the Force Publique, under Belgian officers, played an important role in the battles alongside British and French troops in German Togoland, Kamerun and East Africa. 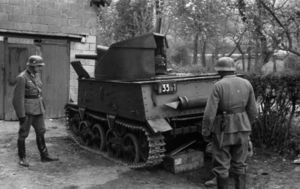 Outbreak and the Phoney War

As the German army invaded Poland on September 1, 1939, the Belgian government announced its neutrality on September 3.

On November 7, King Leopold III made a joint public appeal with the Queen of the Netherlands, calling on all belligerents to accept mediation to terminate the war.[10] 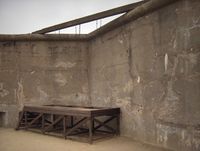 The gallow at Breendonk Concentration Camp, near Mechelen

See also History of Belgium (1939-1945), Military Government and The Holocaust in Belgium

Belgium was run by a Germany military government under General Alexander von Falkenhausen until July 1944, and then under Reichskommissar Josef Grohé until liberation.

Map showing the area of West Germany occupied by Belgian forces after the Second World War, known as FBA-BSD Paul-Henri Spaak, three-times Prime Minister and author of the Spaak Report, was a stauch believer in international bodies, including the ECSC and EEC

Congolese independence and the Congo Crisis

Out of the civil war, Mobutu emerged as the ruler of the re-unified country, which he named Zaire. 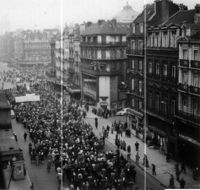 Walloon workers' demonstration in Brussels in the winter of 1960 The flag of Flanders incorporating the Flemish lion, also used by the Flemish Movement.
المقالة الرئيسية: State reform in Belgium 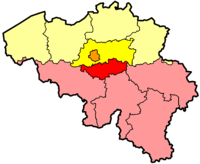 Map showing the division of Brabant into Flemish Brabant (yellow), Walloon Brabant (red) and the Brussels-Capital Region (orange) in 1995