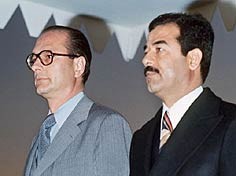 "The first, Jacques Chirac, described the second, Saddam Hussein, as a personal friend, showed him around a French nuclear reactor and invited him to his home for the weekend. It was about this time that the prime minister was nicknamed Jacques Iraq."1[3]

Marshal Philippe P‚tain's collaborationist Vichy government, in alliance with the Nazis, deported between 61,000 and 80,0002 Jews to the extermination camps. Estimates vary. On December 23, 2001, Deputy Foreign Minister Rabbi Michael Melchior expressed his concern over the increasing anti-Semitism in France and in Belgium. He stated that in the past 15 months, there had been almost 200 anti-Semitic incidents in France.3 (Melchior is a recipient of the Nobel Institute's Prize for Tolerance and Bridge-Building.4)

At the end of May 1967, a week before the Six Day War broke out, De Gaulle ordered all French military aid to Israel stopped.2 De Gaulle denounced the Jews "as an elite people, sure of themselves and domineering."5

He sought to boost trade ties with oil-rich Arab nations and extend French influence against the "Anglo-Saxons."6

By 1970, France was one of Iraq's main trading partners.6 Diplomatic and economic ties were given a crucial boost in 1974, when the then French Prime Minister, and current President, Jacques Chirac, called Saddam Hussein a personal friend.6

In December 1974, then Vice President Saddam Hussein invited then French Prime Minister Jacques Chirac to Baghdad. Chirac accepted and visited Iraq in 1975. Chirac is the only Western leader to have a personal knowledge of the Iraqi president.7

Saddam Hussein approved a deal granting French oil companies a number of privileges plus a 23 percent share of Iraqi oil.7

Chirac agreed to sell two reactors to Iraq. The Iraqis purchased a 70-megawatt reactor, along with six charges of 26 points of uranium enriched to 93 percent -- in other words, enough weapons-grade uranium to produce three to four nuclear devices. Iraq also purchased a one-megawatt research reactor, and France agreed to train 600 Iraqi nuclear technicians and scientists -- the core of Iraq’s nuclear capability today.9 One of the reactors, at Al-Toweitheh, 40 km south of Baghdad, was named Al-Tammuz or Osirak (some say this is a contraction of Osiris and Iraq) in reflection of its French predecessor, (Tammuz and Osiris are the names in Babylonian and Egyptian, respectively, for the same god in ancient pantheons.) Al-Tammuz emerged as the core of Iraq's efforts to develop nuclear weapons.7 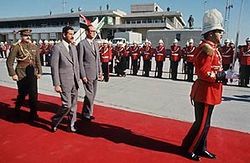 Israel destroyed Al-Tammuz in an air raid. Ilan Ramon, the Israeli astronaut who died in space shuttle Columbia on February 1, 2003, was the youngest among the pilots who destroyed the Tammuz reactor in Iraq in an air raid on June 7, 1981. 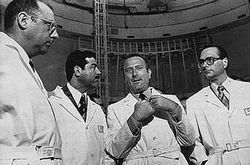 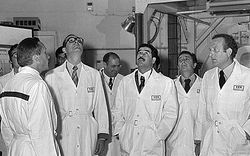 In 1976, Saddam Hussein made his first and only visit to a western capital.7 At Orly Airport, Chirac called Hussein his "personal friend." Hussein agreed to sell France huge quantities of oil.2

The dates of and sequence of transactions in these two reciprocal visits are reported inconsistently. The years 1974, 1975, and 1976 are given, and sometimes the purchase of nuclear reactors is said to have been made in the second visit (by Hussein to France) rather than in the first visit (by Chirac to Iraq). French arms sales and infrastructure projects in Iraq continued apace through the remainder of the 1970s. By the late 1970s, France was second only to the Soviet Union as a supplier of both civilian and military equipment to Iraq.6 In the 1980s, the French socialist government continued the trend.6

France strongly backed Iraq in its war against Iran. Other Western countries also did so. France and Russia provided the bulk of Iraq's war support.6 France supplied Iraq with sophisticated weaponry, including Mirage F1 fighter-bombers, Super Etendard aircraft equipped with Exocet anti-ship missiles,6 and equipment to improve the accuracy and range of Scud missiles.2 The sales are estimated at $20 billion.7 When Iraq had trouble paying, France rescheduled its debt.6 In a 1986 report about Chirac’s attempt to return to the premiership, the New York Times reported that the French official “has said many times that he is a personal friend of Saddam Hussein of Iraq.”9 In 1987, the Manchester Guardian Weekly quoted Chirac as saying that he was “truly fascinated by Saddam Hussein since 1974.”9

Iranians referred to Chirac as “Shah-Iraq” and Israelis spoke of the Osirak reactor as “O-Chirac.”9

When Iraq invaded Kuwait in 1990, France took a lukewarm approach to the Kuwait's liberation.

President Francois Mitterand sent emissaries to 24 countries to assure their governments French participation was purely defensive.2 Just a few days before Operation Desert Storm began in 1991, French envoys in Baghdad tried to find a diplomatic solution.6 Only after the French Embassy in occupied Kuwait was raided and four French citizens kidnapped did Mitterand take a firmer line against Saddam Hussein.2 Economically, French ties with Iraq have been a costly disaster.6 After helping Saddam Hussein build airports, factories and weapons, France is saddled with $4 billion in unpaid bills.6 France helped arm a power that it later had to fight.6 French diplomacy with Iraq has yielded scant results.6 In 1992, author-journalists Claude Angeli and Stéphanie Mesnier interviewed Saddam Hussein. While speaking of his sense of betrayal by France for its participation in the Persian Gulf War, Hussein threatened to expose French politicians for their support of his regime unless they continued to support him. Angeli and Mesnier published the quotation in their book, Notre Allié Saddam (Our Ally Saddam) (O. Orban 1992) ASIN: 2855656583, 274 pages, which is now out of print. They reported Hussein as saying:8 As for financiers, industrialists and above all those responsible for military industry, the question must be put to French politicians: Who did not benefit from these business contracts and relationships with Iraq? . . . With respect to the politicians, one need only refer back to the declarations of all the political parties of France, Right and Left. All were happy to brag about their friendship with Iraq and to refer to common interests. From Mr. Chirac [now the center-right president] to Mr. Chevenement [the socialist former defense minister] . . . politicians and economic leaders were in open competition to spend time with us and flatter us. We have now grasped the reality of the situation [of France's support for the 1991 Gulf War, a betrayal in Saddam's eyes]. If the trickery continues, we will be forced to unmask them, all of them, before the French public.

In 1994, when American troops were rushed to the region after Iraq massed two divisions of Republican Guards near the Kuwaiti border, French Defense Minister Francois Leotard came to Iraq's defense. He said Iraq had not violated any U.N. resolutions, and he accused the United States of playing election-year politics.10 When Chirac became president, he followed his avowed model, General de Gaulle, to promote Gaullist power against U.S. power and support for Arab nations against Israel.2

In 1996 Chirac delivered a speech at Cairo University where he forwarded France as an alternative to the U.S. as Middle East peace broker. Chirac said Arabs would benefit from the change because the U.S. was too pro-Israeli. In 1995, France reopened its embassy in Baghdad at the charg‚ d'affaires level.10 In 1998, when the U.N. arms inspection effort in Iraq was collapsing, the French and Russians worked to head off an American attack. France denounced an American-British operation when it was staged.10

France's best friends in the Middle East are Syria, Iraq and Iran. These are three of seven nations the U.S. lists as state sponsors of international terrorism.11

A 2002 French bestseller says the Pentagon was not hit by American Airlines Flight 77 on September 11, 2001. It says the damage to the Pentagon could not have been caused by a Boeing 757, but was in fact the result of a carefully planned truck bombing or missile strike which was then made to look like a plane crash. It says the United States government staged the entire Pentagon crash in order to create justification for an invasion of Afghanistan.

On April 12, 2002, the Simon Wiesenthal Center released its first ever travel advisory. The advisory covered France and Belgium. Of France the advisory said, "In the last 18 months there have been over 400 hate crimes against Jewish targets in France including, in recent days, arson attacks against synagogues, Jewish institutions, beatings of Jewish school children and pedestrians and other acts of threats and intimidation in Paris, Marseilles, Lyon and other communities. As a result, the Simon Wiesenthal Center urges Jewish travelers to France to exercise extreme caution while traveling to that country." While anti-war personalities claim the U.S. wants war for oil, France may want no war for oil.

In December 1996, the Jerusalem Post quoted Iraq's Oil Minister Amir Rasheed as saying: "'Friendly countries who have supported us, like France and Russia, will certainly be given priority" when the lucrative contracts for the reconstruction of Iraq are awarded after the oil embargo is lifted.2 In December 1996, the London Mail reported that Western intelligence services had learned French companies had signed multi-million dollar contracts to help rearm Iraq, among other things, in exchange for oil.2 At the 35th annual Baghdad international trade fair in November 2002, France was represented by 81 firms. Saddam Hussein gave the French and Germans priority in entering the Iraqi market. Regarding the Germans, this commercial priority was granted as a result of "the firm positive stand of Germany in rejecting the launching of a military attack against Iraq by the U.S," according to Al-Iraq, a government-run newspaper. "The importance of this fair is that it is a clear message that despite the risk of bombing, all these companies and all these countries still believe in peace," said Jihad Feghali, the managing Director of France's Nutris Company. The sanctions committee at the U.N. that reviews contracts between Iraq and international companies is constantly delaying and holding up Feghali contracts for review of dual-usage i.e. military value.12 On February 14, 2003, The Irish Examiner reported that Richard Perle, a former U.S. Assistant Secretary of Defense, said the French anti-war stance was driven by economic interests. French state controlled oil giant. TotalFinaElf has exclusive exploration contracts worth $60 billion to $75 billion to develop the massive Majnoon and Bin Umar oilfields in southern Iraq, he said. Perle said oil experts who had analyzed the deal described it as "extraordinarily lopsided" in favor of the French company.13 CIS Paris, a Parisian broker that is active in dealings of many kinds with Baghdad, brokered a deal among the Chinese producer, the Syrian land transporter and the Iraqi buyer of a chemical that is among the best binders for solid propellant in long range surface-to-surface missiles. The chemical is a transparent liquid rubber called hydroxy-terminated polybutadiene, familiarly known in the advanced-rocket trade as HTPB. This is not for the short-range Al Samoud 2 or old mobile Scuds. The Chinese producer was Qilu Chemicals, 116 DaWu Road in Zibo, Shandong province, China. A shipment of 20 tons of HTPB, the sale of which to Iraq is forbidden by U.N. resolutions and the oil-for-food agreement, left China in August 2002 in a 40-foot container. It arrived in the Syrian port of Tartus (the Mediterranean terminus for an Iraqi oil pipeline today) and was received there by a trading company that was an intermediary for the Iraqi missile industry. The HTPB was then trucked across Syria to Iraq.14 The next day, the French government denied that it had allowed the sales.15 "Despite French denials, U.S. intelligence and defense officials have confirmed that Iraq purchased from China a chemical used in making fuel for long-range missiles, with help from brokers in France and Syria."16 In 2003, beginning in January, a French company sold aircraft and helicopter parts to Iraq for its French-made Mirage F-1 jets and Gazelle attack helicopters.17 This was amidst coalition preparations to militarily disarm Saddam Hussein and debates on U.N. resolutions to authorize that action. United Nations inspectors had previously established that Iraq had modified Mirage F-1 drop tanks for the delivery of biological and chemical weapons by a variety of means. On March 6, 2003, UNMOVIC listed these drop tanks among unresolved disarmament issues.18 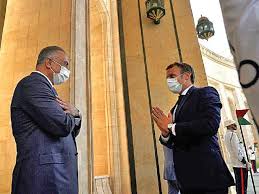