طرابزون ( Trabzon ؛ Ophitic Pontic Greek: Τραπεζούντα (Trapezounta); Georgian: ტრაპიზონი (Trapizoni)؛ بالأرمينية: Տրապիզոնcode: hy is deprecated )، هي عاصمة محافظة طرابزون تقع في شمال شرق تركيا على ساحل البحر الأسود ويبلغ تعداد سكانها حوالي 214,949 نسمة. Trabzon, located on the historical Silk Road, became a melting pot of religions, languages and culture for centuries and a trade gateway to Persia in the southeast and the Caucasus to the northeast.[3] The Venetian and Genoese merchants paid visits to Trabzon during the medieval period and sold silk, linen and woolen fabric. Both republics had merchant colonies within the city – Leonkastron and the former "Venetian castle" – that played a role to Trabzon similar to the one Galata played to Constantinople (modern Istanbul).[4] Trabzon formed the basis of several states in its long history and was the capital city of the Empire of Trebizond between 1204 and 1461. During the early modern period, Trabzon, because of the importance of its port, again became a focal point of trade to Persia and the Caucasus. 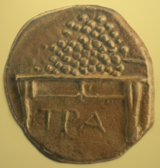 The Turkish name of the city is Trabzon. It is historically known in English as Trebizond. In Latin, Trabzon was called Trapezus, which is the latinization of the Ancient Greek Τραπεζοῦς (Trapezous), the first name of the city. (τράπεζα meant "table" in Ancient Greek; note the table on the coin in the figure.) Both in اليونانية الپنطية واليونانية الحديثة، تـُدعى Τραπεζούντα (Trapezounta). In Ottoman Turkish and Persian, it is written as طربزون. During Ottoman times, Tara Bozan was also used.[5][6][7][8] Some western geographers used this name instead of the Latin Trebizond. In Laz it is known as ტამტრა (T'amt'ra) or T'rap'uzani,[9] in Georgian it is ტრაპიზონი (T'rap'izoni) and in Armenian it is Տրապիզոն Trapizon. The 19th-century Armenian travelling priest Byjiskian called the city by other, native names, including Hurşidabat and Ozinis.[10] Other versions of the name, which have incidentally been used in English literature as well, include: Trebizonde (بالفرنسية)، Trapezunt (Ge.), Trebisonda (Sp.), Trapesunta (It.),Trapisonda, Tribisonde, Terabesoun, Trabesun, Trabuzan, Trabizond و Tarabossan.

Bronze statue of Hermes, 2nd century BCE, found near Tabakhane bridge in the center of Trabzon. On display in the Trabzon Museum. 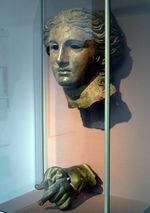 Head and hand of a 2nd century BCE bronze statue of Anahita as Aphrodite, found near Kelkit to the south of Trabzon province. On display in the British Museum.

The oldest area associated with the Kartvelians was northeastern Anatolia, including the العصر الحديدي monarchy of the Diauehi (early-Georgians), later known as the culturally important region of T’ao-Klarjeti, where they pre-dated the Hittites.[11][12][13] 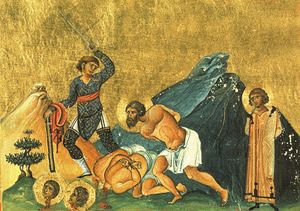 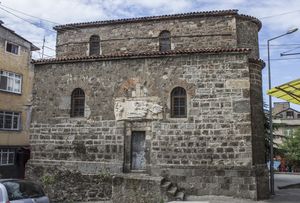 Saint Anne Church to the east of the walled city is the oldest church in the city، التي تعود ربما إلى القرن السادس أو السابع.

إثر هزيمة البيزنطيين في معركة ملاذكرد في 1071، وقعت طرابيزوند تحت حكم السلاجقة. This rule proved transient when an expert soldier and local aristocrat, Theodore Gabras took control of the city from the Turkish invaders, and regarded Trebizond, in the words of Anna Comnena, "as a prize which had fallen to his own lot" and ruled it as his own kingdom.[14] Supporting Comnena's assertion, Simon Bendall has identified a group of rare coins he believes were minted by Gabras and his successors.[15] Although he was killed by the Turks in 1098, other members of his family continued his de facto independent rule into the next century. 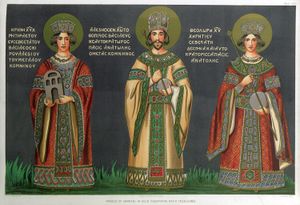 Fresco of Comneni at Agia Theotokos as drawn by Charles Texier. 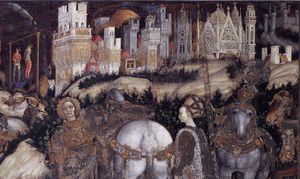 Fantastical depiction of Trebizond by Pisanello in a fresco of the Sant'Anastasia church in Verona, painted between 1436 and 1438.

Fourth Crusade (1202–1204) and the Sack of Constantinople by the Latin Crusaders in April 1204 led to the dissolution of the Byzantine Empire. The Empire of Trebizond was formed in 1204 as one of the three Byzantine Greek successor states of the Byzantine Empire. Located at the far northeastern corner of Anatolia, it was the longest surviving of the Byzantine successor states. Geographically, the Empire of Trebizond consisted of little more than a narrow strip along the southern coast of the Black Sea, and not much further inland than the Pontic Mountains. However, the city gained great wealth from the taxes it levied on the goods traded between Persia and Europe via the Black Sea. The Mongol siege of Baghdad in 1258 diverted more trade caravans towards the city. Genoese and to a lesser extent Venetian traders regularly came to Trabzon. To secure their part of the Black Sea trade, the Genoese bought the coastal fortification "Leonkastron", just west of the winter harbour, in the year 1306.

One of the most famous persons to have visited the city in this period was Marco Polo, who ended his overland return journey at the port of Trebizond, and sailed to his hometown Venice with a ship; passing by Constantinople (Istanbul) on the way, which was retaken by the Byzantines in 1261. A year earlier, in 1260, Niccolò and Maffeo Polo (the father and uncle of Marco Polo) were residing in Constantinople, then the capital of the Latin Empire. They foresaw a political change, liquidated their assets into jewels and moved away.[16] Their decision proved wise, as Constantinople was recaptured in 1261 by Michael VIII Palaiologos, the ruler of the Empire of Nicaea, who promptly burned the Venetian quarter in the city and reestablished the Byzantine Empire. Captured Venetian citizens in Constantinople were blinded,[17] while many of those who managed to escape perished aboard overloaded refugee ships fleeing to other Venetian colonies in the Aegean Sea.

Constantinople remained the Byzantine capital until it was conquered by the Ottoman Sultan Mehmed II in 1453, who also conquered Trebizond eight years later, in 1461.

The Cassone with the 'Conquest of Trebizond' by Apollonio di Giovanni di Tomaso, on display at the Metropolitan Museum of Art in New York. Painted just after the fall of the city, it depicts Trabzon as being equal to Constantinople (at the far left). Even the battle displayed in between the two cities was mostly a fantasy. The city held a legendary place in Western-European literature and thought throughout the late medieval period and the renaissance, with a lasting influence that can be felt even to present times. 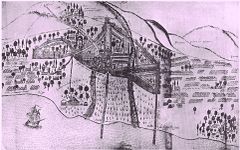 أول مسقط رأسي معروف لطرابزون، رُسِم حوالي 1604-1610 by Julien Bordier. Many characteristics of the city can be recognized: the two streams dividing the central core, the separately walled quarters, the market area between the city and the coast, the suburbs spreading west and east, and Boztepe hill at the top left. 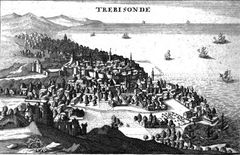 The first city-view of Trabzon, published by Joseph Pitton de Tournefort after a drawing by himself or his assistant Claude Aubriet during a visit in 1701. The view shows the city from Haghia Sophia in the distance all the way to the winter harbour. The drawing was made from Boztepe, which is still the most popular place to view the city. 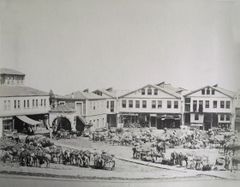 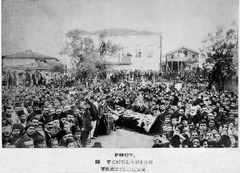 Men and woman gathered for the funeral of an Armenian cleric. Hatchik Tcholakian, 1892. 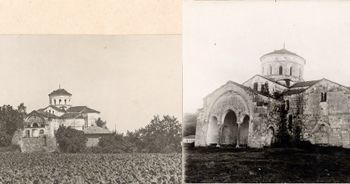 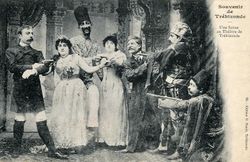 A theater performance in Trabzon c. 1900 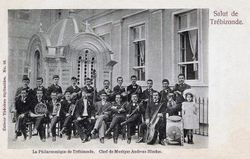 The Philharmonic orchestra of Trabzon 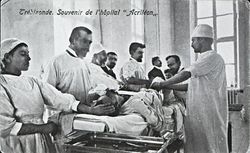 Operation room of the Acriteon Hospital. 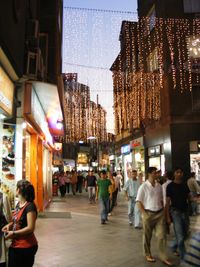 Lithograph of Trabzon from the sea by the Dickinson Brothers of London, 1853. It shows the city from 'Khonsi point' at the left to Platana (Akçaabat) at the right. This is the first impression most western travelers got of the city (in good weather) حتى النصف الثاني من القرن العشرين. 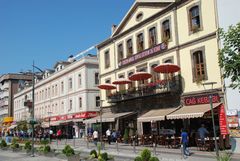 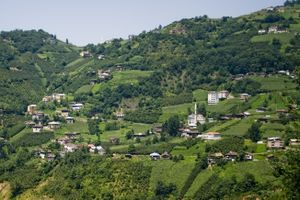 As of 1920, the port at Trabzon, was considered "the most important of the Turkish Black Sea ports", by the British. It traded as far as Tabriz and Mosul. As of 1911, Central Bank of the Republic of Turkey signed an agreement to develop a harbor at the port. When the Russians occupied Trabzon, a mole was built.[24] They built a breakwater and were responsible for creating an extended pier, making loading and unloading easier. In 1920, Trabzon produced linen cloth, silver filagree, tanning and small amounts of cotton, silk and wool. Tobacco and hazelnuts were exported.[25] The tobacco produced in Trabzon was called Trebizond-Platana. It was described as having "large leaves and a bright colour."[26] Trabzon was known for producing poor quality cereals, most which were grown for local use.[27]

Trabzon produced a white green bean, which was sold in Europe. It was, as of 1920, the only vegetable exported out of the province.[26] Poultry farming was also popular in Trabzon. Sericulture was seen in the area before 1914.[28] The area produced copper, silver, zinc, iron and manganese. Copper was kept for local use by coppersmiths. During the Balkan Wars production ceased due to poor exportation and fuel supplies.[29] 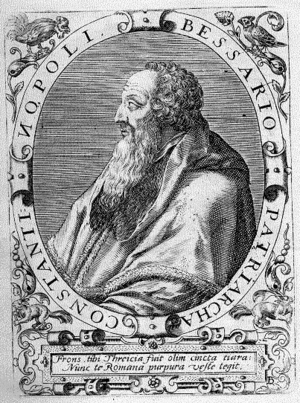 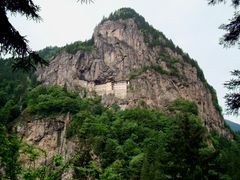 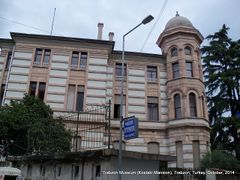 Trabzon has a number of tourist attractions, some of them dating back to the times of the ancient empires that once existed in the region. In the city itself, one can find a hub of shops, stalls and restaurants surrounding the Meydan, a square in the center of the city, which includes a tea garden.

Within Trabzon Province, the main attractions are the Sümela Monastery (i. e. the Monastery of the Panagia Soumelá) and the Uzungöl lake. The monastery is built on the side of a very steep mountain overlooking the green forests below and is about 50 kiloمترs (164,042 قدم) south of the city. Uzungöl is famous for the natural beauty of the area and the amazing scenery. Other important sites of interest in the broader region include: 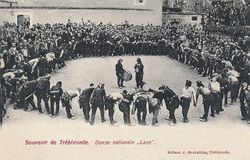 Folk dancing is still very much in evidence in the Black Sea region. The "Horon" is a famous dance which is indigenous to the city and its surrounding area. It is performed by men, women, the young and elderly alike; in festivities, local weddings and harvest times.[31] While similar to Russian Cossack dances in terms of vividness, the Trabzon folk dance is probably indigenous to the eastern Black Sea region, which has an impressive variety of folk music . 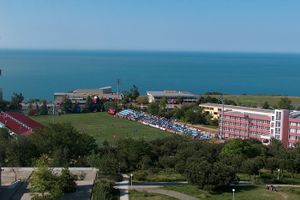 Black Sea Technical University in Trabzon hosts students from all over Turkey, especially from the Black Sea and East Anatolian regions, as well as students from the Turkic states in Central Asia. 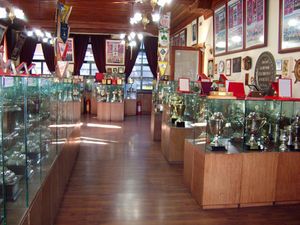 Trabzon hosted the First Edition of the Black Sea Games in July 2007 and the 2011 European Youth Summer Olympic Festival.