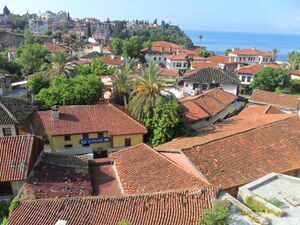 Antalya is the capital of the province.

Antalya is the fastest-growing province in Turkey; with a 4.17% yearly population growth rate between years 1990–2000, compared with the national rate of 1.83%. This growth is due to a fast rate of urbanization, particularly driven by tourism and other service sectors on the coast.

The city and thus the province are named after Attalos II, king of Pergamon, who founded the city in the 2nd century BC. 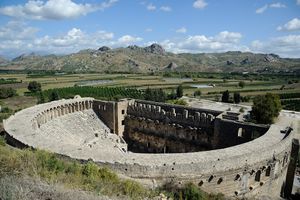 Antalya has been settled since pre-historic times. Evidence of human habitation dating back to the early Paleolithic age (150,000-200,000) years has been discovered in the Karain cave, 30 kم (98,425 قدم) of the north of Antalya city.[1] Other finds dating back to the Mesolithic (Beldibi Cave), Neolithic (Bademağacı Höyüğü) and more recent periods show that the area has been populated by various civilizations throughout the ages.

According to Herodotus, the earliest known inhabitants were a Bronze Age people called the Milyae (Milyans), who referred to the area as Milyas and spoke an Indo-European language known as Milyan. A people called the Termilae, from Crete, also settled and eventually dominated the coastal margins, which were known as Trm̃mis (while the Milyae became concentrated in the mountains). According to Greek legend, an exiled Athenian called Lykos (Latin: Lycus) became prominent in the region. Records from the Hittite period refer to the inhabitas and the area as Lukka, and document lively interactions with neighboring regions in the 2nd millennium BC. It is commonly accepted that Lukka is cognate with the later, latinised exonym Lycia. The Lukka were known for their seafaring skills (including piracy) and demonstrated a fiery, independent spirit; neither the Hittites, nor the Arzawa, to the west, could ever dominate them for long.

According to Greek legend, there was immigration by a Greek tribe called the Akhaioi (from the northern Peloponnese) to the area, after the Trojan War, and eventually many Greek settlements built up along the coast and inland. In the Hellenistic period, the western parts of the later Antalya were regarded as Lycia, whereas the east was Pamphylia, and the extremes east Cilicia, while Pisidia was to the north. These communities grew into independent cities, and a eventually a federation was set up, under the name of Pamphylia. 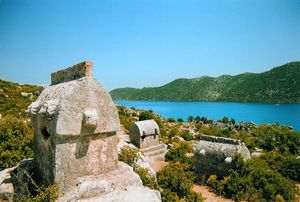 Before the Ancient Roman conquest Lycia was a polity with the first democratic constitution in the world, which later partly inspired the U.S. Constitution.[2]

Antalya was part of the Lydian kingdom from the 7th century BC until Lydia was defeated by the Achaemenid Empire during the Battle of Sardis in 546 BC. The Macedonian commander Alexander the Great ended Persian rule and in around 334 BC conquered the cities of the area one by one—except for Termessos and Sillyon which managed to repulse his armies in 333 BC. After the death of Alexander in 323 BC, a long battle erupted between his generals that lasted until 188 BC.

The reign of the kingdom of Pergamon began with the defeat of the Seleucid army at Apamea. Shortly after this the city of Antalya was founded. When Attalos III, the last king of Pergamom, died in 133 BC he left his kingdom to the Roman Republic. At this time the area is dominated by pirates based in small cities along the coast. 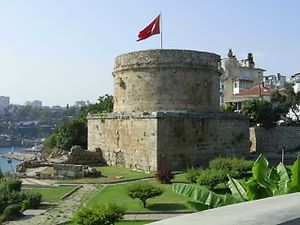 During the mid-Byzantine era (the 5th and 6th centuries) the city of Antalya grew beyond the city walls.

From the early Muslim conquests of the 7th century Muslim Arabs started to be dominant in the Levant region and Antalya later played a part in the Christian Crusades against Islam. The army of King Louis VII of France sailed from Antalya for Syria during the Second Crusade in 1148, and the fleet of Richard I of England rallied here before the conquest of Cyprus during the Third Crusade. In the late 11th and early 12th Century much of the area of the modern province fell to the Turks especially the Danishmends. From 1120 to March 1207, Antalya was again under the sovereignty of Byzantines.[3]

The area was conquered by the Seljuk Turks and recaptured by the Byzantines again and again from 1076 onwards as the Seljuks strove to establish a trading base on the Mediterranean. At one stage Turkish lord Kilij Arslan had a palace here. In 1220 Byzantine rule ended for the last time and the city was quickly divided into Christian and Muslim sections, the Christian trading communities including Venetians and Genoese. Alanya also grew and throve during the Seljuk period. 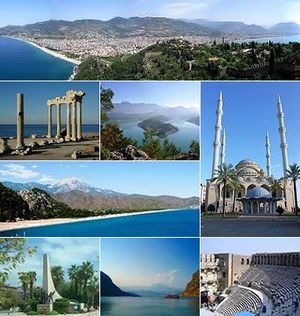 The area passed through many hands before its final occupation by the Ottoman Empire under Murad II during the Ottoman expansion into Europe in 1432. Antalya also was occupied by Kingdom of Cyprus between 1361 and 1373. Ottoman rule of the coast persisted until the empire's collapse at the end of the First World War. The Kingdom of Italy was guaranteed the province in the Agreement of Saint-Jean-de-Maurienne, although the other members of the Allied Powers disputed the legality of this treaty. Antalya was briefly occupied by the Royal Italian Army before becoming part of the Republic of Turkey during the Turkish War of Independence in 1921.[4]

There are many archaeological sites in the province including three National Parks and three Specially Protected Areas.

Antalya province is situated in south-west Anatolia, between the longitudes 29°20'-32°35'East and latitudes 36°07'-37°29'North. The province covers an area of 20,591 square miles. The southern border of the province is the Mediterranean Sea while the Taurus mountains draw the land border. From west to east the province is bordered by Muğla, Burdur, Isparta, Konya, Karaman and Mersin provinces. The land of the province is 77.8% mountainous, 10.2% plain and 12% uneven. Many of the peaks of the Taurus mountains are above 500–3000 metres. The Teke Peninsula (corresponds to ancient Lycia) in the west includes wide plateaus and river basins. Climate, agriculture, demographics and habitation patterns differ greatly between the inland mountain areas and the coastal plain.

The population of Antalya province is estimated 2,426,356 in 2018. Antalya is the fifth province of Turkey with high foreigner resident population which is 6,343.[5] 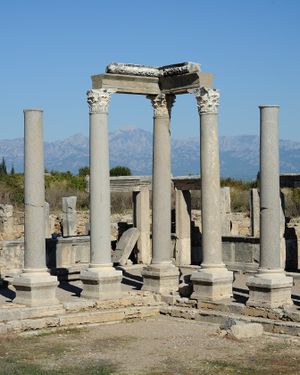 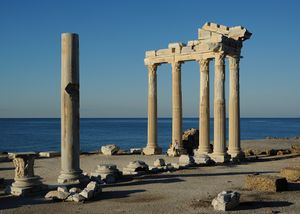 The highest point of the Taurus mountains is Akdağ at an altitude of 3025 metres. Located to the northwest of the city centre and at a distance of 50 kم (164,042 قدم) is the Saklıkent ski and recreation centre on Beydağları. Here one can ski and then go down to the shore and into the sea during the months of January–April. In Saklıkent there are two teleski and ski courses along with villas and accommodation facilities available in the area. Situated on Bakırlı Hill behind Saklıkent is the Antalya National Space Observatory. It is possible to watch meteor showers and shooting stars on certain days of the year. In rivers rafting and canoeing sports and on the Taurus mountains jeep safari, hunting and trekking tours are organised. Alternatively, there is rock-climbing, bird watching tourism, photo-safari, mountain tourism, line fishing and health tourism at the thalasso and dialysis centres in Geyikbayırı. Holy tourism activities are organized in Myra and Patara where St Nicholas was born and lived. The eternal flames of Chimaera that was the inspiration for the Chimera myth is also located in Antalya. In the area of Belek, 30 kم (98,425 قدم). east of Antalya, there is a big potential for golf tourism with the bonus of the cultural, historical and natural sightseeing of the region. There are five golf facilities already operating in Belek. There are underwater diving centres on the coast, primarily in Kemer, Çamyuva, Olympos, Adrasan, Kaş, Kalkan, Üçağız, Kekova, Side and Alanya. In addition, yacht tours are organized from the port of Antalya to Düden Waterfall-Karpuzkaldıran and Kemer, from Side to Alanya, from Demre-Çayağzı to Kekova, from Kaş to Kekova, from Kemer to Çıralı-Olympos-Adrasan and Cape Gelidonya. There are also boat tours on Manavgat creek and canoe tours on Xanthos creek. In addition, Blue Cruise, which covers the southwestern Anatolian coast, ends in Antalya. There are ferryboat trips from Alanya to Cyprus and from Antalya to Italy. Antalya today is a tourism centre with touristic accommodation facilities, nature and historic sites.[بحاجة لمصدر]