Anatolias highest mountain, Mount Ararat (Ağrı Dağı) is at present in Turkey's Iğdır province, but much of the land is a wide plain far below the mountain. The climate is the warmest in this part of Turkey; cotton can be grown in Iğdır. The closed border with Armenia follows the Aras River.

عاصمة المحافظة هي مدينة إغدير. The majority of the province's population is Kurdish, with Azerbaijanis making up the remainder.[5]

Archaeological research has uncovered Hurrian settlements in the Iğdır region going back to 4000 BC. The area was part of the Urartu kingdom circa 800 BC. There is a Urartu statuary in the area. It remained under Urartian control until its transition to the Median Empire, Persian Empire, Alexander The Great, Orontid Dynasty of the Kingdom of Armenia. Seleucid, Parthian, Roman, Sassanid and Byzantine forces were prominent from the 4th century BC, followed by the Arab armies of Islam in 646. Turks, Georgians and Mongols fought through here for 400 years from 1064 onwards until the area was settled by Kara Koyunlu and then Ak Koyunlu Turkic tribes in the early 15th century.

For centuries, constant warfare ensued between the two arch rivals, the Ottoman Empire and the Persian Empire from 1534 until 1746. The region, most of the time remaining in Persian hands, was officially ceded once again in 1746, when subsequently most of its land within the province of Iğdır today became part of the Erivan khanate, a Muslim principality in Persia. The northern part of the province remained in Persian hands until after the Russo-Persian War, 1826–1828 when it became part of the Russian Empire under the Treaty of Turkmenchay. Under Russian administration, the area became the Surmali uyezd (with its capital at the city of Iğdır) of the Armenian Oblast and later the Erivan Governorate. The southern half of the province remained in Ottoman hands through most of the 19th century but was incorporated into the Russian Empire as a result of the Russo-Turkish War of 1877–78.

Towards the end of World War I, the whole area came under the administration of the First Republic of Armenia as part of Ararat province. After an attack into the territory by the Turkish army, Iğdır was ceded to Turkey by the Soviet government under the Treaty of Kars. A substantial Armenian population remained in the area throughout this history of struggle between great powers. Armenians formed the ethnic majority in the city of Iğdır itself until 1919–1920 when most either died or fled due to starvation during the Turkish–Armenian War. It was part of the former Province of Beyazıt between 1922 and 1927, part of Ağrı Province between 1927 and 1934, and finally part of Kars Province between 1934 and 1993, before becoming a separate province.[6] 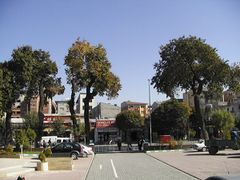