listen); older بالإنگليزية: Ratisbon /ˈrætɪsbɒn/;[3] باڤارية: Rengschburgcode: bar is deprecated or Rengschburch) is a city in south-east Germany, at the confluence of the Danube, Naab and Regen rivers. With more than 150,000 inhabitants, Regensburg is the fourth-largest city in the State of Bavaria after Munich, Nuremberg and Augsburg. The city is the political, economic and cultural centre and capital of the Upper Palatinate.

The medieval centre of the city is a UNESCO World Heritage Site. In 2014, Regensburg was among the top sights and travel attractions in Germany.[4] 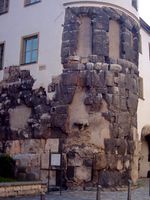 The first settlements in Regensburg date from the Stone Age. The Celtic name Radasbona was the oldest given to a settlement near the present city. Around AD 90, the Romans built a fort there. 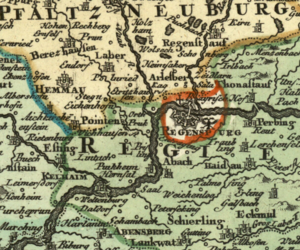 Territory of Regensburg on an 18th-century map 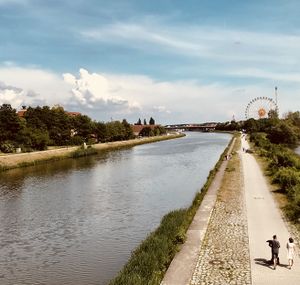 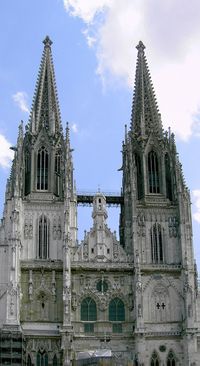 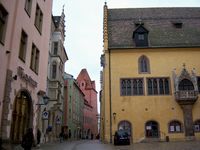 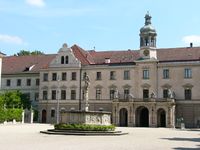 In May 2017, Regensburg had 164,896 inhabitants,[7] making it the fourth largest city in Bavaria. Over the last hundred years, the city has experienced a strong increase in population, surpassing 100,000 inhabitants in 1945 due to Germans who were ethnically cleansed from eastern parts of the Third Reich, especially from the Sudetenland. Today, Regensburg is one of the fastest-growing cities in Germany. 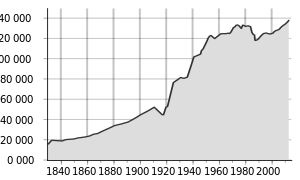 Nearly 12% of the total population are foreign residents. Most of them come from Turkey and Central and Eastern Europe:[8]

The Lord Mayor and the City Council are elected for a period of six years. Both elections take place at the same time. The City Council is composed of 51 members and includes the Lord Mayor, two deputy mayors, five counsellors and the other council members.

The municipal elections in Bavaria of 2014 delivered the following results:

After 18 years of a City Council with conservative majority, the social-democratic candidate, Joachim Wolbergs, became Lord Mayor of Regensburg in May 2014. He was succeeded by Gertrud Maltz-Schwarzfischer in May 2020, who is also a social-democratic politician.

Regensburg is twinned with:

Regensburg's economy counts among the most dynamic and fastest growing in Germany.[12] Focus is on manufacturing industries, such as automotive, industrial and electrical engineering. 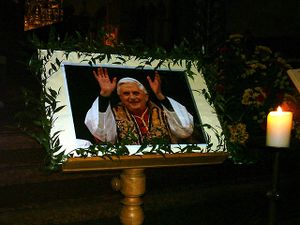 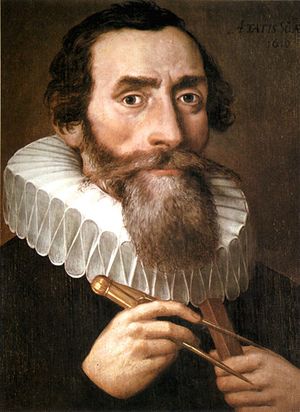