Kampala was named the 13th fastest growing city on the planet, with an annual population growth rate of 4.03 percent,[6] by City Mayors. Kampala has been ranked the best city to live in East Africa[7] ahead of Nairobi and Kigali by Mercer, a global development consulting agency based in New York City.

The name Kampala originally referred to only the present-day Old Kampala hill on whose summit was located the former Fort Lugard and the headquarters of the British Colonialist in the soon to be Uganda Protectorate. Prior to the British occupation and construction of Fort Lugard, this hill was a hunting reserve of the Kabaka of Buganda and had several species of antelope, particularly the impala. When the British arrived, they called this place " The Hill of the Impala". Later on, the Baganda in whose territory this British Settlement was located, translated "Hill of the Impala" as Akasozi ke'Empala – "Kasozi" meaning "hill", "ke" meaning "of", and "empala" the plural of "impala". In Luganda, the words "ka'mpala" mean "that it is of the impala", in reference to a hill, and the single word "Kampala" came to refer to the British colonial Settlement that later developed out of the occupied Old Kampala hill near the pre-existing Kibuga (capital) of Buganda Kingdom.''.[8]

This area of numerous hills that later become known as Kampala was the core of the highly centralized Buganda Kingdom and site of the location of shifting Kibuga(capitals) and of its different Bassekabaka(Kings). Each Kabaka(king) would set up his Kibuga(capital)on a new and different hill in this area, the first written description of this Kibuga was by the explorer Richard Francis Burton in his book The Lake Region of East Africa published in 1860.

In the book, Burton relying on the information collected by Snay Bin Amir, an Arab trader, described the Kibuga as “…the settlement is not less than a day’s journey in length, the buildings are of cane and rattan. The sultan (Kabaka)’s palace is at least a mile long and the circular huts neatly arranged in a line are surrounded by a strong fence which has only four gates.

in 1862 when explorer John Speke arrived in the Buganda Kingdom Mutesa I of Buganda was king and his Kibuga(Capital) was at Bandabarogo present-day Banda hill. Later on, in 1875 explorer Henry Morton Stanley reported the capital as being at present-day Lubaga hill were he met the same Kabaka Mutesa I. And during this visit, Henry Stanley Morton wrote a letter that was published in the Daily Telegraphy inviting missionaries to come to Buganda.

In 1877 the first lot of missionaries of Church Mission Society who were of the protestant faith, arrived from the United Kingdom to Buganda and were given Namirembe hill and two years later in 1879 the catholic White Fathers missionaries also arrived in Buganda and were also given another hill Lubaga hill. The arrival of these two missionaries groups laid the ground for the Religious wars of 1888 to 1892 between their new converts and forcing the missionaries from Britain to then lobby for the British government to take over Buganda/Uganda as a protectorate.

In 1890 Frederick Lugard, an agent of the Imperial British East Africa Company, arrived in Buganda during the reign of Ssekabaka Mwanga II with whom he signed a treaty of protection by the British government over Buganda and whose Kibuga(Capital) was at Mengo hill. Captain Lugard would, later on, be allocated the hill that would soon be known as Old Kampala were he built a fort.

In 1895, Mengo Senior School the first school offering Western Education in Kampala was opened by the Church Missionary Society at Namirembe hill were mostly children of chiefs and pages of the Royal palaces were the students.

In 1897 Ssekabaka Mwanga would rebel and wage a war against British rule and was subsequently captured and deported in 1899 to Seychelles alongside Omukama Kabalega and Mwanga's son who was 3 years old at the time was made the King by the combined forces of the British officers, Nubian soldiers and Baganda collaborators and culminating in the signing of the Buganda Agreement (1900) that formalized British colonial rule in Buganda.

In 1897, Kampala's first Western-style health facility Mengo Hospital was opened on Namirembe hill by British Doctor and missionary Sir Albert Ruskin Cook would also, later on, founded Mulago Hospital the current National Referral Hospital in 1913 at Mulago hill. In 1899, Missionary Sisters of Our Lady of Africa would open Lubaga Hospital at Lubaga hill.

This agreement by Sir Harry Johnston created new land tenures such as Freehold, Crownland, Mailo and divided up and allocated the land in such a way would that would come to define the development of Kampala.

The Land in Buganda's capital (Kibuga) included Mengo hill,Makerere hill, etc was allocated to the young king of Buganda, the Baganda colonial collaborators, etc under mailo and freehold.

The Religious Missions were also formally allocated land they were previously occupying including Catholic White Fathers who got Lubaga hill, the Protestant Church Missionary Society got Namirembe hill, the Muslims under Prince Nuhu Mbogo's leadership received Kibuli hill and the Catholic Saint Joseph's Missionary Society of Mill Hill from Britain received most of Nsambya hill. and finally, the Uganda colonial/Protectorate government got land classified as crownland in the area such as Old Kampala hill, Nakasero Hill, etc this would be formalized by the Uganda Crownland Ordinance of 1903.

In 1906, the Crownland consisting of Old Kampala and Nakasero hills and covering 567 Hectares(5.67sqkm) was consolidated and gazetted as Kampala Township and by 1912 when Kampala Township first got its first land-use plan the Township had a population of 2,850 people who were mostly European and Asians.[9]

In 1922,Makerere University Kampala's oldest University was founded as the Uganda Technical College at the present Makerere hill and offered carpentry, building construction and mechanics, arts, education, agriculture, and medicine.

In 1930 another planning scheme (land use plan) was introduced to regulate developments within the township. The 1930 land-use plan for Kampala segregated residential, industrial and commercial areas as well as a planned civic center.[9]

In 1930 the first sewerage plan was prepared targeting a population of 20,000 people in Nakasero and Old Kampala areas of the Kampala township. This plan guided sewerage development from 1936–1940 in planned urban areas of the Kampala Township and excluded the Kibuga area occupied by the Baganda and other natives.[10]

In 1931, the Uganda Railway line reached Kampala connecting Kampala to Mombasa Port thirty-five years from the commencement of its construction.[11]

In 1938, The East African Power & Lighting Company was granted a license for thermal electric power generation and distribution for towns of Kampala and Entebbe and in the same year Governor Sir Philip Mitchel switched on Kampala and Uganda's first electric street lights.[12],[13]

In 1945, Ernst May a German Architect was commissioned by Uganda Protectorate Government to design a new physical plan for Kampala. Ernst May's plan 0f 1947 was intended to extend Kampala eastwards covering Kololo hill, Naguru hill and with commercial center on the southern slopes of Nakasero hill, an industrial zone in the southeast of Kampala and for the first time a planned residential zone for the Ugandan natives.[14] The plan was never fully implemented and 1951 the third physical plan by Henry Kendall was instead adopted though it incorporated some elements of Ernst May's 1947 plan.[14] 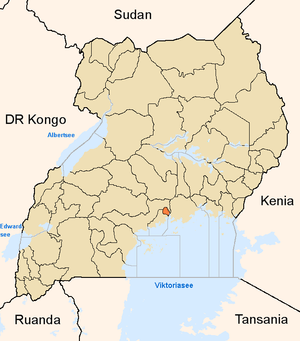 Henry Kendall's 1951 plan expanded Kampala from the 5.67sqkm area of 1930 plan to an area of 28sqkm incorporating areas like Kololo hill, Industrial Area, etc. However, like the first two planning schemes, the 1951 plan failed to achieve many of its stated objectives[9]

On 9th October of 1962, Uganda gained independence subsequently the capital city was transferred from Entebbe to Kampala and in the same year, Kampala was granted City status.

In 1968, five years after Uganda attaining Independence the Boundaries of Kampala were expanded incorporating the Kibuga(now known as Mengo Municipality), Kawempe and Nakawa Townships, areas of Muyenga, Ggaba, etc.[15] This increased administrative area of Kampala from 28sqkm to the current 189sqkm.

In 1972, the fourth physical plan for Kampala was made covering the newly incorporated areas of Kampala's boundary extensions of 1968 but the subsequent political and economic turmoil of the 1970s and 1980s meant the plan was never implemented.[15],[16] Similarly, the fifth physical plan for Kampala made in 1994, like 1972 plan was never also implemented.

In 2010 Kampala Capital City Authority act was enacted giving the government more control of the administration Kampala city and the act also created the Kampala Metropolitan Physical Planning Authority with aims of improving the infrastructure of the Kampala proper and the surrounding areas of Wakiso district, Mukono Town, and parts of Mpigi and Luwero districts.[17]

Kampala has a tropical rainforest climate (Af) under the Köppen-Geiger climate classification system.[18]

A facet of Kampala's weather is that it features two annual wetter seasons. While the city does not have a true dry season month, it experiences heavier precipitation from August to December and from February to June. However, it's between February and June that Kampala sees substantially heavier rainfall per month, with April typically seeing the heaviest amount of precipitation at an average of around 169 milliمترs (6.7 بوصة) of rain. Kampala has been frequently described as the lightning-strike capital of the world. 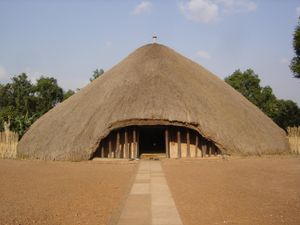 Kampala was originally built on seven hills, but it has expanded to cover more than the original seven hills. 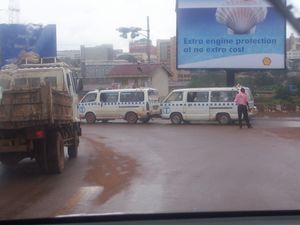