Tianwen-1 (TW-1; الصينية المبسطة: 天问؛ الصينية التقليدية: 天問؛ حرفياً: Heavenly Questions�) is an interplanetary mission by the China National Space Administration (CNSA) to send a robotic spacecraft to Mars, consisting of an orbiter, deployable camera, lander and the Zhurong rover.[11] The spacecraft, with a total mass of nearly five tons, is one of the heaviest probes launched to Mars and carries 13 scientific instruments.

The scientific objectives of the mission relate to the geology of Mars, the current and past presence of water, the internal structure of the planet, identification of minerals and rock types on the surface, as well as characterization of the space environment and atmosphere of Mars.

The mission was launched from the Wenchang Spacecraft Launch Site on 23 July 2020[12] on a Long March 5 heavy-lift launch vehicle. After seven months of transit, it entered orbit around Mars on 10 February 2021.[13][4] For the next three months the space probe studied the target landing sites from a reconnaissance orbit. On 14 May 2021, the lander successfully landed on Mars.[11] With the landing, China became the third nation to achieve a successful soft landing on Mars, after the Soviet Union and the United States.[14] If the deployment of the rover is also successful, China would become only the second nation to accomplish this feat, after the United States,[1][15] and the first nation to orbit, land and release a rover during its first mission to arrive at Mars.[16]

The Tianwen-1 mission was the second of three Martian exploration missions launched during the July 2020 window, with missions also launched by the national space agencies of the United Arab Emirates (Emirates Mars Mission with the Hope orbiter) and the United States (Mars 2020 with the Perseverance rover and Ingenuity helicopter drone).

On 24 April 2021, in anticipation of the upcoming landing attempt, CNSA formally announced that the rover is to be named Zhurong, after a Chinese mytho-historical figure usually associated with fire and light.[20] The name was selected by a public online vote held between 20 January 2021 and 28 February 2021, with Zhurong ranking first with 504,466 votes.[21] Some Chinese commentators suggest that the naming of the Tianwen-1 Mars rover after Zhurong is meant to "ignite the fire of interstellar exploration in China and to symbolize the Chinese people's determination to explore the stars and to uncover unknowns in the universe".[22] 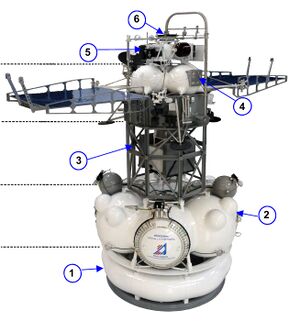 Model of Fobos-Grunt presented at the Paris Air Show in 2011. The Chinese satellite Yinghuo-1 is in the center, marked with the label 3.

China's Mars program started in partnership with Russia. In November 2011, the Russian spacecraft Fobos-Grunt, destined for Mars and Phobos, was launched from Baikonur Cosmodrome. The Russian spacecraft carried with it an attached secondary spacecraft, the Yinghuo-1, which was intended to become China's first Mars orbiter (Fobos-Grunt also carried experiments from The Planetary Society and Bulgaria). However, Fobos-Grunt's main propulsion unit failed to boost the Mars-bound stack from its initial Earth parking orbit and the combined multinational spacecraft and experiments eventually reentered in the atmosphere of Earth in January 2012.[23] China subsequently began an independent Mars project.[24] 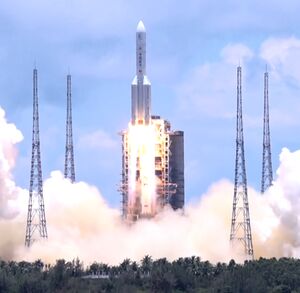 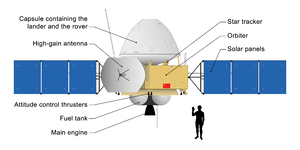 A schematic of the Tianwen-1 spacecraft stack

The new Chinese Mars spacecraft, consisting of an orbiter and a lander with an attached rover, is developed by the China Aerospace Science and Technology Corporation (CASC) and managed by the National Space Science Centre (NSSC) in Beijing.[25] The mission was formally approved by Chinese authorities in 2016, and became a reality five years later.[26] It was launched from Wenchang Spacecraft Launch Site on the Chinese island of Hainan atop a Long March 5 heavy-lift launch vehicle on 23 July 2020.[12]

The orbiter also completed two mid-course orbital corrections and performed self diagnostics on multiple payloads.[28] The spacecraft has begun to conduct scientific operations with the Mars Energetic Particle Analyzer, mounted on the orbiter, which has already transmitted data back to ground control.[29]

After the lander touches down on Mars, the Zhurong will be released. This rover will be powered by solar panels and is expected to probe the Martian surface with radar and to perform chemical analyses on the soil; it would also look for biomolecules and biosignatures.[1]

This is China's first interplanetary mission, as well as its first independent probe to Mars. The goal is therefore first of all to validate the communication and control technologies in deep space, the placing in orbit around the planet and the landing on its surface. The orbiter must also make it possible to locate a site for a future return of Martian samples.

From a scientific point of view, the mission must meet five objectives:

The aims of the mission include searching for evidence of current and past life, producing surface maps, characterizing soil composition and water ice distribution, and examining the Martian atmosphere, and in particular its ionosphere.[31] 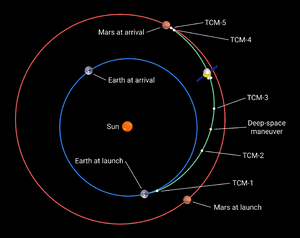 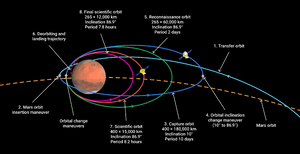 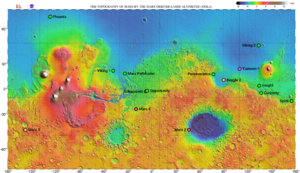 Map of Mars with the targeted landing site of the Tianwen-1 lander and Zhurong, and the locations of previous Mars landings

In late 2019, the Xi'an Aerospace Propulsion Institute, a subsidiary of China Aerospace Science and Technology Corporation (CASC), stated that the performance and control of the future spacecraft's propulsion system has been verified and had passed all requisite pre-flight tests, including tests for hovering, hazard avoidance, deceleration and landing. The main component of the lander's propulsion system consists of a single engine that provides 7,500 ن (1,700 رطلق) of thrust. The spacecraft's supersonic parachute system had also been successfully tested.[26]

CNSA initially focused on the Chryse Planitia and Elysium Mons regions of Mars in its search for possible landing sites. However, in September 2019 during a joint meeting in Geneva, in Switzerland, of the European Planetary Science Congress-Division for Planetary Sciences, Chinese presenters announced that two preliminary sites in the Utopia Planitia region of Mars have instead been chosen for the anticipated landing attempt, with each site having a landing ellipse of approximately 100 by 40 kilometres.[26]

In July 2020, CNSA provided landing coordinates of 110.318° East longitude and 24.748° North latitude, within the southern portion of Utopia Planitia, as the specific primary landing site. The area appears to provide a relatively safe place for a landing attempt but is also of great scientific interest, according to Alfred McEwen, director of the Planetary Image Research Laboratory at the University of Arizona.[8] Simulated landings have been performed as part of mission preparations by the Beijing Institute of Space Mechanics and Electricity.[34]

By 23 January 2020, the Long March 5 Y4 rocket's hydrogen-oxygen engine had completed a 100-seconds test, which was the last engine test prior to the final assembly of the launch vehicle. It successfully launched on 23 July 2020.[12]

The three Tianwen-1 spacecraft were launched by Long March 5 Heavy-lift launch vehicle on 23 July 2020. Having traveled for about seven months, it entered Mars orbit on 10 February 2021 by performing a burn of its engines to slow it down just enough to be captured by Mars' gravitational pull. The orbiter spent several months scanning the surface to refine the target landing zone for the lander/rover.[35][36][19] It approached at about 265 kم (869,000 قدم) to Mars' surface, allowing a high-resolution camera to return images to the Earth and to map the landing site in Utopia Planitia.[37][معلومات قديمة]

At 23:18 UTC, on 14 May 2021, the Tianwen-1 lander successfully landed in the preselected landing area in the southern part of the Mars Utopia Planitia.[5][38][39][40][41] The landing phase began with the release of the protective capsule containing the lander/rover. The capsule made an atmospheric entry followed by a descent phase under parachute, after which the lander used retro-propulsion to soft-land on Mars.[6][7][39]

Current plans call for the lander to deploy the rover Zhurong on 22 May 2021.[42] The rover is designed to explore the surface for 90 sols; its height is about 1.85 م (6.1 قدم) and it has a mass of about 240 kغ (530 رطل). After the planned rover deployment, the orbiter would serve as a telecommunications relay for the rover while continuing to conduct its own orbital observations of Mars.[22]

Chinese President Xi Jinping stated in response to the landing, "You were brave enough for the challenge, pursued excellence and placed our country in the advanced ranks of planetary exploration. Your outstanding achievement will forever be etched in the memories of the motherland and the people."[43] 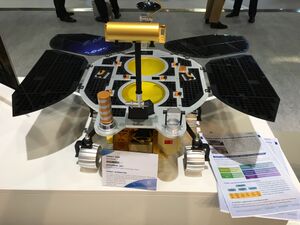 Mockup of the Zhurong rover at the 69th International Astronautical Congress 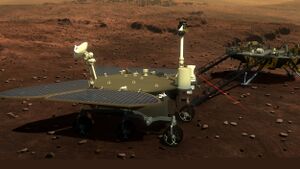 Artist's impression of the Zhurong rover surveying the surface of Mars

To achieve the scientific objectives of the mission, the Tianwen-1 orbiter and Zhurong are equipped with 13 instruments:[44]

Argentina's Comisión Nacional de Actividades Espaciales (CONAE) is collaborating on Tianwen-1 by way of a Chinese-run tracking station installed in Las Lajas, Neuquén. The facility played a previous role in China's landing of the Chang'e-4 spacecraft on the far side of the Moon in January 2019.[46]

France's Institute for Research in Astrophysics and Planetology (IRAP) in Toulouse, in France, is collaborating on the Zhurong rover. Sylvestre Maurice of IRAP said, "For their Laser Induced Breakdown Spectroscopy (LIBS) instrument, we have delivered a calibration target that is a French duplicate of a target which is on NASA's Curiosity Mars rover. The idea is to see how the two datasets compare".[46]

Austria's Austrian Research Promotion Agency (FFG) aided in the development of a magnetometer installed on the Tianwen-1 orbiter. The Space Research Institute of the Austrian Academy of Sciences in Graz has confirmed the group's contribution to the Tianwen-1 magnetometer and helped with the calibration of the flight instrument.[46]

قالب:Features and artificial objects on Mars

NASA Associate Administrator Thomas Zurbuchen tweeted his congratulations, saying, “Together with the global science community, I look forward to the important contributions this mission will make to humanity’s understanding of the Red Planet.”[47]