في القدم، تواجد تمساح النيل في دلتا النيل ونهر الزرقاء (الأردن), and they are recorded by Herodotus to have inhabited Lake Moeris. They are thought to have become extinct in the Seychelles in the early 19th century. They are known from fossil remains to have once inhabited Lake Edward.[2] The Nile crocodile's current range of distribution extends from the Senegal River, بحيرة تشاد، واداي والسودان to the Cunene ودلتا أوكاڤانگو. In Madagascar, crocodiles occur in the western and southern parts from Sembirano to Port Dauphin. They have occasionally been spotted in زنجبار وجزر القمر.[2] Until recently, many permanent waters in the Sahara still housed relict populations.[3]

In East Africa, they are found mostly in rivers, lakes, marshes, and dams. They have been known to enter the sea in some areas, with one specimen having been seen 11 kiloمترs (36,000 قدم) off St Lucia Bay in 1917. In Madagascar, they have adapted to living in caves.[2]

Thwe species as previously thought to extend into West Africa, but these populations are now recognized as a distinct species, the desert crocodile.[4] 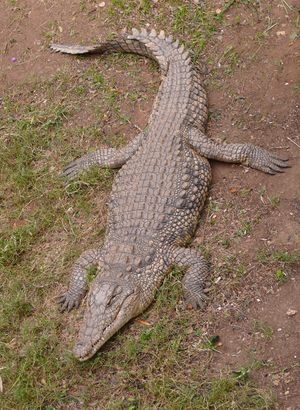 The Nile crocodile is the largest crocodilian in Africa and is sometimes regarded as the second-largest crocodilian after the saltwater crocodile. The male crocodile usually measure from 3.5 to 5 مترs (11 to 16 قدم) long, but very old, mature ones can grow to 5.5 م (18 قدم) or more.[5] Like all crocodiles they are sexually dimorphic, with the males up to 30% larger than the females, though the difference is even more in some species, like the saltwater crocodile. Mature female Nile crocodiles measure 2.4 to 4 م (7 قدم 10 بوصة to 13 قدم 1 بوصة).[6] Typical Nile crocodile weight is around 225 kغ (7,900 أونصة), though large specimens can range up to 730 kغ (26,000 أونصة) in mass.[7] The largest accurately measured male, shot near Mwanza, Tanzania, measured 6.45 م (21.2 قدم) and weighed about 1,090 kغ (38,000 أونصة).[8]

Seven-meter specimens and larger have been reported, but since gross overestimation of size is common, these reports are suspect. The largest living specimen is purported to be a man-eater from Burundi named Gustave; he is believed to be more than 6.1 م (20 قدم) long. Such giants are rare today; before the heavy hunting of the 1940s and 1950s, a larger population base and more extensive wetland habitats meant more giants.

Evidence exists of Nile crocodiles from cooler climates like the southern tip of Africa being smaller, and may reach lengths of only 4 م (13 قدم). Dwarf Nile crocodiles also exist in Mali and in the Sahara Desert, which reach only 2 to 3 م (6 قدم 7 بوصة to 9 قدم 10 بوصة) in length. Their reduced size is probably the result of the less than ideal environmental conditions, not genetics.[9]

From the 1940s to the 1960s, the Nile crocodile was hunted, primarily for high-quality leather, though also for meat with its purported curative properties. The population was severely depleted, and the species faced extinction. National laws, and international trade regulations have resulted in a resurgence in many areas, and the species as a whole is no longer threatened with extinction. Crocodile 'protection programs' are artificial environments where crocodiles exist safely and without the threat of extermination from hunters.

An estimated 250,000 to 500,000 individuals occur in the wild. The Nile crocodile is also widely distributed, with strong, documented populations in many countries in eastern and southern Africa, including Somalia, Ethiopia, Kenya, Zambia and Zimbabwe. Successful sustainable-yield programs focused on ranching crocodiles for their skins have been successfully implemented in this area, and even countries with quotas are moving toward ranching. In 1993, 80,000 Nile crocodile skins were produced, the majority from ranches in Zimbabwe and South Africa.

The situation is more grim in central and west Africa, which make up about two-thirds of the Nile crocodile's habitat. The crocodile population in this area is much more sparse, and has not been adequately surveyed. While the natural population in these areas may be lower due to a less-than-ideal environment and competition with sympatric slender-snouted and dwarf crocodiles, extirpation may be a serious threat in some of these areas. Additional factors are a loss of wetland habitats, and hunting in the 1970s. Additional ecological surveys and establishing management programs are necessary to resolve this.

The Nile crocodile is the top predator in its environment, and is responsible for checking the population of species such as the barbel catfish, a predator that can overeat fish populations on which other species, like birds, depend. The Nile crocodile also consumes dead animals that would otherwise pollute the waters. The primary threat to them, in turn, is humans. While illegal poaching is no longer a problem, they are threatened by pollution, hunting, and accidental entanglement in fishing nets.

Much of the hunting stems from their reputation as a man-eater, which is not entirely unjustified. Unlike other "man-eating" crocodiles, ssuch as the saltwater crocodile, the Nile crocodile lives in close proximity to human populations, so contact is more frequent. Although most attacks do not get reported, the Nile crocodile is estimated to kill hundreds (possibly thousands) of people each year, which is more than all other crocodilian species combined.[10][8] One study posited the number of attacks by Nile crocodiles per year as 275 to 745, of which 63% are fatal, as opposed to an estimated 30 attacks per year by saltwater crocodiles, of which 50% are fatal. In both species, the mean size of crocodiles involved in nonfatal attacks was about 3 م (9.8 قدم) as opposed to a reported range of 2.5–5 م (8.2–16.4 قدم) or larger for crocodiles responsible for fatal attacks. Since a majority of fatal attacks are believed to be predatory in nature, the Nile crocodile can be considered the most prolific predator of humans among wild animals.[11]

The IUCN Red List assesses the Nile crocodile as "Least Concern (LR/lc)".[1] The CITES lists the Nile crocodile under Appendix I (threatened with extinction) in most of its range; and under Appendix II (not threatened, but trade must be controlled) in the remainder, which either allows ranching or sets an annual quota of skins taken from the wild.

The binomial name Crocodylus niloticus is derived from the Greek kroko ("pebble"), deilos ("worm", or "man"), referring to its rough skin; and niloticus, meaning "from the Nile River". The Nile crocodile is called timsah al-nil in Arabic, mamba in Swahili, garwe in Shona, ngwenya in Ndebele, ngwena in Venda, kwena in Sotho and Tswana.