شهربراز (فارسية: شهربراز Shahrbaraz) أو Shahrvaraz (Middle Persian: Šahrwarāz) (died 9 June 630) was king of the Sasanian Empire from 27 April 629 to 9 June 630. He usurped the throne from Ardashir III, and was killed by Sasanian nobles after forty days. Before usurping the Sasanian throne he was a general (spahbed) under Khosrau II (590–628). He is furthermore noted for his important role during the climactic Byzantine–Sasanian War of 602–628, and the events that followed afterwards. His name Shahrbaraz is actually an honorific title, and means "the Boar of the Empire", attesting to his dexterity in military command and his warlike person, as the boar was the animal associated with the Zoroastrian Izad Vahram, the epitome of victory.

Shahrbaraz belonged to the House of Mihran,[1] one of the Seven Parthian clans; he was the son of a certain Ardashir. During Shahrbaraz's later life, he joined the Sasanian army, where he rose to high offices, and was appointed as spahbed of Nēmrōz. He was married to the sister of the Sasanian king Khosrau II, Mirhran, with whom Shahrbaraz had one boy named Shapur-i Shahrvaraz.[2] Shahrbaraz also had another son named Niketas the Persian, who may be from the same woman or from another.

Shahrbaraz is first mentioned when Khosrau II started the last and most devastating of the Byzantine–Sasanian wars, which was going to last 26 years. Khosrau II, along with Shahrbaraz and his other best generals, conquered Dara and Edessa in 604, and in the north, the Byzantines were driven back to the old, pre-591 frontier before Khosrau II gave them most of Sasanian Armenia, parts of Mesopotamia and western half of the Kingdom of Iberia. After reconquering lost territory, Khosrau II withdrew from the battlefield and handed military operations to his best generals. Shahrbaraz was one of them. In 610, Heraclius, an Armenian[3] of probable Arsacid descent,[4] revolted against the Byzantine Emperor Phocas and killed him, crowning himself as Emperor of the Byzantine Empire.[5] After becoming Byzantine Emperor, he prepared a major counter-attack against the Sasanians outside Antioch in 613, but was decisively defeated by Shahrbaraz, who inflicted heavy losses on the Byzantine army and then captured the city,[6][7] giving the Sasanians naval access to the Mediterranean sea. 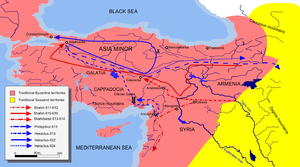 Campaign map from 611 to 624 through Syria, Anatolia, Armenia, and Mesopotamia.

After the Byzantine defeat outside Antioch, Heraclius and his brother Theodore, along with General Nicetas, combined their armies in Syria, but were defeated by Shahrbaraz and his forces who besieged Damascus and captured it along with a large number of Byzantine troops as prisoners.[8] Furthermore, Shahrbaraz also defeated a Byzantine army near Adhri'at, which was important enough for the Arabs to write it down in the Quran.[9]

One of most important events during his career was when he led the Sasanian army towards Palaestina, and after a bloody siege captured Jerusalem, a city sacred to the Christians. After his conquest of Jerusalem the Holy Cross was carried away in triumph. In 618, Shahrbaraz was ordered by Khosrau II to invade Egypt, and by 619, Alexandria, the capital of Byzantine Egypt, was in Sasanian hands.[10][11]

After the fall of Alexandria, Shahrbaraz and his forces extended Sasanian rule southwards along the Nile.[12] By 621, the province was securely in Sasanian hands, and a certain Sahralanyozan was appointed as its governor.[13] In 622, Heraclius counter-attacked against the Sasanian Empire in Anatolia. Shahrbaraz was sent over there to deal with him, but was eventually defeated by him.[14]

Shahrbaraz, along with a smaller army, later managed to slip through Heraclius' flanks and bee-lined for Chalcedon, the Sasanian base across the Bosphorus from Constantinople. Khosrau II coordinated with the Khagan of the Avars so as to launch a coordinated attack on Constantinople from both European and Asiatic sides.[15] The army of Shahrbaraz stationed themselves at Chalcedon, while the Avars placed themselves on the European side of Constantinople and destroyed the Aqueduct of Valens.[16] Because of the Byzantine navy's control of the Bosphorus strait, however, the Sasanians could not send troops to the European side to aid their ally.[17][18] This reduced the effectiveness of the siege, because the Sasanians were experts in siege warfare.[19] Furthermore, the Sasanians and Avars had difficulties communicating across the guarded Bosphorus—though undoubtedly, there was some communication between the two forces.[15][18][20] 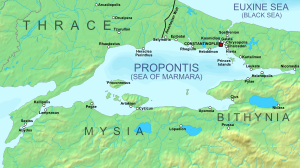 On 7 August, a fleet of Sasanian rafts ferrying troops across the Bosphorus was surrounded and destroyed by Byzantine ships. The Slavs under the Avars attempted to attack the sea walls from across the Golden Horn, while the main Avar host attacked the land walls. Patrician Bonus' galleys rammed and destroyed the Slavic boats; the Avar land assault from 6 to 7 August also failed.[21] With the news that Theodore had decisively triumphed over Shahin (supposedly leading Shahin to die from depression), the Avars retreated to the Balkan hinterland within two days, never to threaten Constantinople seriously again. Even though the army of Shahrbaraz was still encamped at Chalcedon, the threat to Constantinople was over.[22][23]

In 627, Khosrau sent Shahrbaraz a letter, which said that he should send his army to Ctesiphon. Shahrbaraz, however, disobeyed, and moved to Asuristan, where he set up a camp in Ardashir Khurrah. Khosrau then sent Farrukhzad to negotiate with him. However, Farrukhzad made a secret conspiracy against Khosrau and joined Shahrbaraz.[24] 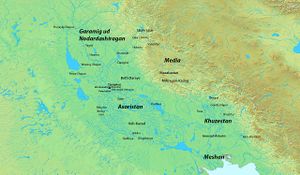 After the death of Kavadh II, Heraclius sent Shahrbaraz a letter saying:

Shahrbaraz had played an important role in the Byzantine–Sasanian War of 602–628, and the events that occurred after the war; his mutiny against Khosrau II resulted in a Byzantine Pyrrhic victory and caused the Sasanian Empire to fall into a civil war. After the death of Shahrbaraz, his son Shapur-i Shahrvaraz deposed Borandukht and became king of the Sasanian Empire. His reign, however, did not last long, and he was shortly deposed by the Sasanian nobles.[26] During the same period, Niketas entered in the service of the Byzantines, and would later appear as one of the Byzantine generals at the Battle of Yarmouk during the Arab–Byzantine wars.[27]