Shapur III, knowing about the murder of many Sasanian kings by the nobles, declared to them in his accession speech, that he would not allow deceit, greed or self-righteousness at his court.[4] However, in the opinion of the nobility, this was unacceptable.[5]

Negotiations between the Romans and the Sasanians which had begun in the reign of Ardashir II culminated in a treaty of mutual friendship in the year 384. The Persian diplomat who was part of this negotiation was a certain Yazdan-Friy-Shabuhr.[6]

According to this treaty, Armenia was partitioned between the Romans and the Persians. Therefore, two kingdoms were formed, one a vassal of Rome and the other, of Persia. The smaller of these, which comprised the more western districts, which was assigned to Rome was committed to the charge of the Arsaces III (Arshak III) who had been made king by Manuel Mamikonian, the son of the unfortunate Papas (Pap), and the grandson of Arsaces II (Arshak II) contemporary with Julian the Apostate. The larger portion, which consisted of the regions lying towards the east, passed under the suzerainty of Persia, and was handed over to an Arshakuni, named Khosrov IV, a Christian. Thus friendly relations were established between Rome and Persia which survived for thirty-six years.

Shapur III died in 388, after reigning a little more than five years. He was a man of simple tastes, and was fond of spending his time outdoors in his tents. He died when some nobles cut the ropes of a large tent that he had erected in one of his palace courts, so that the tent fell on top of him.[7] He was shortly succeeded by his son Bahram IV. 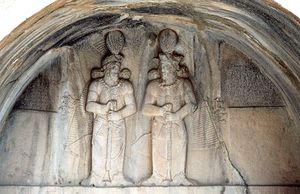 Relief of Shapur III and his father Shapur II.

Shapur III left behind him a sculptured memorial, which is still to be seen in the vicinity of Kermanshah. It consists of two very similar figures, looking towards each other, and standing in an arched frame.

On either side of the figures are inscriptions in the Old Pahlavi character, whereby we are enabled to identify the individuals represented with the second and the third Shapur. They are identical in form, with the exception that the names in the right-hand inscription are "Shapur, Hormizd, Narseh," while those in the left-hand one are "Shapur, Shapur, Hormizd."

It has been supposed that the right-hand figure was erected by Shapur II and the other afterwards added by Shapur III; but the unity of the whole sculpture, and its inclusion under a single arch, seem to indicate that it was set up by a single sovereign, and was the fruit of a single conception.

If this be so, we must necessarily ascribe it to the later of the two monarchs commemorated, i.e. to Shapur III, who must be supposed to have possessed more than usual filial piety, since the commemoration of their predecessors upon the throne is very rare among the Sasanians.