Bahram II is said to have ruled at first tyrannically, and to have greatly disgusted all his principal nobles, who went so far as to form a conspiracy against him, and intended to put him to death. The chief of the Magi, however, interposed, and, having effectually alarmed the king, brought him to acknowledge his wrong and to promise an entire change of conduct. The nobles upon this returned to their allegiance; and Bahram, during the remainder of his reign, is said to have been distinguished for wisdom and moderation, and to have rendered himself popular with every class of his subjects.

Bahram II was the oldest son of Bahram I. During his youth, he grew up in Khuzistan, a province inhabited by many Assyrian Christians. He seems to have learned the doctrine of Christianity and some of the Syriac language of Mesopotamia. During the late reign of his father, Bahram had not reached adulthood yet, and was appointed as the governor of Sistan. When his father died in 276, he succeeded the latter, being aided in the affairs of his empire by his mentor Kartir. Bahram II was shortly married to Shapurdukhtak, the daughter of Shapur Mishanshah, who was the son of Shapur I,[3] meaning that Bahram II married his own cousin.[4] 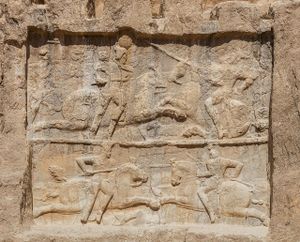 In 282, while Persia was in civil war, the Roman Emperor Carus crossed the Euphrates along with his troops and invaded Mesopotamia wreaking havoc. Bahram II was not able to offer any resistance as his troops were occupied fighting against his cousin Hormizd in Sakastan. Mesopotamia was ravaged and the city of Ctesiphon was occupied by the Roman troops. However, as an oracle had predicted earlier, the death of Carus cut short his career as well as the Roman advance.[6] Following Carus's death, the Romans retreated, Bahram retook Mesopotamia.[4] In 283 Bahram II defeated his brother in Sakastan, and had the latter executed and replaced with his own son Bahram III as the governor of Sakastan. He later had rock reliefs cut at Bishapur and Naqsh-e Rustam to commemorate his victory.[7] In 286, however, Diocletian resumed hostilities with Persia, and marched into Persian territory in aid of the Armenian prince Tiridates who was in rebellion against Persia. Armenia was separated after a couple of battles and Tiridates declared himself independent.

Tiridates achieved extraordinary success during this period. He defeated two Persian armies in the open field, drove out the garrisons which held the more important of the fortified towns, and became undisputed master of Armenia. He even crossed the border which separated Armenia from Persia, and gained signal victories on admitted Persian ground. Bahram II died soon afterwards in an extremely dejected state. He was succeeded by his son Bahram III.

Of Bahram II's reign some theological inscriptions exist (F. Stolze and J. C. Andreas, Persepolis (1882), and E. W. West, "Pahlavi Literature" in Grundriss d. iranischen Philologie, ii. pp. 75–129).[8] In November 2011, according to a video by the Iranian state news service, several reliefs near the city of Kerman dating back to the period of Bahram II were destroyed with hammers by unknown vandals.[9]

Bahram II, like his father, treated Kartir with much respect, saw him as a mentor and elevated him to the Wuzurgan rank. [10]