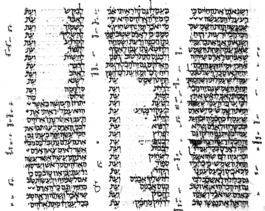 Ecclesiastes 3 in the Leningrad Codex

Kohelet proclaims (1:2) "Vanity of vanities! All is futile!"; the Hebrew word hevel, "vapor", can figuratively mean "insubstantial", "vain", "futile", or "meaningless". Given this, the next verse presents the basic existential question with which the rest of the book is concerned: "What profit hath a man for all his toil, in which he toils under the sun?", expressing that the lives of both wise and foolish people all end in death. While Kohelet endorses wisdom as a means for a well-lived earthly life, he is unable to ascribe eternal meaning to it. In light of this perceived senselessness, he suggests that human beings should enjoy the simple pleasures of daily life, such as eating, drinking, and taking enjoyment in one's work, which are gifts from the hand of God. The book concludes with the injunction to "Fear God and keep his commandments; for that is the all of mankind. Since every deed will God bring to judgment, for every hidden act, be it good or evil".

Scholars disagree about the themes of Ecclesiastes: whether it is positive and life-affirming, or deeply pessimistic;[1] whether it is coherent or incoherent, insightful or confused, orthodox or heterodox; whether the ultimate message of the book is to copy Kohelet, the wise man, or to avoid his errors.[2] At times Kohelet raises deep questions; he "doubted every aspect of religion, from the very ideal of righteousness, to the by now traditional idea of divine justice for individuals".[3] Some passages of Ecclesiastes seem to contradict other portions of the Old Testament, and even itself.[1] The Talmud even suggests that the rabbis considered censoring Ecclesiastes due to its seeming contradictions.[4] One suggestion for resolving the contradictions is to read the book as the record of Kohelet's quest for knowledge: opposing judgments (e.g., "the dead are better off than the living" (4:2) vs. "a living dog is better off than a dead lion" (9:4)) are therefore provisional, and it is only at the conclusion that the verdict is delivered (11–12:7). On this reading, Kohelet's sayings are goads, designed to provoke dialogue and reflection in his readers, rather than to reach premature and self-assured conclusions.[5]

The subjects of Ecclesiastes are the pain and frustration engendered by observing and meditating on the distortions and inequities pervading the world, the uselessness of human ambition, and the limitations of worldly wisdom and righteousness. The phrase "under the sun" appears twenty-nine times in connection with these observations; all this coexists with a firm belief in God, whose power, justice and unpredictability are sovereign.[6] History and nature move in cycles, so that all events are predictable and unchangeable, and life, without the sun, has no meaning or purpose: the wise man and the man who does not study wisdom will both die and be forgotten: man should be reverent ("Fear God"), but in this life it is best to simply enjoy God's gifts.[7]

In Judaism, Ecclesiastes is read either on Shemini Atzeret (by Yemenites, Italians, some Sepharadim, and the mediaeval French Jewish rite) or on the Shabbat of the Intermediate Days of Sukkot (by Ashkenazim). If there is no Intermediate Sabbath of Sukkot, Ashkenazim too read it on Shemini Atzeret (or, in Israel, on the first Shabbat of Sukkot). It is read on Sukkot as a reminder not to get too caught up in the festivities of the holiday, and to carry over the happiness of Sukkot to the rest of the year by telling the listeners that, without God, life is meaningless.

The final poem of Kohelet[8] has been interpreted in the Targum, Talmud and Midrash, and by the rabbis Rashi, Rashbam and ibn Ezra, as an allegory of old age. 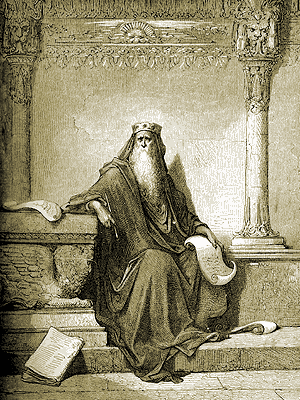 Ecclesiastes has had a deep influence on Western literature. It contains several phrases that have resonated in British and American culture, such as "eat, drink and be merry", "nothing new under the sun", "a time to be born and a time to die", and "vanity of vanities; all is vanity".[9] American novelist Thomas Wolfe wrote: "[O]f all I have ever seen or learned, that book seems to me the noblest, the wisest, and the most powerful expression of man's life upon this earth—and also the highest flower of poetry, eloquence, and truth. I am not given to dogmatic judgments in the matter of literary creation, but if I had to make one I could say that Ecclesiastes is the greatest single piece of writing I have ever known, and the wisdom expressed in it the most lasting and profound."[10]