Bnei Brak or Bene Beraq (بالعبرية: בְּנֵי בְּרַק‎ (audio) (المساعدة·معلومات)) is a city located on the central Mediterranean coastal plain in Israel, just east of Tel Aviv. A center of Haredi Judaism, Bnei Brak covers an area of 709 hectares (1752 acres, or 2.74 square miles), and had a population of 204,639 in 2019.[1] It is one of the poorest and most densely populated cities in Israel,[2] and the 8th-most densely populated city in the world.

Bnei Brak takes its name from the ancient Biblical city of Beneberak, mentioned in the Tanakh (Joshua 19:45) in a long list of towns within the allotment of the tribe of Dan. Bnei Brak was founded as an agricultural village by eight Polish Hasidic families who had come to Palestine as part of the Fourth Aliyah. Yitzchok Gerstenkorn led them. It was founded about 4 kilometers (2.5 miles) from the site of Biblical Beneberak. Bnei Brak was originally a moshava, and the primary economic activity was the cultivation of citrus fruits. Due to a lack of land, many of the founders turned to other occupations, and the village began to develop an urban character. Arye Mordechai Rabinowicz, formerly rabbi of Kurów in Poland, was the first rabbi. He was succeeded by Rabbi Yosef Kalisz, a scion of the Vurker dynasty. The town was set up as a religious settlement from the outset, as is evident from this description of the pioneers: "Their souls were revived by the fact that they merited what their predecessors had not. What particularly revived their weary souls in the mornings and toward evening, when they would gather in the beis medrash situated in a special shack which was built immediately upon the arrival of the very first settlers, for tefilla betzibbur (communal prayer) three times a day, for the Daf Yomi shiur, and a Gemara shiur and an additional one in Mishnayos and the Shulchan Oruch."[5]

In 1928, the Great Synagogue was completed, and the village committee celebrated its inauguration by presenting statistics noting its development over the past four years. Bnei Brak, with a population of about 800 residents, covered about 2,000 dunams, including about 800 dunams which were citrus groves. It had 116 houses, 31 huts, six public buildings, and 48 cowsheds. In the summer of 1929, Bnei Brak was connected to the electricity grid. In the 1931 census of Palestine, the population of Benei Beraq was 956, all Jewish, in 255 houses.[6] In 1940, it had 4,500 residents and 25 factories. In 1948, the population was 9,300.

In April 2020, the entire city of Bnei Brak was placed under quarantine due to the coronavirus outbreak.[7] 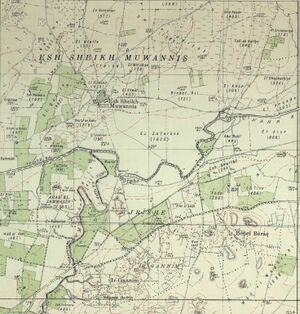 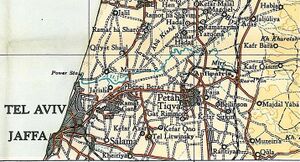 Beginning in the 1960s, the rebbes of the Ukrainian Ruzhin dynasty (Sadigura, Husiatyn, Bohush), who had formerly lived in Tel Aviv, moved to Bnei Brak. In the 1990s, they were followed by the rebbe of Modzhitz. Unlike the former four Gerrer rebbes, who lived in Jerusalem, the current rebbe was a Bnei Brak resident until 2012. The rebbes of Alexander, Biala-Bnei-Brak, Koidenov, Machnovke, Nadvorne, Premishlan, Radzin, Shomer Emunim. Slonim-Schwarze, Strykov, Tchernobil, Trisk-Bnei-Brak and Zutshke reside in Bnei Brak. Rabbi Moshe Yehuda Leib Landau was the Rabbi of Bnei Brak until his death on March 30, 2019.[8] He was a respected authority on Jewish law and kashrut supervision. The "Rav Landau" hechsher (kosher supervision) is widely accepted. Rabbi Nissim Karelitz, chief Rabbi (av beis din) of the Lithuanian Haredi community, heads a beth din of Lithuanian and Hasidic dayanim, called She'eris Yisroel.

According to figures by the municipality of Bnei Brak,[9] the city has a population of over 181,000 residents, the majority of whom are Haredi Jews.[10] It also has the largest population density of any city in Israel, with 25,540/كم2 (66,100/ميل2). In the 2021 Israeli legislative election, 89% of the voters chose Haredi parties.[11] Pardes Katz, a neighborhood of about 30,000 inhabitants in northern Bnei Brak, is the sole neighborhood of the city where the majority of residents are not Haredi. 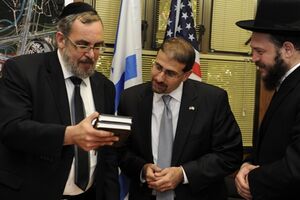 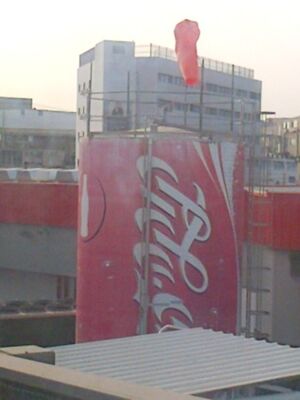 The Coca-Cola Israel bottling plant at the major highway exit to Bnei Brak.

One of the landmarks of Bnei Brak is the Coca-Cola bottling plant in Kahaneman St. It is owned by the Central Bottling Company (CBC), which has held the Israeli franchise for Coca-Cola products since 1968. It is among Coca-Cola's ten largest single-plant bottling facilities worldwide.[12]

Two major factories which dominated the centre of Bnei Brak for many years were the Dubek cigarette factory and the Osem food factory. As the town grew they found themselves in the middle of a residential area; both left the area. Osem's main factory is now located on Jabotinsky road in Petah Tikva, just next to Bnei Brak.

In 2011 construction started on a business district, which will include 15 office towers.[13] Several of the towers of the Bnei Brak Business Center are already built اعتبارا من 2020[تحديث], and other buildings won't be completed until after 2021.[14] 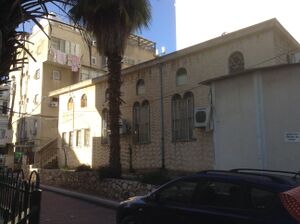 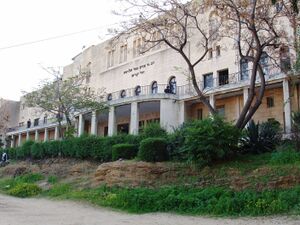 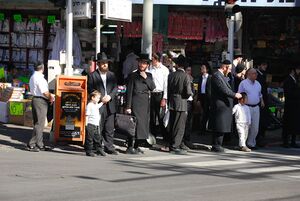 Until the 1970s, the Bnei Brak municipality was headed by religious Zionist mayors.[بحاجة لمصدر] After Mayor Gottlieb of the National Religious Party was defeated, Haredi parties grew in status and influence; since then they have governed the city. As the Haredi population grew, the demand for public religious observance increased and more residents requested the closure of their neighbourhoods to vehicular traffic on Shabbat. In a short period of time most of Bnei Brak's secular and Religious Zionist residents migrated elsewhere, and the city has become almost homogeneously Haredi. The city has one secular neighborhood, Pardes Katz.[15] Some names of streets with a Zionist connotation were renamed for prominent Haredi figures, for example, the part of Herzl St. south of Jabotinsky street was changed to HaRav Shach St. Bnei Brak is one of the two poorest cities in Israel. A street in Bnei Brak was named after a towns founders who was a great-grandfather of murdered journalist Daniel Pearl.[16]

Bnei Brak is home to Israel's first women-only department store,[17] only one example of gender segregation in what is viewed as an ultra-orthodox city. Bnei Brak was home to one of the original gender segregated bus lines that Israel's courts ruled were illegal. Mehadrin bus lines are a type of bus line in Israel that mostly ran in and/or between major Haredi population centers and in which gender segregation and other rigid religious rules observed by some ultra-Orthodox Jews were applied until 2011. In these sex-segregated buses, female passengers sat in the back of the bus and entered and exited the bus through the back door if possible, while the male passengers sat in the front part of the bus and entered and exited through the front door.[18] Additionally, "modest dress" was often required for women, playing a radio or secular music on the bus was avoided, advertisements were censored.[19]

Bnei Brak received national attention when it lost a battle to have women candidates' photos removed from advertisements for Likud's campaign. In the city's ultra-Orthodox neighborhoods, women are usually absent from advertisements and billboards because pictures of women are viewed as "sexually provocative". The city's representatives claimed they had been ordered to remove signs picturing Likud contenders such as Miri Regev and Gila Gamliel in spite of the fact that the photos showed them in modest dress. The police were summoned and they informed city officials the signs could not be removed. City officials protested that they were only trying to protect the sensitivities of religious residents. On the other hand, Orly Erez-Likhovski, head of the legal department at the Israel Religious Action Center, said this was a victory for gender equality: "“I am very happy that the officials from the Likud didn’t give up, fought the municipality and the police who first arrived on the scene. It shows that the message is starting to penetrate on every level that exclusion of women is illegal and unacceptable. It doesn't always translate to the people on the ground but we see that great progress is being made – even in Bnei Brak, even in the ultra-Orthodox sector. This is an important message.”[20]

Bnei Brak is twinned with: