المصطلح "الامبراطورية النمساوية" is also used for the Habsburg possessions before 1804, which had no official collective name, although Austria is more frequent; the term of النمسا-المجر has also been used, incorrectly.

The Austrian Empire was founded by the Habsburg monarch الامبراطور الروماني فرانسيس الثاني (الذي أصبح فرانسيس الأول من النمسا), as a state comprising his personal lands within and outside of the Holy Roman Empire.

This was a reaction to Napoleon Bonaparte's proclamation of the الامبراطورية الفرنسية الأولى in 1804.

Changes shaping the nature of the Holy Roman Empire took place during conferences in Rastatt (1797–1799) and Regensburg (1801–1803). On 24 March 1803, the Imperial Recess (ألمانية: Reichsdeputationshauptschlusscode: de is deprecated ) was declared, which reduced the number of ecclesiastical states from 81 to only 3 and the free imperial cities from 51 to 6. This measure was aimed at replacing the old constitution of the Holy Roman Empire, but the actual consequence of the Imperial Recess was the end of the empire. Taking this significant change into consideration, the Holy Roman Emperor Francis II created the title Emperor of Austria, for himself and his successors.

Klemens von Metternich became Foreign Minister in 1809. He also held the post of Chancellor of State from 1821 until 1848, under both Francis I and his son Ferdinand I. The period of 1815–1848 is also referred to as the "Age of Metternich".[2] During this period, Metternich controlled the Habsburg monarchy's foreign policy. He also had a major influence in European politics. He was known for his strong conservative views and approach in politics. Metternich's policies were strongly against revolution and liberalism.[3] In his opinion, liberalism was a form of legalized revolution.[4] Metternich believed that absolute monarchy was the only proper system of government.[2] This notion influenced his anti-revolutionary policy to ensure the continuation of the Habsburg monarchy in Europe. Metternich was a practitioner of balance-of-power diplomacy.[5] His foreign policy aimed to maintain international political equilibrium to preserve the Habsburgs' power and influence in international affairs. Following the Napoleonic Wars, Metternich was the chief architect of the Congress of Vienna in 1815.[5] The Austrian Empire was the main beneficiary from the Congress of Vienna and it established an alliance with Britain, Prussia, and Russia forming the Quadruple Alliance.[3] The Austrian Empire also gained new territories from the Congress of Vienna, and its influence expanded to the north through the German Confederation and also into Italy.[3] Due to the Congress of Vienna in 1815, Austria was the leading member of the German Confederation.[6] Following the Congress, the major European powers agreed to meet and discuss resolutions in the event of future disputes or revolutions. Because of Metternich's main role in the architecture of the Congress, these meetings are also referred to as the "Metternich congress" or "Metternich system". Under Metternich as the Austrian foreign minister, other congresses would meet to resolve European foreign affairs. These included the Congresses of Aix-la-Chapelle (1818), Carlsbad (1819), Troppau (1820), Laibach (1821), and Verona (1822).[2] The Metternich congresses aimed to maintain the political equilibrium among the European powers and prevent revolutionary efforts. These meetings also aimed to resolve foreign issues and disputes without resorting to violence. By means of these meetings and by allying the Austrian Empire with other European powers whose monarchs had a similar interest in preserving conservative political direction, Metternich was able to establish the Austrian Empire's influence on European politics. Also, because Metternich used the fear of revolutions among European powers, which he also shared, he was able to establish security and predominance of the Habsburgs in Europe.[3]

Under Metternich, nationalist revolts in Austrian north Italy and in the German states were forcibly crushed. At home, he pursued a similar policy to suppress revolutionary and liberal ideals. He employed the Carlsbad Decrees of 1819, which used strict censorship of education, press and speech to repress revolutionary and liberal concepts.[2] Metternich also used a wide-ranging spy network to dampen down unrest.

Metternich operated very freely with regard to foreign policy under Emperor Francis I's reign. Francis died in 1835. This date marks the decline of Metternich's influence in the Austrian Empire. Francis' heir was his son Ferdinand I, but he suffered from health issues. Ferdinand's accession preserved the Habsburg dynastic succession, but he was not capable of ruling.[3] The leadership of the Austrian Empire was transferred to a state council composed of Metternich, Francis I's brother Archduke Louis, and Count Franz Anton Kolowrat, who later became the first Minister-President of the Austrian Empire. The liberal Revolutions of 1848 in the Austrian Empire forced Metternich's resignation. Metternich is remembered for his success in maintaining the status quo and the Habsburg influence in international affairs.[2] No Habsburg foreign minister following Metternich held a similar position within the empire for such a long time nor held such a vast influence on European foreign affairs.[3]

Historians often remember the Metternich era as a period of stability: the Austrian Empire fought no wars nor did it undergo any radical internal reforms.[7] However, it was also thought of as a period of economic growth and prosperity in the Austrian Empire.[7] The population of Austria rose to 37.5 million by 1843. Urban expansion also occurred and the population of Vienna reached 400,000. During the Metternich era, the Austrian Empire also maintained a stable economy and reached an almost balanced budget, despite having a major deficit following the Napoleonic Wars.[8] 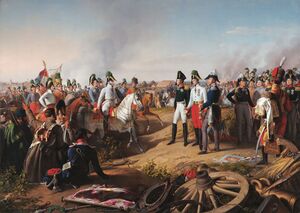 Karl von Schwarzenberg and the monarchs of Austria, Prussia, and Russia after the Battle of Leipzig, 1813

From March 1848 through November 1849, the Empire was threatened by revolutionary movements, most of which were of a nationalist character. Besides that, liberal and even socialist currents resisted the empire's longstanding conservatism. Although most of the revolution plans failed, some changes were made; significant lasting reforms included the abolition of serfdom, cancellation of censorship and a promise made by Ferdinand I of Austria said to implement a constitution throughout the whole Empire. 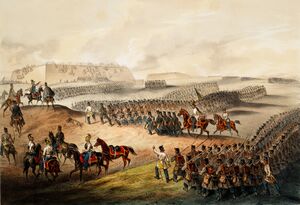 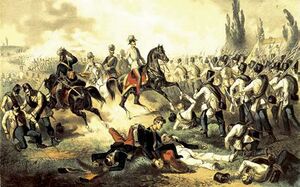 After the death of Prince Felix of Schwarzenberg in 1852, the Minister of the Interior Baron Alexander von Bach largely dictated policy in Austria and Hungary. Bach centralized administrative authority for the Austrian Empire, but he also endorsed reactionary policies that reduced freedom of the press and abandoned public trials. He later represented the Absolutist (or Klerikalabsolutist) direction, which culminated in the concordat of August 1855 that gave the Roman Catholic Church control over education and family life. This period in the history of the Austrian Empire would become known as the era of neo-absolutism, or Bach's absolutism.

The pillars of the so-called Bach system (Bachsches System) were, in the words of Adolf Fischhof, four "armies": a standing army of soldiers, a sitting army of office holders, a kneeling army of priests and a fawning army of sneaks.[بحاجة لمصدر] Prisons were full of political prisoners, like Czech nationalist journalist and writer Karel Havlíček Borovský who was forcibly expatriated (1851–1855) to Brixen. This exile undermined Borovský's health and he died soon afterwards. This affair earned Bach a very bad reputation amongst Czechs and subsequently led to the strengthening of the Czech national movement.[بحاجة لمصدر]

However, Bach's relaxed ideological views (apart from the neo-absolutism) led to a great rise in the 1850s of economic freedom. Internal customs duties were abolished, and peasants were emancipated from their feudal obligations.[9]

In her capacity as leader of the German Confederation, Austria participated with volunteers in the First War of Schleswig (1848–1850).[6]

Sardinia allied itself with France for the conquest of Lombardy–Venetia. Austria was defeated in the 1859 armed conflict. The Treaties of Villafranca and Zürich removed Lombardy, except for the part east of the Mincio river, the so-called Mantovano.[10]

After the second war with Denmark in 1864, Holstein came under Austrian, Schleswig and Lauenburg under Prussian administration. But the internal difficulties continued.[11] Diets replaced the parliament in 17 provinces, the Hungarians pressed for autonomy, and Venetia was attracted by the now unified Italy.

After the Austrian army was defeated in the Austro-Prussian War of 1866 and the German Confederation was dissolved, the Austro-Hungarian Compromise of 1867 was adopted. By this act, the Kingdom of Hungary and the Empire of Austria as two separate entities joined on an equal basis to form the Dual Monarchy of Austria-Hungary. During World War I,

The frequent abbreviation K.u.K. (Kaiserliche und Königliche, "Imperial and Royal") does not refer to that dual monarchy but originated in 1745, when the "royal" part referred to the Apostolic Kingdom of Hungary.[بحاجة لمصدر] However, during World War I Austria-Hungary issued military stamps for use in occupied regions, with the text "K.u.K. Feldpost" or K.u.K. Militärpost.