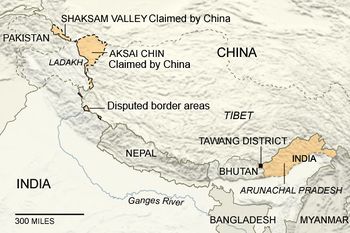 Because of its 5,000 مترs (16,000 قدم) elevation, the desolation of Aksai Chin meant that it had no human importance other than as an ancient trade route, which provided a temporary pass during summer for caravans of yaks between Xinjiang and Tibet.[16] For military campaigns, the region held great importance, as it was on the only route from Tarim Basin to Tibet that was passable all year round. The Dzungar Khanate used this route to enter Tibet in 1717.[17] 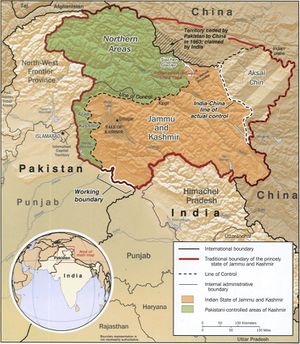 One of the earliest treaties regarding the boundaries in the western sector was signed in 1842. Ladakh was conquered a few years earlier by the armies of Raja Gulab Singh (Dogra) under the suzerainty of the Sikh Empire. Following an unsuccessful campaign into Tibet in 1840, Gulab Singh and the Tibetans signed a treaty, agreeing to stick to the "old, established frontiers", which were left unspecified.[18][19] The British defeat of the Sikhs in 1846 resulted in the transfer of the Jammu and Kashmir region including Ladakh to the British, who then installed Gulab Singh as the Maharaja under their suzerainty. British commissioners contacted Chinese officials to negotiate the border, who did not show any interest.[20] The British boundary commissioners fixed the southern end of the boundary at Pangong Lake, but regarded the area north of it as terra incognita.[21] 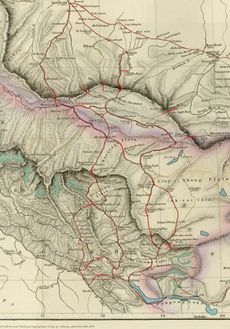 Map of Central Asia (1873) from T. Douglas Forsyth. Khotan is near top right corner. The border claimed by the British Indian Empire is shown in the two-toned purple and pink band with Shahidulla and the Kilik, Kilian and Sanju Passes north of the border. 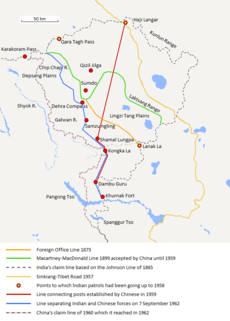 The map shows the Indian and Chinese claims of the border in the Aksai Chin region, the Macartney-MacDonald line, the Foreign Office Line, as well as the progress of Chinese forces as they occupied areas during the Sino-Indian War.
المقالة الرئيسية: خط جونسون (حدود)

William Johnson, a civil servant with the Survey of India proposed the "Johnson Line" in 1865, which put Aksai Chin in Kashmir.[22] This was the time of the Dungan revolt, when China did not control most of Xinjiang, so this line was never presented to the Chinese.[22] Johnson presented this line to the Maharaja of Kashmir, who then claimed the 18,000 square kilometres contained within,[22] and by some accounts territory further north as far as the Sanju Pass in the Kun Lun Mountains. The Maharajah of Kashmir constructed a fort at Shahidulla (modern-day Xaidulla), and had troops stationed there for some years to protect caravans.[23] Eventually, most sources placed Shahidulla and the upper Karakash River firmly within the territory of Xinjiang (see accompanying map).[بحاجة لمصدر] According to Francis Younghusband, who explored the region in the late 1880s, there was only an abandoned fort and not one inhabited house at Shahidulla when he was there – it was just a convenient staging post and a convenient headquarters for the nomadic Kirghiz.[24]قالب:Primary-source-inline The abandoned fort had apparently been built a few years earlier by the Kashmiris.[25]قالب:Primary-source-inline In 1878 the Chinese had reconquered Xinjiang, and by 1890 they already had Shahidulla before the issue was decided.[22] By 1892, China had erected boundary markers at Karakoram Pass.[26]

In 1897 a British military officer, Sir John Ardagh, proposed a boundary line along the crest of the Kun Lun Mountains north of the Yarkand River.[23] At the time Britain was concerned at the danger of Russian expansion as China weakened, and Ardagh argued that his line was more defensible. The Ardagh line was effectively a modification of the Johnson line, and became known as the "Johnson-Ardagh Line". 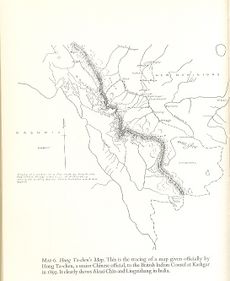 The map given by Hung Ta-chen to the British consul at Kashgar in 1893. The boundary, marked with a thin dot-dashed line, matches the Johnson line[27]:pp. 73, 78

In 1893, Hung Ta-chen, a senior Chinese official at St. Petersburg, gave maps of the region to George Macartney, the British consul general at Kashgar, which coincided in broad details.[27]:pp. 73, 78 In 1899, Britain proposed a revised boundary, initially suggested by Macartney and developed by the Governor General of India Lord Elgin. This boundary placed the Lingzi Tang plains, which are south of the Laktsang range, in India, and Aksai Chin proper, which is north of the Laktsang range, in China. This border, along the Karakoram Mountains, was proposed and supported by British officials for a number of reasons. The Karakoram Mountains formed a natural boundary, which would set the British borders up to the Indus River watershed while leaving the Tarim River watershed in Chinese control, and Chinese control of this tract would present a further obstacle to Russian advance in Central Asia.[28] The British presented this line, known as the Macartney–MacDonald Line, to the Chinese in 1899 in a note by Sir Claude MacDonald. The Qing government did not respond to the note.[29] According to some commentators, China believed that this had been the accepted boundary.[30][31]

Both the Johnson-Ardagh and the Macartney-MacDonald lines were used on British maps of India.[22] Until at least 1908, the British took the Macdonald line to be the boundary,[32] but in 1911, the Xinhai Revolution resulted in the collapse of central power in China, and by the end of World War I, the British officially used the Johnson Line. However they took no steps to establish outposts or assert actual control on the ground.[26] In 1927, the line was adjusted again as the government of British India abandoned the Johnson line in favor of a line along the Karakoram range further south.[26] However, the maps were not updated and still showed the Johnson Line.[26] 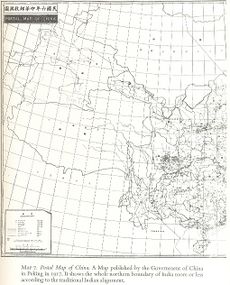 Postal map of China published by the Republic of China in 1917. The boundary in Aksai Chin is as per the Johnson line.

From 1917 to 1933, the Postal Atlas of China, published by the Government of China in Peking had shown the boundary in Aksai Chin as per the Johnson line, which runs along the Kunlun mountains.[27][31] The Peking University Atlas, published in 1925, also put the Aksai Chin in India.[33] When British officials learned of Soviet officials surveying the Aksai Chin for Sheng Shicai, warlord of Xinjiang in 1940–1941, they again advocated the Johnson Line.[22] At this point the British had still made no attempts to establish outposts or control over the Aksai Chin, nor was the issue ever discussed with the governments of China or Tibet, and the boundary remained undemarcated at India's independence.[26] 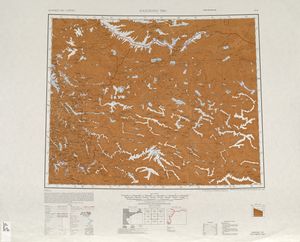 On 1 July 1954 Prime Minister Jawaharlal Nehru wrote a memo directing that the maps of India be revised to show definite boundaries on all frontiers. Up to this point, the boundary in the Aksai Chin sector, based on the Johnson Line, had been described as "undemarcated."[28]

During the 1950s, the People's Republic of China built a 1,200 km (750 mi) road connecting Xinjiang and western Tibet, of which 179 km (112 mi) ran south of the Johnson Line through the Aksai Chin region claimed by India.[16][26] Aksai Chin was easily accessible to the Chinese, but was more difficult for the Indians on the other side of the Karakorams to reach.[16] The Indians did not learn of the existence of the road until 1957, which was confirmed when the road was shown in Chinese maps published in 1958.[34]

The Indian position, as stated by Prime Minister Nehru, was that the Aksai Chin was "part of the Ladakh region of India for centuries" and that this northern border was a "firm and definite one which was not open to discussion with anybody".[16]

The Chinese minister Zhou Enlai argued that the western border had never been delimited, that the Macartney-MacDonald Line, which left the Aksai Chin within Chinese borders was the only line ever proposed to a Chinese government, and that the Aksai Chin was already under Chinese jurisdiction, and that negotiations should take into account the status quo.[16]

Despite this region being nearly uninhabitable and having no resources, it remains strategically important for China as it connects Tibet and Xinjiang. Construction started in 1951 and the road was completed in 1957. The construction of this highway was one of the triggers for the Sino-Indian War of 1962.[35] The resurfacing of the highway taken up for first time in about 50 years was completed in 2013.[36]

In June 2006, satellite imagery on the Google Earth service revealed a 1:500[37] scale terrain model[38] of eastern Aksai Chin and adjacent Tibet, built near the town of Huangyangtan, about 35 kiloمترs (115,000 قدم) southwest of Yinchuan, the capital of the autonomous region of Ningxia in China.[39] A visual side-by-side comparison shows a very detailed duplication of Aksai Chin in the camp.[40] The 900 م × 700 م (3,000 قدم × 2,300 قدم)[بحاجة لمصدر] model was surrounded by a substantial facility, with rows of red-roofed buildings, scores of olive-colored trucks and a large compound with elevated lookout posts and a large communications tower. Such terrain models are known to be used in military training and simulation, although usually on a much smaller scale.

Local authorities in Ningxia claim that their model of Aksai Chin is part of a tank training ground, built in 1998 or 1999.[37]

A continued face-off in May and June 2020 between Indian and Chinese troops near Pangong Tso Lake culminated in a violent clash on 16 June 2020, with at least 20 deaths from the Indian side and no official reported deaths from the Chinese side. Both sides claim provocation from the other. [46][47][42][48][49][50][51]