The Congressional Progressive Caucus (CPC) is a membership organization within the Democratic congressional caucus in the United States Congress.[5] The CPC is a left-leaning organization that works to advance progressive and liberal issues and positions and represents the progressive faction of the Democratic Party.[6][7] It was founded in 1991 and has grown steadily since then, having more recently added 20 members since 2005 and having hired its first full-time Executive Director, Bill Goold, in May of that year. Subsequent Executive Directors have included Andrea Miller (2009–2011) and Brad Bauman (2011–2014). With 78 members, it is currently the largest Democratic congressional caucus. The CPC is currently co-chaired by U.S. Representatives Raúl Grijalva (D-AZ) and Mark Pocan (D-WI). The current Executive Director is Mike Darner. Of the 20 standing committees of the House in the 111th Congress, 10 were chaired by members of the CPC. Those chairmen were replaced when the Republicans took control of the House in the 112th Congress.

The founding CPC members were concerned about the economic hardship imposed by the deepening recession and the growing inequality brought about by the timidity of the Democratic Party response in the early 1990s. On January 3, 1995 at a standing room only news conference on Capitol Hill, they were the first group inside Congress to chart a detailed, comprehensive legislative alternative to U.S. Speaker Newt Gingrich and the Republican Contract with America, which they termed "the most regressive tax proposals and reactionary social legislation the Congress had before it in 70 years". The CPC's ambitious agenda was framed as "The Progressive Promise: Fairness".

In April 2011, the Congressional Progressive Caucus released a proposed "People's Budget" for fiscal year 2012.[8] Two of its proponents stated: "By implementing a fair tax code, by building a resilient American economy, and by bringing our troops home, we achieve a budget surplus of over $30 billion by 2021 and we end up with a debt that is less than 65% of our GDP. This is what sustainability looks like".[9]

The CPC advocates "universal access to affordable, high quality healthcare" (universal healthcare or single-payer healthcare), fair trade agreements, living wage laws, the right of all workers to organize into labor unions and engage in collective bargaining, the abolition of the USA PATRIOT Act, the legalization of same-sex marriage, U.S. participation in international treaties such as the climate change related Kyoto Accords, strict campaign finance reform laws, a crackdown on corporate welfare and influence, an increase in income tax rates on upper-middle and upper class households, tax cuts for the poor and an increase in welfare spending by the federal government.[10] 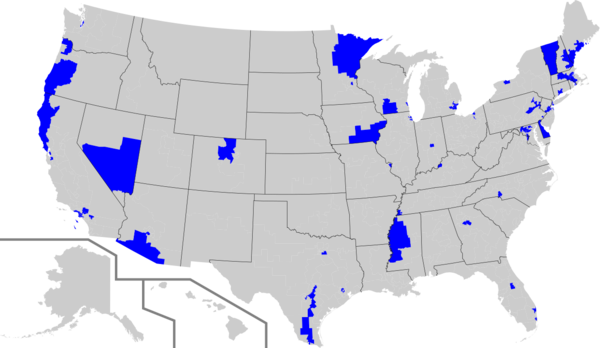 قالب:Ideological caucuses in the U.S. Congress