Situated directly north of Boston, across the Charles River, it was named in honor of the University of Cambridge in the United Kingdom, an important center of the Puritan theology embraced by the town's founders.[1]:18

Harvard University and the Massachusetts Institute of Technology (MIT), two of the world's most prestigious universities, are in Cambridge,[2] as was Radcliffe College, one of the leading colleges for women in the United States until it merged with Harvard.

According to the 2010 Census, the city's population was 105,162.[3] اعتبارا من يوليو 2014[تحديث], it was the fifth most populous city in the state, behind Boston, Worcester, Springfield and Lowell.[4] Cambridge was one of the two seats of Middlesex County until the abolition of county government in 1997; Lowell was the other.

Kendall Square in Cambridge has been called "the most innovative square mile on the planet", in reference to the high concentration of entrepreneurial start-ups and quality of innovation that have emerged there since 2010.[5][6] 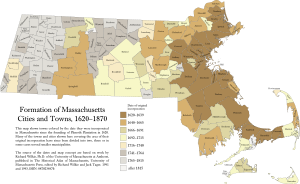 In December 1630 the site of what would become Cambridge was chosen because it was safely upriver from Boston Harbor, making it easily defensible from attacks by enemy ships. Thomas Dudley, his daughter Anne Bradstreet, and her husband Simon were among the town's first settlers. The first houses were built in the spring of 1631. The settlement was initially referred to as "the newe towne".[7][8] Official Massachusetts records show the name rendered as Newe Towne by 1632, and as Newtowne by 1638.[8][9] Located at the first convenient Charles River crossing west of Boston, Newe Towne was one of a number of towns (including Boston, Dorchester, Watertown, and Weymouth) founded by the 700 original Puritan colonists of the Massachusetts Bay Colony under Governor John Winthrop. Its first preacher was Thomas Hooker, who led many of its original inhabitants west to found the Connecticut Colony; before leaving, they sold their plots to more recent immigrants from England.[7] The original village site is in the heart of today's Harvard Square. The marketplace where farmers brought crops from surrounding towns to sell survives today as the small park at the corner of John F. Kennedy and Winthrop Streets, then at the edge of a salt marsh (since filled). The town comprised a much larger area than the present city,[7] with various outlying parts becoming independent towns over the years: Cambridge Village (later Newtown and now Newton) in 1688,[10] Cambridge Farms (now Lexington) in 1712[7] or 1713,[11] and Little or South Cambridge (now Brighton)[أ] and Menotomy or West Cambridge (now Arlington) in 1807.[7][12][ب] In the late 19th century, various schemes for annexing Cambridge to Boston were pursued and rejected.[13][14]

In 1636, the Newe College (later renamed Harvard College after benefactor John Harvard) was founded by the colony to train ministers. According to Cotton Mather, Newe Towne was chosen for the site of the college by the Great and General Court (the Massachusetts legislature) primarily for its proximity to the popular and highly respected Puritan preacher Thomas Shepard. In May 1638,[15][16] the settlement's name was changed to Cambridge in honor of the university in Cambridge, England.[7][17] Hooker and Shepard, Newtowne's ministers, and the college's first president, major benefactor, and first schoolmaster were all Cambridge alumni, as was the colony's governor John Winthrop. In 1629, Winthrop had led the signing of the founding document of the city of Boston, which was known as the Cambridge Agreement, after the university.[18] In 1650, Governor Thomas Dudley signed the charter creating the corporation that still governs Harvard College.[19][20] 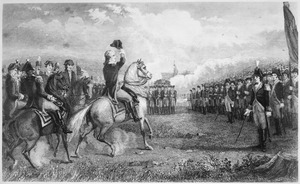 Cambridge grew slowly as an agricultural village ثمانية ميلs (13 kم) by road from Boston, the colony's capital. By the American Revolution, most residents lived near the Common and Harvard College, with most of the town comprising farms and estates. Most inhabitants were descendants of the original Puritan colonists, but there was also a small elite of Anglican "worthies" who were not involved in village life, made their livings from estates, investments, and trade, and lived in mansions along "the Road to Watertown" (today's Brattle Street, still known as Tory Row). Coming up from Virginia, George Washington took command of the volunteer American soldiers camped on Cambridge Common on July 3, 1775,[7] now reckoned the birthplace of the U.S. Army.[21] Most of the Tory estates were confiscated after the Revolution. On January 24, 1776, Henry Knox arrived with artillery captured from Fort Ticonderoga, which enabled Washington to drive the British army out of Boston. 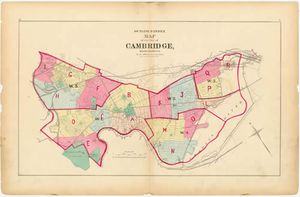 Between 1790 and 1840, Cambridge grew rapidly, with the construction of the West Boston Bridge in 1792 connecting Cambridge directly to Boston, so that it was no longer necessary to travel ثمانية ميلs (13 kم) through the Boston Neck, Roxbury, and Brookline to cross the Charles River. A second bridge, the Canal Bridge, opened in 1809 alongside the new Middlesex Canal. The new bridges and roads made what were formerly estates and marshland into prime industrial and residential districts.

In the mid-19th century, Cambridge was the center of a literary revolution. It was home to some of the famous Fireside Poets—so called because their poems would often be read aloud by families in front of their evening fires. The Fireside Poets—Henry Wadsworth Longfellow, James Russell Lowell, and Oliver Wendell Holmes—were highly popular and influential in their day.

Soon after, turnpikes were built: the Cambridge and Concord Turnpike (today's Broadway and Concord Ave.), the Middlesex Turnpike (Hampshire St. and Massachusetts Ave. northwest of Porter Square), and what are today's Cambridge, Main, and Harvard Streets connected various areas of Cambridge to the bridges. In addition, the town was connected to the Boston & Maine Railroad,[22] leading to the development of Porter Square as well as the creation of neighboring Somerville from the formerly rural parts of Charlestown.

1852 Map of Boston area showing Cambridge and regional rail lines and highlighting the course of the Middlesex Canal. Cambridge is toward the bottom of the map and outlined in yellow, and should not be confused with the pink-outlined and partially cropped "West Cambridge", now Arlington.

Cambridge was incorporated as a city in 1846[7] despite persistent tensions between East Cambridge, Cambridgeport, and Old Cambridge stemming from differences in culture, sources of income, and the national origins of the residents.[23] The city's commercial center began to shift from Harvard Square to Central Square, which became the city's downtown around this time. Between 1850 and 1900, Cambridge took on much of its present character—streetcar suburban development along the turnpikes, with working-class and industrial neighborhoods focused on East Cambridge, comfortable middle-class housing on the old Cambridgeport and Mid-Cambridge estates, and upper-class enclaves near Harvard University and on the minor hills. The coming of the railroad to North Cambridge and Northwest Cambridge led to three major changes: the development of massive brickyards and brickworks between Massachusetts Ave., Concord Ave. and Alewife Brook; the ice-cutting industry launched by Frederic Tudor on Fresh Pond; and the carving up of the last estates into residential subdivisions to house the thousands of immigrants who arrived to work in the new industries.

For many decades, the city's largest employer was the New England Glass Company, founded in 1818. By the middle of the 19th century it was the world's largest and most modern glassworks. In 1888, Edward Drummond Libbey moved all production to Toledo, Ohio, where it continues today under the name Owens Illinois. The company's flint glassware with heavy lead content is prized by antique glass collectors. There is none on public display in Cambridge, but the Toledo Museum of Art has a large collection. The Museum of Fine Arts, Boston and the Sandwich Glass Museum on Cape Cod also have a few pieces.

By 1920, Cambridge was one of New England's main industrial cities, with nearly 120,000 residents. Among the largest businesses in Cambridge during the period of industrialization was Carter's Ink Company, whose neon sign long adorned the Charles River and which was for many years the world's largest ink manufacturer. Next door was the Atheneum Press. Confectionery and snack manufacturers in the Cambridgeport-Area 4-Kendall corridor included the Kennedy Biscuit Factory (later part of Nabisco and originator of the Fig Newton),[24] Necco, Squirrel Brands[25]), George Close Company (1861–1930s),[26] Daggett Chocolate (1892–1960s, recipes bought by Necco),[27] Fox Cross Company (1920–1980, originator of the Charleston Chew, and now part of Tootsie Roll Industries),[28] Kendall Confectionery Company, and James O. Welch (1927–1963, originator of Junior Mints, Sugar Daddies, Sugar Mamas and Sugar Babies, now part of Tootsie Roll Industries).[29] Only the Cambridge Brands subsidiary of Tootsie Roll Industries remains in town, still manufacturing Junior Mints in the old Welch factory on Main Street.[29] The Blake and Knowles Steam Pump Company (1886), the Kendall Boiler and Tank Company (1880, now in Chelmsford, Massachusetts) and the New England Glass Company (1818–1878) were among the industrial manufacturers in what are now Kendall Square and East Cambridge.

As industry in New England began to decline during the Great Depression and after World War II, Cambridge lost much of its industrial base. It also began to become an intellectual, rather than an industrial, center. Harvard University had always been important as both a landowner and an institution, but it began to play a more dominant role in the city's life and culture. When Radcliffe College was established in 1879 the town became a mecca for some of the nation's most academically talented female students. The Massachusetts Institute of Technology's move from Boston in 1916 reinforced Cambridge's status as an intellectual center of the United States.

After the 1950s, the city's population began to decline slowly as families tended to be replaced by single people and young couples. The 1980s brought a wave of high-technology startups, creating software such as Visicalc and Lotus 1-2-3, and advanced computers, but many of these companies fell into decline with the fall of the minicomputer and DOS-based systems. The city continues to be home to many startups. Kendall Square was a major software hub through the dot-com boom and today hosts offices of such major technology companies as Google, Microsoft, Amazon, and Akamai (headquarters).

In 1976, Harvard's plans to start experiments with recombinant DNA led to a three-month moratorium and a citizen review panel. In the end, Cambridge decided to allow such experiments but passed safety regulations in 1977. This led to regulatory certainty and acceptance when Biogen opened a lab in 1982, in contrast to the hostility that caused the Genetic Institute (a Harvard spinoff) to abandon Somerville and Boston for Cambridge.[30] The biotech and pharmaceutical industries have since thrived in Cambridge, which now includes headquarters for Biogen and Genzyme; laboratories for Novartis, Teva, Takeda, Alnylam, Ironwood, Catabasis, Moderna Therapeutics, Editas Medicine; support companies such as Cytel; and many smaller companies.

By the end of the 20th century, Cambridge had one of the most expensive housing markets in the Northeastern United States.[31] While considerable class, race, and age diversity persisted, it became harder for those who grew up in the city to afford to stay. The end of rent control in 1994 prompted many Cambridge renters to move to more affordable housing in Somerville and other communities.

Until recently, Cambridge's mix of amenities and proximity to Boston kept housing prices relatively stable despite the bursting of the United States housing bubble.[32] Cambridge has been a sanctuary city since 1985 and reaffirmed its status as such in 2006.[33][34] 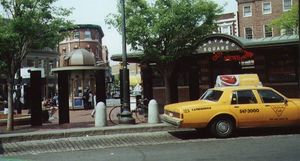 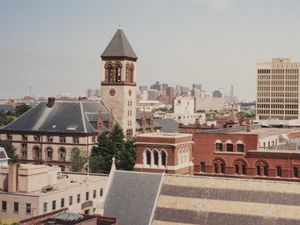 Cambridge City Hall in the 1980s 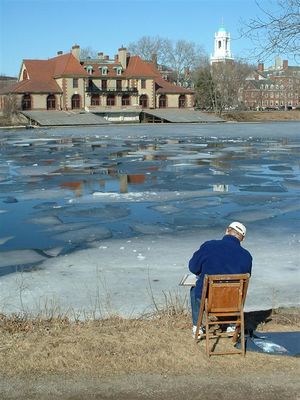 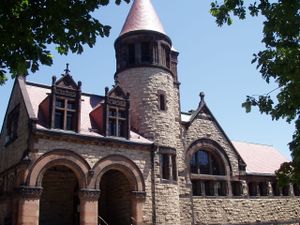