The flag of the United States of America, often referred to as the American flag or the U.S. flag, is the national flag of the United States. It consists of thirteen equal horizontal stripes of red (top and bottom) alternating with white, with a blue rectangle in the canton (referred to specifically as the "union") bearing fifty small, white, five-pointed stars arranged in nine offset horizontal rows, where rows of six stars (top and bottom) alternate with rows of five stars. The 50 stars on the flag represent the 50 states of the United States of America, and the 13 stripes represent the thirteen British colonies that declared independence from the Kingdom of Great Britain, and became the first states in the U.S.[2] Nicknames for the flag include the Stars and Stripes,[3][4] Old Glory,[5] and the Star-Spangled Banner.

انظر أيضاً: Timeline of the flag of the United States

At the time of the Declaration of Independence in July 1776, the Continental Congress would not legally adopt flags with "stars, white in a blue field" for another year. The flag contemporaneously known as "the Continental Colors" has historically been referred to as the first national flag.[7]

The Continental Navy raised the Colors as the ensign of the fledgling nation in the American War for Independence—likely with the expedient of transforming their previous British red ensigns by adding white stripes—and used this flag until 1777, when it formed the basis for the subsequent designs.[7][8]

The name "Grand Union" was first applied to the Continental Colors by George Preble in his 1872 history of the U.S. flag.[8]

The flag closely resembles the British East India Company flag of the era, and Sir Charles Fawcett argued in 1937 that the company flag inspired the design.[9] Both flags could have been easily constructed by adding white stripes to a British Red Ensign, one of the three maritime flags used throughout the British Empire at the time. However, an East India Company flag could have from nine to 13 stripes and was not allowed to be flown outside the Indian Ocean.[10] Benjamin Franklin once gave a speech endorsing the adoption of the company's flag by the United States as their national flag. He said to George Washington, "While the field of your flag must be new in the details of its design, it need not be entirely new in its elements. There is already in use a flag, I refer to the flag of the East India Company."[11] This was a way of symbolizing American loyalty to the Crown as well as the United States' aspirations to be self-governing, as was the East India Company. Some colonists also felt that the company could be a powerful ally in the American War of Independence, as they shared similar aims and grievances against the British government tax policies. Colonists, therefore, flew the company's flag, to endorse the company.[12]

However, the theory that the Grand Union Flag was a direct descendant of the flag of the East India Company has been criticized as lacking written evidence.[13] On the other hand, the resemblance is obvious, and a number of the Founding Fathers of the United States were aware of the East India Company's activities and of their free administration of India under Company rule.[13] In any case, both the stripes (barry) and the stars (mullets) have precedents in classical heraldry. Mullets were comparatively rare in early modern heraldry, but an example of mullets representing territorial divisions predating the U.S. flag are those in the coat of arms of Valais of 1618, where seven mullets stood for seven districts.

Another widely repeated theory is that the design was inspired by the coat of arms of George Washington's family, which includes three red stars over two horizontal red bars on a white field.[14] Despite the similar visual elements, there is "little evidence"[15] or "no evidence whatsoever"[16] to support the claimed connection with the flag design. The Digital Encyclopedia of George Washington, published by the Fred W. Smith National Library for the Study of George Washington at Mount Vernon, calls it an "enduring myth" backed by "no discernible evidence."[17] The story seems to have originated with the 1876 play Washington: A Drama in Five Acts, by the English poet Martin Farquhar Tupper, and was further popularized through repetition in the children's magazine St. Nicholas.[15][16]

المقالة الرئيسية: History of the flags of the United States
انظر أيضاً: List of U.S. states by date of admission to the Union

In the following table depicting the 28 various designs of the United States flag, the star patterns for the flags are merely the usual patterns, often associated with the United States Navy. Canton designs, prior to the proclamation of the 48-star flag, had no official arrangement of the stars. Furthermore, the exact colors of the flag were not standardized until 1934.[18][مطلوب مصدر أفضل]

Possible future design of the flag 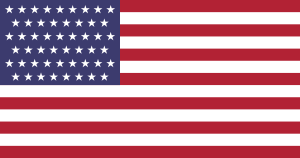 51-star flags have been designed and used as a symbol by supporters of statehood in various areas. Above is one possible design for a 51-star flag. It has 6 rows of alternating 9 and 8 stars. 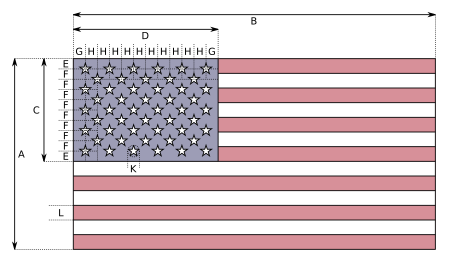 The basic design of the current flag is specified by 4 U.S.C. § 1; 4 U.S.C. § 2 outlines the addition of new stars to represent new states, with no distinction made for the shape, size, or arrangement of the stars. Specifications for federal government use adhere to the following values:[20]

The exact red, white, and blue colors to be used in the flag are specified with reference to the CAUS Standard Color Reference of America, 10th edition. Specifically, the colors are "White", "Old Glory Red", and "Old Glory Blue".[24] The CIE coordinates for the colors of the 9th edition of the Standard Color Card were formally specified in JOSA in 1946.[25] These colors form the standard for cloth, and there is no perfect way to convert them to RGB for display on screen or CMYK for printing. The "relative" coordinates in the following table were found by scaling the luminous reflectance relative to the flag's white.

Though not part of the official Flag Code, according to military custom, flags should be folded into a triangular shape when not in use. To properly fold the flag:

There is also no specific meaning for each fold of the flag. However, there are scripts read by non-government organizations and also by the Air Force that are used during the flag folding ceremony. These scripts range from historical timelines of the flag to religious themes.[27][28] 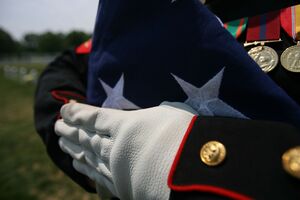 A flag prepared for presentation to the next of kin