Shaanxi covers an area of over 205,000 km2 (2.206601635425×1012 قدم2) with about 37 million people, the 16th highest in China. Xi'an – which includes the sites of the former Chinese capitals Fenghao and Chang'an – is the provincial capital as well as the largest city in Northwest China[5] and also one of the oldest cities in China and the oldest of the Four Great Ancient Capitals, being the capital for the Western Zhou, Western Han, Jin, Sui and Tang dynasties.[6] Xianyang, which served as the Qin dynasty capital, is just north across Wei River. The other prefecture-level cities into which the province is divided are Ankang, Baoji, Hanzhong, Shangluo, Tongchuan, Weinan, Yan'an and Yulin.

Shaanxi is geographically divided into three parts, namely Northern, Central and Southern Shaanxi. Northern Shaanxi (or "Shaanbei") makes up the southeastern portion of the Ordos Basin, and mainly comprises the two prefectural cities of Yulin and Yan'an on the northern Loess Plateau, demarcated from the Ordos Desert and the grasslands of Inner Mongolia's Ordos City by the Ming Great Wall. Central Shaanxi (or "Shaanzhong") is also known as the Guanzhong region, and comprises the drainage basin of lower Wei River east of Mount Long and north of the Qinling Mountains, where the majority of Shaanxi's population reside. Southern Shaanxi (or "Shaannan") comprises of the three prefectural cities in the edge of the historical Bashu region south of the Qinling Mountains, and includes the three mountainous cities of Hanzhong, Ankang and Shangluo. Along with areas of adjacent Shanxi and Henan provinces, it formed the cradle of Chinese civilization.

The vast majority of the population of Shaanxi is Han Chinese. Mandarin is mainly spoken in Shaanxi, including Zhongyuan Mandarin and Southwestern Mandarin; another variety of Chinese, Jin, is also spoken.

Shaanxi is China's 15th largest economy, ranking within the middle among China's administrative divisions. The fossil fuel and high technology sectors compose the two largest industries in Shaanxi Province. The high technology sector includes aircraft and aerospace industries, and Shaanxi produces more than 50% of the R&D and manufacturing equipment for the country's domestic commercial aviation industry.[7]

The name "Shaanxi" is an irregular romanization of the Mandarin pronunciation of the Chinese name 陕西, meaning "[Land] West of the Shan Pass". This pass in Henan, now part of Sanmenxia's Shanzhou District, was considered to be the place where the Yellow River left the Loess Plateau and entered the North China Plain.

Because the Mandarin pronunciation of Shaanxi and its eastern neighbor Shanxi differs only in tone, their spelling in pinyin romanization differs only by tone marks (Shǎnxī and Shānxī, respectively). The People's Republic of China therefore adopted the special official spelling "Shaanxi". The first syllable is derived from Gwoyeu Romatzyh romanization[بحاجة لمصدر], which reflects the tones of the words' vowels in their spelling.[8] Before the adoption of pinyin, Shaanxi was romanized as Shensi in the Chinese postal romanization scheme. When tone marks are noted, it is spelled Shǎnxī rather than Shǎanxī or Shaǎnxī.

The Shaanxi–Shanxi ambiguity only occurs in Mandarin and other northern varieties of Chinese that have lost the -m syllable ending. In Cantonese, for example, the two provinces' names are Sím-sāi and Sāan-sāi, and in Hokkien they are Siám-sai and Soaⁿ-sai.

The name first appeared as a lu (circuit) established by the Song dynasty in 997.[9]

Shaanxi is considered one of the cradles of Chinese civilization. Thirteen feudal dynasties established their capitals in the province during a span of more than 1,100 years, from the Zhou dynasty to the Tang dynasty.

The province's principal city and current capital, Xi'an, is one of the four great ancient capitals of China and is the eastern terminus of the Silk Road, which leads to Europe, the Arabian Peninsula and Africa.

Under the Han dynasty, the Northern Silk Road was expanded to advance exploration and military purposes to the west. This Northern Silk Road is the northernmost of the Silk Roads and is about 2,600 kiloمترs (1,600 ميل) in length. It connected the ancient Chinese capital of Xi'an to the west over the Wushao Ling Pass to Wuwei and emerging in Kashgar before linking to ancient Parthia.[10]

Under the Ming dynasty, Shaanxi was established with the founding of the Saanxi Provincial Administration Commission in 1376, whose administration also included the modern provinces of Gansu, Ningxia, and part of Qinghai.[9]

One of the most devastating earthquakes in history occurred near Hua Shan, in south-eastern part of Shaanxi Province on January 23, 1556, killing an estimated 830,000 people (see 1556 Shaanxi earthquake).

After the founding of the Qing dynasty, Gansu was split from Shaanxi, but both provinces were governed under the Viceroy of Shaan-Gan.

The end of the short-lived Jiangxi Soviet signaled the beginning of the Long March by Mao Zedong and the Chinese Communists to the Shaanxi Soviet at Yan'an.

The Lantian Man site, with hominin fossils of one million years ago, was found in Lantian County in northwestern Shaanxi province, near the city of Xi'an. Scientists classify Lantian Man as a subspecies of Homo erectus. The fossils are displayed at the Shaanxi History Museum, Xi'an, China.

The geography of the area is described as being part of the Ordos Desert in the north along the border with Inner Mongolia, the Loess Plateau in the central part of the province, the Qin Mountains (Qinling) running east to west in the south central part, and subtropical climate south of the Qinling. In between the Loess Plateau and the Qinling lies the Wei River Valley, or Guanzhong, a cradle of early Chinese civilization.

Due to its large span in latitude, Shaanxi has a variety of climates. Under the Köppen climate classification, the northern parts, including the Loess Plateau, have either a cold arid (Köppen BWk) or cold semi-arid (Köppen BSk), with cold and very dry winters, dry springs and autumns, and hot summers. The area known as Guanzhong is mostly semi-arid, though there are a few areas with a humid subtropical climate (Köppen Cwa), with cool to cold winters, and hot, humid summers that often see early-season heatwaves. The southern portion is much more humid and lies in the humid subtropical zone, with more temperate winters and long, hot, humid summers. Annual mean temperature is roughly between 8 to 16 °م (46 to 61 °ف), with January temperatures ranging from −11 to 3.5 °م (12.2 to 38.3 °ف) and July temperatures ranging from 21 to 28 °م (70 to 82 °ف).

Besides the provincial capital of Xi'an, other cities include: Baoji, Hanzhong, Lintong, Tongchuan, Xianyang, Yan'an and Ankang.

Shaanxi consists of nine prefecture-level cities and one sub-provincial city:

Nearly all the people in Shaanxi are ethnic Han Chinese, with pockets of Hui population in the northwestern region (adjacent to Ningxia). Shaanxi province is one of the centers of ancient Chinese civilization. The southern part of Shaanxi, known as Guanzhong, where the provincial capital Xi'an is located, is more populated compared to the northern part. 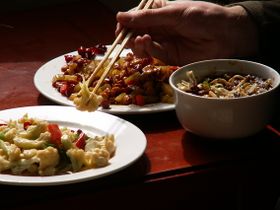 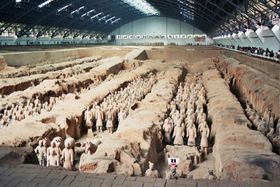