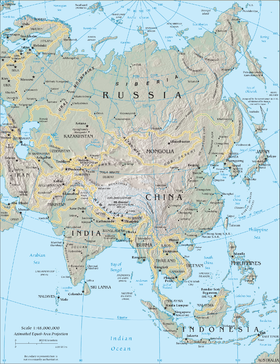 Asia is the central and eastern part of أوراسيا, comprising approximately fifty countries. It has an area, including islands, of roughly 49,694,700 km². Asia is joined to Africa by the Isthmus of السويس and to Europe by a long border generally following the جبال الأورال.

Medieval Europeans considered Asia as a قارة, a distinct landmass. The European concept of the three continents in the العالم القديم goes back to classical antiquity with the علم تاريخ الألفاظ of the word rooted in the ancient Near and الشرق الأوسط. The demarcation between Asia and أفريقيا is the isthmus of السويس and the البحر الأحمر. The boundary between Asia and Europe is commonly believed to run through the الدردنيل, the Sea of Marmara, the Bosporus, the Black Sea, the Caucasus Mountains, the Caspian Sea, the Ural River to its source, and the Ural Mountains to the Kara Sea near Kara, روسيا. However, modern discovery of the extent of Africa and Asia made this definition rather anachronistic, especially in the case of Asia, which would have several regions that would be considered distinct landmasses if these criteria were used (for example, South Asia and East Asia).

Geologists and physical geographers no longer consider Europe and Asia to be separate continents. It is either defined in terms of geological landmasses (physical geography) or tectonic plates (geology). In the former case, Europe is a western peninsula of أوراسيا or the Africa-Eurasia landmass. In the latter, Europe and Asia are parts of the Eurasian plate, which excludes the Arabian and Indian tectonic plates.

In human geography, there are two schools of thought. One school follows historical convention and treats Europe and Asia as different continents, categorizing Europe, East Asia (the Orient), South Asia (British India), and the Middle East (Arabia and Persia) as specific regions for more detailed analysis. The other schools equate the word "continent" in terms of geographical region when referring to Europe, and use the term "region" to describe Asia in terms of physical geography. It is becoming increasingly common to substitute the term "region" for "continent" because in linguistic terms, "continent" implies a distinct landmass.

There is much confusion in European languages with the term "Asian", which almost always refers to a subcategory of people from Asia rather than referring to "Asian" defined in term of "Asia", because a category implies homogeneity. In American English, Asian refers to East Asians, while in British English, Asian refers to South Asians. Some definitions of Asia exclude Turkey, the Middle East, or Russia. The term is sometimes used more strictly in reference to Asia Pacific, which does not include the Middle East or Russia, but does include islands in the Pacific Ocean — many of which are considered part of Australasia or Oceania. Asia contains the Indian subcontinent, Arabian peninsula, as well as a piece of the North American plate in Siberia.

المقالة الرئيسية: [[:List of islaND (3,117 ft.), the highest of any in the world. The plateau and mountainous areas broadly sweep SW-NW across Asia, climaxing in the high Tibetan Plateau, rising to the highest peaks in the world in the Himalayas. To the northwest lie plains, while to the south lie the geologically distinct areas of the Arabian Peninsula, Indian subcontinent and Malay Peninsula. Large numbers of islands lie southeast of the continent.

Besides its mainland, Asia includes a large number of islands, including some of the world's largest islands, such as Borneo and Sumatra, and some of the world's most populous islands, such as جاوة and Honshū. Other prominent islands include Bali, Madura and Sulawesi of إندونسيا; Hokkaidō, Shikoku, Kyūshū and Okinawa of اليابان; the Andaman and Nicobar of الهند; Luzon and Mindanao of the الفلپين; Ko Pha Ngan and Ko Samui of تايلاند; as well as سريلانكا, Maldives, سنغافورة, Hong Kong Island and Sakhalin.

The nations of Indonesia, Brunei, East Timor, Singapore, Japan, Philippines, Taiwan, Sri Lanka, Maldives and Cyprus are solely made up of one or more islands, and have no territory on the mainland.

¹ If the Cocos (Keeling) Islands are included as part of Asia, then South Island (12°04'S) is the southernmost point

³ According to the International Date Line 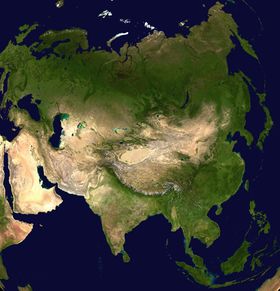 Asia is a subregion of أوراسيا. For further subdivisions based on that term, see أوراسيا الشمالية and Central Eurasia.

Central Asia is currently geopolitically important because international disputes and conflicts over oil pipelines, Nagorno-Karabakh, and Chechnya, as well as the presence of U.S. and U.K. military forces in Afghanistan.

More informally, Southeast Asia is included in East Asia on some occasions.

This term is rarely used by geographers, but usually it refers to the larger Asian part of Russia, also known as Siberia. Sometimes the northern parts of other Asian nations, such as Kazakhstan or Mongolia, are also included in North Asia. The term "Northern Eurasia" is sometimes used as an apolitical term that includes all the nations of the former U.S.S.R.

This region contains the Malay Peninsula, Indochina and islands in the المحيط الهندي and المحيط الهادي. The countries it contains are:

Malaysia is divided in two by the بحر الصين الجنوبي, and thus has both a mainland and an island part.