Malta's prehistory ends in around 700 BC, when the islands were colonized by the Phoenicians. They ruled the islands until they fell to the Roman Republic in 218 BC. The island was acquired by the Eastern Romans or Byzantines in the 6th century AD, who were expelled by Aghlabids following a siege in 870 AD. Malta may have been sparsely populated for a few centuries until being repopulated by Arabs in the 11th century. The islands were invaded by the Norman County of Sicily in 1091, and a gradual Christianization of the islands followed. At this point, the islands became part of the Kingdom of Sicily and were dominated by successive feudal rulers including the Swabians, the Aragonese and eventually the Spanish.

The islands were given to the Order of St. John in 1530, who ruled them as a vassal state of Sicily. In 1565, the Ottoman Empire attempted to take the islands in the Great Siege of Malta, but the invasion was repelled. The Order continued to rule Malta for over two centuries, and this period was characterized by a flourishing of the arts and architecture and an overall improvement in society. The Order was expelled after the French First Republic invaded the islands in 1798, marking the beginning of the French occupation of Malta.

After a few months of French rule, the Maltese rebelled and the French were expelled in 1800 with British, Neapolitan and Portuguese assistance. Malta subsequently became a British protectorate, becoming a de facto colony in 1813. This was confirmed by the Treaty of Paris a year later. The islands became an important naval base for the British, serving as the headquarters of the Mediterranean Fleet. Due to this, Malta was attacked by the Axis powers during World War II, and in 1942 the island was awarded the George Cross, which today appears on Malta's flag and coat of arms. The Crown Colony of Malta was self-governing from 1921–33, 1947–58 and 1962–64.

Malta became independent as a Commonwealth realm known as the دولة مالطا في 1964، and it became a republic in 1974. Since 2004, the country has been a member state of the European Union.

Malta stands on an underwater ridge that extends from North Africa to Sicily. At some time in the distant past Malta was submerged, as shown by marine fossils embedded in rock in the highest points of Malta. As the ridge was pushed up and the Strait of Gibraltar closed through tectonic activity, the sea level was lower, and Malta was on a bridge of dry land that extended between the two continents, surrounded by large lakes. Some caverns in Malta have revealed bones of elephants, hippopotami, and other large animals now found in Africa, while others have revealed animals native to Europe. 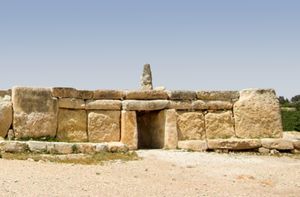 The megalithic temple of Ħaġar Qim 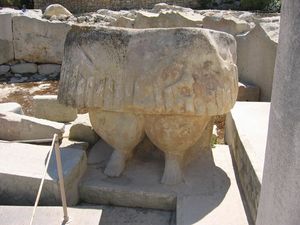 One of the so-called "fat ladies" of ancient Malta, at the Tarxien Temples 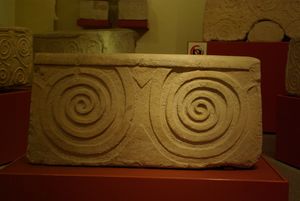 Spiral motif from one of the megalithic temples, now at the National Museum of Archaeology

People first arrived in Malta around 5200 BC. These first Neolithic people probably arrived from Sicily (about 100 kiloمترs or 62 ميلs north), and were mainly farming and fishing communities, with some evidence of hunting activities. They apparently lived in caves and open dwellings. During the centuries that followed there is evidence of further contacts with other cultures, which left their influence on the local communities, evidenced by their pottery designs and colours.

One of the most notable periods of Malta's history is the temple period, starting around 3600 BC. The Ġgantija Temple in Gozo is one of the oldest free-standing buildings in the world. The name of the complex stems from the Maltese word ġgant, which reflects the magnitude of the temple's size. Many of the temples are in the form of five semicircular rooms connected at the centre. It has been suggested that these might have represented the head, arms and legs of a deity, since one of the commonest kinds of statue found in these temples is a fat woman — a symbol of fertility. The Temple period lasted until about 2500 BC, at which point the civilization that raised these huge monoliths seems to have disappeared. There is much speculation about what might have happened and whether they were completely wiped out or assimilated.

After the Temple period came the Bronze Age. From this period there are remains of a number of settlements and villages, as well as dolmens — altar-like structures made out of very large slabs of stone. They are claimed to belong to a population certainly different from that which built the previous megalithic temples. It is presumed the population arrived from Sicily because of the similarity to the constructions found in the largest island of the Mediterranean sea.[1] One surviving menhir, which was used to build temples, still stands at Kirkop; it is one of the few still in good condition. Among the most interesting and mysterious remnants of this era are the so-called cart ruts as they can be seen at a place on Malta called Clapham Junction. These are pairs of parallel channels cut into the surface of the rock, and extending for considerable distances, often in an exactly straight line. Their exact use is unknown. One suggestion is that beasts of burden used to pull carts along, and these channels would guide the carts and prevent the animals from straying. The society that built these structures eventually died out or at any rate disappeared. 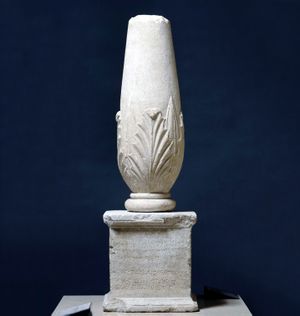 One of the Cippi of Melqart which were discovered in Malta

Phoenicians possibly from Tyre began to colonize the islands in approximately the 8th century BC as an outpost from which they expanded sea explorations and trade in the Mediterranean. Phoenician tombs have been found in Rabat, Malta and the town of the same name on Gozo, which suggest that the main urban centres at the time were present-day Mdina on Malta and the Cittadella on Gozo.[2] The former settlement was known as Maleth meaning safe haven, and the whole island began to be referred to by that name.

The Maltese Islands fell under the hegemony of Carthage in around the 6th century BC, along with most other Phoenician colonies in the western Mediterranean. By the late 4th century BC, Malta had become a trading post linking southern Italy and Sicily to Tripolitania. This resulted in the introduction of Hellenistic features in architecture and pottery, although Malta was never a Greek colony.[3] Hellenistic architectural features can be seen in the Punic temple at Tas-Silġ and a tower in Żurrieq. The Greek language also began to be used in Malta, as evidenced by the bilingual Phoenician and Greek inscriptions found on the Cippi of Melqart. In the 18th century, French scholar Jean-Jacques Barthélemy deciphered the extinct Phoenician alphabet using the inscriptions on these cippi.[2]

In 255 BC, the Romans raided Malta during the First Punic War, devastating much of the island.[2] 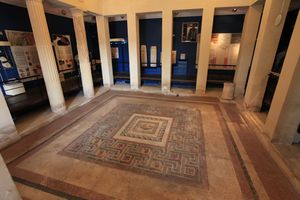 Roman mosaics in the Domvs Romana of ancient Melite

According to Latin historian Livy, the Maltese Islands passed into the hands of the Romans at the start of the Second Punic War in the year 218 BC. As written by Livy, the commander of the Punic garrison on the Island surrendered without resistance to Tiberius Sempronius Longus, one of the two consuls for that year who was on his way to North Africa. The archipelago was part of the province of Sicily, but by the 1st century AD it had its own senate and people's assembly. By this time, both Malta and Gozo minted distinctive coins based on Roman weight measurements.[4]

In the Roman period, the Punic city of Maleth became known as Melite, and it became the administrative hub of the Island. Its size grew to its maximum extent, occupying the entire area of present-day Mdina and large parts of Rabat, extending to what is now the church of St Paul. Remains show that the city was surrounded by thick defensive walls and was also protected by a protective ditch that ran along the same line of St Rita Street, which was built directly above it. Remains hint that a religious centre with a number of temples was built on the highest part of the promontory. The remains of one impressive residence known as the Domvs Romana have been excavated, revealing well preserved Pompeian style mosaics. This domus seems to have been the residence of a rich Roman aristocrat, and it is believed to have been built in the 1st century BC and abandoned in the 2nd century AD.[5] 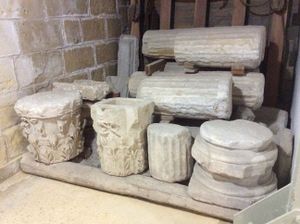 The islands prospered under Roman rule, and were eventually distinguished as a Municipium and a Foederata Civitas. Many Roman antiquities still exist, testifying to the close link between the Maltese inhabitants and Sicily.[6] Throughout the period of Roman rule, Latin became Malta's official language, and Roman religion was introduced in the islands. Despite this, the local Punic-Hellenistic culture and language is thought to have survived until at least the 1st century AD.[4] 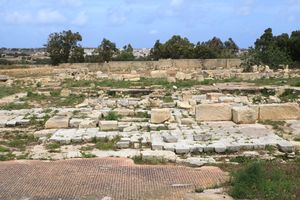 Remains of a Byzantine monastery at Tas-Silġ, which was built on the site of earlier megalithic and Punic-Roman temples 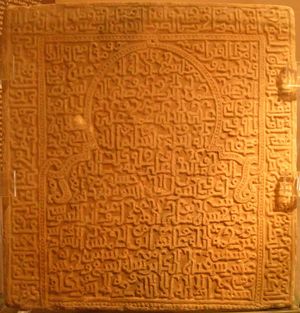 حجر ميمونة, a 12th-century marble tombstone believed to have been found in Gozo 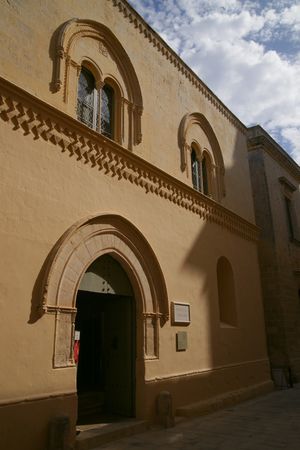 Palazzo Falson, which was built between the late 15th and mid 16th centuries. It is the second oldest surviving building in Mdina.

Between 1194 and 1530, the Kingdom of Sicily ruled the Maltese islands and a process of full latinisation started in Malta. 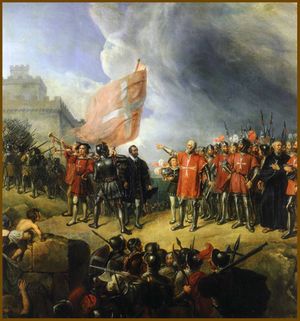 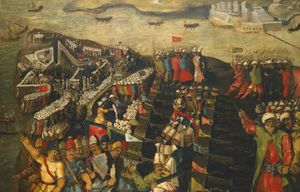 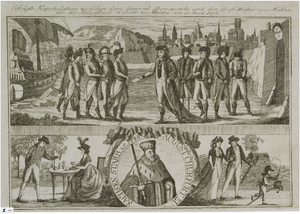 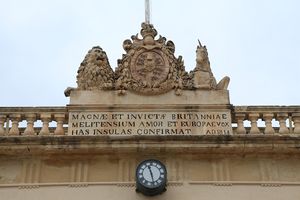 The British coat of arms on the Main Guard building في ڤالـِتـّا. 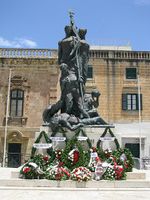 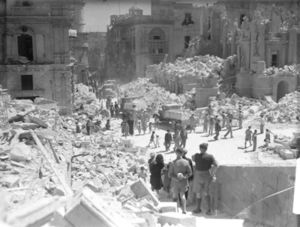 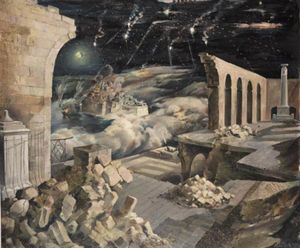 The bomb-damaged Upper Barrakka Gardens in 1943 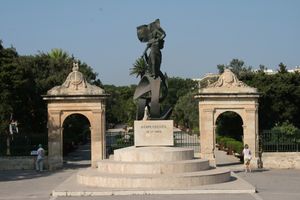 Monument to the independence of Malta in Floriana 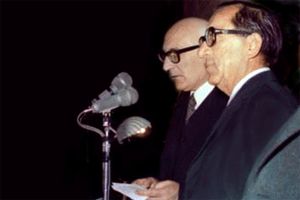 President Anthony Mamo and Prime Minister Dom Mintoff at the proclamation of the Republic of Malta, 13 December 1974 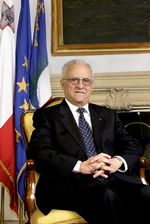