U.S. relations with Vietnam have become deeper and more diverse in the years since political normalization. The two countries have broadened their political exchanges through regular and regional security. The annual Bilateral Human Rights Dialogue resumed in 2006 after a two-year hiatus. They signed a Bilateral Trade Agreement in July 2000, which went into force in December 2001. In 2003, the two countries signed a Counternarcotics Letter of Agreement (amended in 2006), a Civil Aviation Agreement, and a textile agreement. In January 2007, Congress approved Permanent Normal Trade Relations (PNTR) for Vietnam. 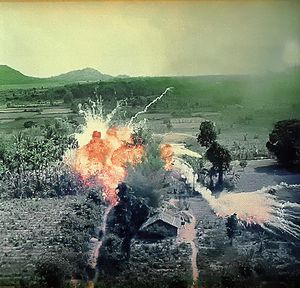 The Cham Muslim human rights activist Musa Porome and his daughter Khaleelah Porome live in America and advocate for Cham rights against the Vietnamese government, often going to Washington DC to lobby Congress against Vietnamese human rights violations. According to the Cham advocacy group International Office of Champa (IOC-Champa) and Cham Muslim activist Khaleelah Porome, both Hindu and Muslim Chams have experienced religious and ethnic persecution and restrictions on their faith under the current Vietnamese government, with the Vietnamese state confiscating Cham property and forbidding Cham from observing their religious beliefs. Hindu temples were turned into tourist sites against the wishes of the Cham Hindus. In 2010 and 2013 several incidents occurred in Thành Tín and Phươc Nhơn villages where Cham were murdered by Vietnamese. In 2012, Vietnamese police in Chau Giang village stormed into a Cham Mosque, stole the electric generator, and also raped Cham girls.[6] Cham Muslims in the Mekong Delta have also been economically marginalized, with ethnic Vietnamese settling on land previously owned by Cham people with state support.[7]

A Cambodian Cham Muslim dissident, Hassan A Kasem, a former military helicopter pilot who was both persecuted and imprisoned by the Khmer Rouge and fought against Vietnamese invasion, denounced Vietnam as trying to position itself as the savior of Cambodia from Khmer Rouge rule and wrote that Vietnam has deceived the west into thinking of it as a "magnanimous liberator" when it invaded Cambodia and ousted the Khmer Rouge when in fact Vietnam used the war to benefit its own interests such subjecting Cambodian financial assets and national treasures to pillaging and theft, settling border disputes to its own advantage, trying to destroy Cambodian nationalist feeling against Vietnam, benefiting from the mostly Khmer on Khmer violence by the Khmer Rouge and setting up its own Communist puppet government to rule Cambodia, the Cambodia People's Party (CPP) with Vietnamese soldiers secretly remaining behind in Vietnam to prop up the puppet government and Vietnamese officials pretending to be Khmer continuing to direct the government as their puppet.[8] The Cham activist organization "International Office of Champa" republished Hassan's article on their website Cham Today.[9]

According to a National Geographic article published by journalist Adam Bray, Vietnamese government fears that evidence of Champa's influence over the disputed area in the South China Sea would bring attention to human rights violations and killings of ethnic minorities in Vietnam such as in the 2001 and 2004 uprisings, and lead to the issue of Cham autonomy being brought into the dispute, since the Vietnamese conquered Cham people in a war in 1832, and the Vietnamese continue to destroy evidence of Cham culture and artifacts left behind, plundering or building on top of Cham temples, building farms over them, banning Cham religious practices, and omitting references to the destroyed Cham capital of Song Luy in the 1832 invasion in history books and tourist guides. The situation of Cham compared to ethnic Vietnamese is substandard, lacking water and electricity and living in houses made out of mud.[10] The Cham activist organization "International Office of Champa" republished Bray's article on their website Cham Today.[11] 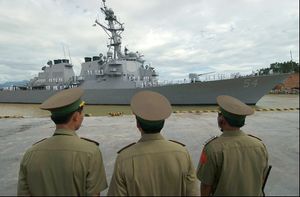 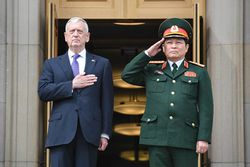