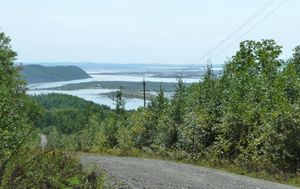 Historically, it was common to refer to a river simply as "water." There are similar words for "water" or "river" in a number of Asiatic languages: e.g. 물 mul ("water") in Korean, muren or mörön ("river") in Mongolian, and 水 midu > mizu ("water") in Japanese. The name "Amur" may have evolved from a root word for water, coupled with a size modifier for "Big Water".[2]

The river rises in the hills in the western part of Northeast China at the confluence of its two major affluents, the Shilka and the Argun (or Ergune), at an elevation of 303 مترs (994 قدم).[5] It flows east forming the border between China and Russia, and slowly makes a great arc to the southeast for about 400 kiloمترs (250 ميل), receiving many tributaries and passing many small towns. At Huma, it is joined by a major tributary, the Huma He. Afterwards it continues to flow south until, between the cities of Blagoveshchensk in Russia and Heihe in China, it widens significantly as it is joined by one of its most important tributaries the Zeya.

The Amur arcs to the east and turns southeast again at the confluence with the Bureya, then does not receive another significant tributary for nearly 250 kiloمترs (160 ميل) before its confluence with its largest tributary, the Songhua, at Tongjiang. At the confluence with the Songhua the river turns northeast, now flowing towards Khabarovsk, where it joins the Ussuri and ceases to define the Russia–China border. Now the river spreads out dramatically into a braided character, flowing north-northeast through a wide valley in eastern Russia, passing Amursk and Komsomolsk-on-Amur. The valley narrows after about 200 kiloمترs (120 ميل) and the river again flows north onto plains at the confluence with the Amgun. Shortly after, the Amur turns sharply east and into an estuary at Nikolayevsk-on-Amur, about 20 kiloمترs (12 ميل) downstream of which it flows into the Strait of Tartary.

The largest tributaries of the Amur are, from source to mouth:[6][7]

Many historical references distinguish two geopolitical entities in the area of the Amur: Outer Manchuria (Russian Manchuria) and Inner Manchuria (northeast China). The Chinese province of Heilongjiang on the south bank of the river takes its name from the river, as does the Russian Amur Oblast on the north bank. The native Manchu people and their Qing Empire of China, who regarded this river as sacred, use the name sahaliyan ula (Black River).

The Amur is an important symbol of, and geopolitical factor in, Chinese–Russian relations. The Amur became especially prominent in the period of the Sino–Soviet political split of 1956-1966.[بحاجة لمصدر]

For many[كمية] centuries inhabitants of the Amur Valley comprised the Tungusic (Evenki, Solon, Ducher, Jurchen, Nanai, Ulch), Mongol (Daur) people, some Ainu and, near its mouth, the Nivkhs.[8] For many of these groups, fishing in the Amur and its tributaries was the main source of their livelihood. Until the 17th century these peoples were not known to Europeans, and little known to the Han Chinese, who sometimes collectively described them as the Wild Jurchens. The Chinese-language term Yúpí Dázi 魚皮韃子 ("Fish-skin Tatars") came to apply to the Nanais and related groups as well, owing to their traditional clothes made of fish skins. 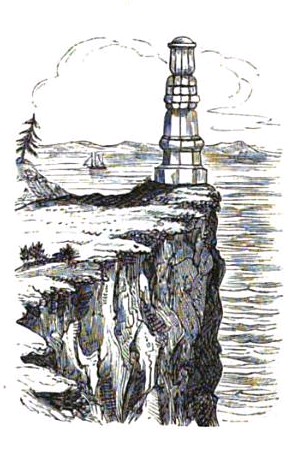 The Mongols, ruling the region as the Yuan dynasty, established a tenuous military presence on the lower Amur in the 13th and14th centuries; ruins of a Yuan-era temple have been excavated near the village of Tyr.[9]

During the reigns of the Yongle and Xuande Emperors (early-15th century), the Ming dynasty reached the Amur in their drive to establish control over the lands adjacent to the Ming Empire to the northeast, which would later become known as Manchuria. Expeditions headed by the eunuch Yishiha reached Tyr several times between 1411 and the early 1430s, re-building (twice) the Yongning Temple and obtaining at least the nominal allegiance of the lower Amur's tribes to the Ming government.[10][11] Some sources report also a Chinese presence during the same period on the middle Amur – a fort existed at Aigun for about 20 years during the Yongle era on the left (northwestern) shore of the Amur downstream from the mouth of the Zeya River. This Ming Dynasty Aigun was located on the opposite bank to the later Aigun that was later relocated during the Qing Dynasty.[12] In any event, the Ming presence on the Amur was as short-lived as it was tenuous; soon after the end of the Yongle era, the Ming dynasty's frontiers retreated to southern Manchuria.[بحاجة لمصدر] 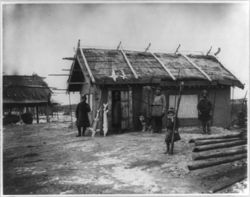 Goldi village along the Amur, north of Khabarovsk, 1895 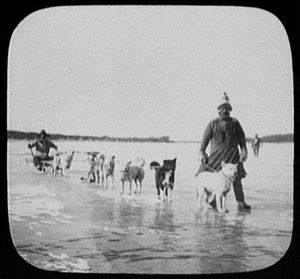 Chinese cultural and religious influence such as Chinese New Year, the "Chinese god", Chinese motifs like the dragon, spirals, scrolls, and material goods like agriculture, husbandry, heating, iron cooking-pots, silk, and cotton spread among Amur natives such as the Udeghes, Ulchis, and Nanais.[13]

Russian Cossack expeditions led by Vassili Poyarkov and Yerofey Khabarov explored the Amur and its tributaries in 1643–44 and 1649–51, respectively. The Cossacks established the fort of Albazin on the upper Amur, at the site of the former capital of the Solons. 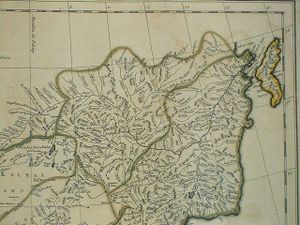 The Amur (under its Manchu name, Saghalien Oula) and its tributaries on a 1734 map by Jean Baptiste Bourguignon d'Anville, based upon maps of Jesuits in China. Albazin is shown as Jaxa, the old (Ming) site of Aigun as Aihom and the later, Qing Aigun, as Saghalien Oula.

At the time, the Manchus were busy with conquering China; but a few decades later, during the Kangxi era of 1661-1722, they turned their attention to their north-Manchurian backyard. Aigun was re-established near the supposed Ming site in about 1683–84, and a military expeditions went upstream to dislodge the Russians, whose Albazin establishment deprived the Manchu rulers of the tribute of sable pelts that the Solons and Daurs of the area would supply otherwise.[14] Albazin fell during a short military campaign in 1685. The Treaty of Nerchinsk, concluded in 1689, marked the end of the hostilities: it left the entire Amur valley, from the convergence of the Shilka and the Ergune downstream, in Chinese hands.

Fedor Soimonov was sent to map the then little explored area of the Amur in 1757. He mapped the Shilka, which was partly in Chinese territory, but was turned back when he reached its confluence with the Argun.[15] The Russian proselytization of Orthodox Christianity to the indigenous peoples along the Amur was viewed as a threat by the Qing.[16]

The Amur region remained a relative backwater of the Qing Empire for the next century and a half, with Aigun being practically the only major town on the river. Russians re-appeared on the river in the mid-19th century, forcing the Manchus to yield all lands north of the river to the Russian Empire by the Treaty of Aigun (1858). Lands east of the Ussuri and the lower Amur were acquired by Russia as well, by the Convention of Peking (1860).

The acquisition of the lands on the Amur and the Ussuri was followed by the migration of Russian settlers to the region and the construction of such cities as Blagoveshchensk and, later, Khabarovsk.

Numerous river steamers, built in England, plied the Amur by the late 19th century. Tsar Nicolas II, then Tsarovitch, visited Vladivostok and then cruised up the river. Mining dredges were imported from America to work the placer gold of the river. Barge and river traffic was greatly hindered by the Civil War of 1918–22. The Soviet Reds had the Amur Flotilla which patrolled the river on sequestered riverboats. In the 1930s and during the War the Japanese had their own flotilla on the river. In 1945 the Soviets again put their own flotilla on the river. The ex-German Yangtse gunboats Vaterland and Otter, on Chinese Nationalist Navy service, patrolled the Amur in the 1920s.

It is believed there are at least 123 species of fish from 23 families inhabiting the Amul. The majority are of the Gobioninae subfamily of Cypriniformes, followed in number by Salmonidae. Several of the species are endemic. Pseudaspius and Mesocottus are monotypic genera found only in the Amur and some nearby coastal rivers.[17]

Four species of the Acipenseridae family can be found: the kaluga, Amur sturgeon, Sakhalin sturgeon and sterlet. The Kaluga and Amur sturgeon are endemic. The sterlet was introduced from the Ob in the 1950s.[18] 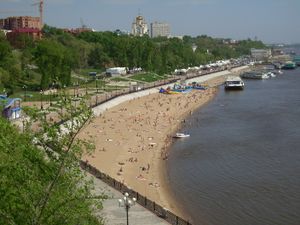 On the Amur in Khabarovsk

Flowing across northeast Asia for over 4,444 kiloمترs (2,761 ميل) (including its two tributaries), from the mountains of northeastern China to the Sea of Okhotsk (near Nikolayevsk-na-Amure), it drains a remarkable watershed that includes diverse landscapes of desert, steppe, tundra, and taiga, eventually emptying into the Pacific Ocean through the Strait of Tartary, where the mouth of the river faces the northern end of the island of Sakhalin.

The Amur has always been closely associated with the island of Sakhalin at its mouth, and most names for the island, even in the languages of the indigenous peoples of the region, are derived from the name of the river: "Sakhalin" derives from a Tungusic dialectal form cognate with Manchu sahaliyan ("black", as in sahaliyan ula, "Black River"), while Ainu and Japanese "Karaputo" or "Karafuto" is derived from the Ainu name of the Amur or its mouth. Anton Chekhov vividly described the Amur in writings about his journey to Sakhalin Island in 1890.

The first permanent bridge across the Amur, the Khabarovsk Bridge with an overall length of 2,590 مترs (8,500 قدم), was completed in 1916, allowing the trains on the Trans-Siberian Railway to cross the river year-round without using ferries or rail tracks on top of the river ice. In 1941 a railway tunnel was added as well. 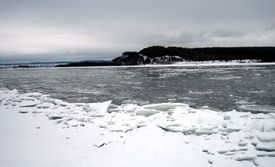 The Tongjiang-Nizhneleninskoye railway bridge was proposed in 2007 by Valery Solomonovich Gurevich, the vice-chairman of the Jewish Autonomous Oblast in Russia. The railway bridge over the Amur will connect Tongjiang with Nizhneleninskoye, a village in the Jewish Autonomous Oblast.[20] The Chinese portion of the bridge was finished in July 2016.[21] In December 2016, work began on the Russian portion of the bridge. The bridge is expected to open in 2020.[22]