The main general types are listed below.

The Institute for Creation Research (ICR) is a young-Earth creationist organization.

Old Earth creationism holds that the physical universe was created by God, but that the creation event described in the Book of Genesis is to be taken figuratively. This group generally believes that the age of the universe and the age of the Earth are as described by astronomers and geologists, but that details of modern evolutionary theory are questionable.[1]

Old Earth creationism itself comes in at least three types:[1]

Day-age creationism states that the "six days" of the Book of Genesis are not ordinary 24-hour days, but rather much longer periods (for instance, each "day" could be the equivalent of millions, or billions of years of human time). The physicist Gerald Schroeder is one such proponent of this view. This version of creationism often states that the Hebrew word "yôm," in the context of Genesis 1, can be properly interpreted as "age."

Progressive creationism holds that species have changed or evolved in a process continuously guided by God, with various ideas as to how the process operated—though it is generally taken that God directly intervened in the natural order at key moments in Earth history. This view accepts most of modern physical science including the age of the Earth, but rejects much of modern evolutionary biology or looks to it for evidence that evolution by natural selection alone is incorrect.[بحاجة لمصدر] Organizations such as Reasons To Believe, founded by Hugh Ross, promote this version of creationism.

Progressive creationism can be held in conjunction with hermeneutic approaches to the Genesis creation narrative such as the day-age creationism or framework/metaphoric/poetic views.

Intelligent design (ID) is the pseudoscientific view[2][3] that "certain features of the universe and of living things are best explained by an intelligent cause, not an undirected process such as natural selection."[4]

Islamic creationism is the belief that the universe (including humanity) was directly created by God as explained in the Qur'an. It usually views the Book of Genesis as a corrupted version of God's message. The creation myths in the Qur'an are vaguer and allow for a wider range of interpretations similar to those in other Abrahamic religions.[5]

Hindu creationists claim that species of plants and animals are material forms adopted by pure consciousness which live an endless cycle of births and rebirths.[6] Ronald Numbers says that: "Hindu Creationists have insisted on the antiquity of humans, who they believe appeared fully formed as long, perhaps, as trillions of years ago."[7] Hindu creationism is a form of old Earth creationism, according to Hindu creationists the universe may even be older than billions of years. These views are based on the Vedas, the creation myths of which depict an extreme antiquity of the universe and history of the Earth.[8][9]

For Orthodox Jews who seek to reconcile discrepancies between science and the creation myths in the Bible, the notion that science and the Bible should even be reconciled through traditional scientific means is questioned. To these groups, science is as true as the Torah and if there seems to be a problem, epistemological limits are to blame for apparently irreconcilable points. They point to discrepancies between what is expected and what actually is to demonstrate that things are not always as they appear. They note that even the root word for "world" in the Hebrew language—עולם (Olam)—means hidden—נעלם (Neh-Eh-Lahm). Just as they know from the Torah that God created man and trees and the light on its way from the stars in their observed state, so too can they know that the world was created in its over the six days of Creation that reflects progression to its currently-observed state, with the understanding that physical ways to verify this may eventually be identified. This knowledge has been advanced by Rabbi Dovid Gottlieb, former philosophy professor at Johns Hopkins University.[بحاجة لمصدر] Also, relatively old Kabbalistic sources from well before the scientifically apparent age of the universe was first determined are in close concord with modern scientific estimates of the age of the universe, according to Rabbi Aryeh Kaplan, and based on Sefer Temunah, an early kabbalistic work attributed to the first-century Tanna Nehunya ben HaKanah. Many kabbalists accepted the teachings of the Sefer HaTemunah, including the medieval Jewish scholar Nahmanides, his close student Isaac ben Samuel of Acre, and David ben Solomon ibn Abi Zimra. Other parallels are derived, among other sources, from Nahmanides, who expounds that there was a Neanderthal-like species with which Adam mated (he did this long before Neanderthals had even been discovered scientifically).[10][11][12][13] Reform Judaism does not take the Torah as a literal text, but rather as a symbolic or open-ended work.

المقالة الرئيسية: Level of support for evolution and Creationism by country 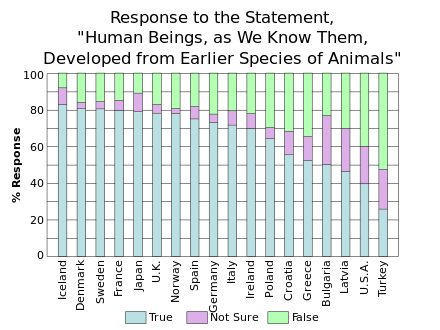 Most vocal literalist creationists are from the US, and strict creationist views are much less common in other developed countries. According to a study published in Science, a survey of the US, Turkey, Japan and Europe showed that public acceptance of evolution is most prevalent in Iceland, Denmark and Sweden at 80% of the population.[16] There seems to be no significant correlation between believing in evolution and understanding evolutionary science.[17][18] 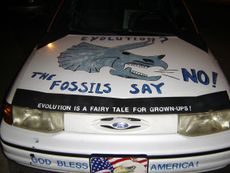 The Truth fish, one of the many creationist responses to the Darwin fish
المقالة الرئيسية: Creation–evolution controversy

In the US, creationism has become centered in the political controversy over creation and evolution in public education, and whether teaching creationism in science classes conflicts with the separation of church and state. Currently, the controversy comes in the form of whether advocates of the intelligent design movement who wish to "Teach the Controversy" in science classes have conflated science with religion.[19]

Most Christians disagree with the teaching of creationism as an alternative to evolution in schools.[21][22]

Science is a system of knowledge based on observation, empirical evidence, and the development of theories that yield testable explanations and predictions of natural phenomena. By contrast, creationism is often based on literal interpretations of the narratives of particular religious texts.[23] Creationist beliefs involve purported forces that lie outside of nature, such as supernatural intervention, and often do not allow predictions at all. Therefore, these can neither be confirmed nor disproved by scientists.[24] However, many creationist beliefs can be framed as testable predictions about phenomena such as the age of the Earth, its geological history and the origins, distributions and relationships of living organisms found on it. Early science incorporated elements of these beliefs, but as science developed these beliefs were gradually falsified and were replaced with understandings based on accumulated and reproducible evidence that often allows the accurate prediction of future results.[25][26]