استمع)؛ في خلقدون البيزنطية، باليونانية: Χαλκηδών)، هي حي عمراني مكتظة وكبير في الجانب الآسيوي من اسطنبول، تركيا على الساحل الشمالي لبحر مرمرة، مقابل وسط البلد التاريخي على الجانب الأوروبي للبسفور. قاضي‌كوي is also the name of the most prominent neighbourhood of the district, a residential and commercial area that, with its numerous bars, cinemas and bookshops, is the cultural centre of the Anatolian side of Istanbul. أصبحت قاضي‌كوي قضاء في 1928 when it was separated from Üsküdar district. The neighbourhoods of İçerenköy, بستانجي and Suadiye were also separated from the district of Kartal in the same year[بحاجة لمصدر], and eventually joined the newly formed district of قاضي‌كوي. Its neighbouring districts are Üsküdar to the northwest, Ataşehir to the northeast, Maltepe to the southeast, and Kartal beyond Maltepe. تعداد منطقة قاضي‌كوي، حسب إحصاء 2007 هو 509,282. 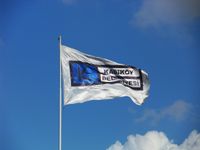 جامعة مرمرة has most of its buildings in قاضي‌كوي, including the large and elegant Haydarpaşa Campus, while the largest private university in İstanbul, Yeditepe University, is located on the hill named "Kayışdağı" at the easternmost edge of the borough (Which later connected to Ataşehir). A new state university, İstanbul Medeniyet University, opened in 2010. It has its main building in Göztepe, Merdivenköy, and has begun to develop campuses in both Kadıköy and Üsküdar. The campuses are divided by the D-100 Highway. Each have a metro station close by.

Another private institution for higher education, the Doğuş University, is situated in the Acıbadem neighborhood of Kadıköy. 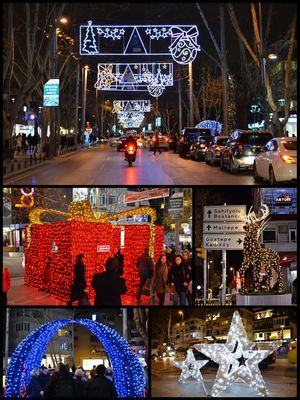 Kadıköy is a busy shopping district, with a wide variety of atmospheres and architectural styles. The streets are varied, some being narrow alleyways and others, such as Bahariye Caddesi, being pedestrian zones. Turkey's biggest food market is there, starting next to the Osman Ağa Mosque, and has an immense turnover of fresh foods and other products from all around Turkey, including a wide range of fresh fish and seafood, olive oil soap, and so on. There are also modern shopping centres, most notably the large Tepe Nautilus Shopping Mall behind the center of Kadıköy, and pavements crowded with street vendors selling socks, unlicensed copies of popular novels, and other products. In the streets behind the main post office, there is a large number of well-known bookshops selling both new and second-hand books, craft-shops and picture-framers, and a number of shops selling music CDs and related ephemera such as film posters and T-shirts. Hard Rock and Heavy Metal music is sold in the arcade named Akmar Pasajı, where associated items are also sold. On Sundays this area becomes a large second-hand book and music street market. Being a crowded shopping district, Kadıköy has many buskers, shoe shine boys, glue sniffers and schoolchildren in the streets selling flowers, chewing gum and packets of tissues.

At the top of the shopping district there is an intersection, with a statue of a bull, called Altıyol (Six Ways), where a road leads to the civic buildings and a huge street market called Salı Pazarı (Tuesday Market). The working-class residential districts of Hasanpaşa and Fikirtepe are located behind the civic buildings.

The district is home to the major Turkish multi-sport club Fenerbahçe SK and their football stadium, the Şükrü Saracoğlu Stadium. Following important victories, all neighbourhoods of Kadıköy are crowded with celebrating people. The stadium hosted the 2009 UEFA Cup Final. The area also has a rugby union team, Kadıköy Rugby, which was the first official rugby club in Turkey.

Kadıköy is twinned with:

قالب:Anatolian neighborhoods of İstanbul by the Bosphorus