Ales Viktaravich Bialiatski[أ] (بالبيلاروسية: Алесь Віктаравіч Бяляцкіcode: be is deprecated ; born 25 September 1962) is a Belarusian pro-democracy activist and prisoner of conscience known for his work with the Viasna Human Rights Centre. In 2020, he won the Right Livelihood Award, widely known as the "Alternative Nobel Prize". In 2022, Bialiatski was awarded the 2022 Nobel Peace Prize along with the organisations Memorial and Centre for Civil Liberties.[1][2]

Since 14 July 2021, he has been imprisoned for alleged tax evasion. Human right defenders consider the charges to be politically motivated and recognize Bialiatski as a prisoner of conscience.

Bialiatski was born in Vyartsilya, in today's Karelia, Russia, to Belarusian parents.[3] His father Viktar Bialiatski is a native of the Rahačoŭ District, and his mother Nina comes from the Naroŭlia District. In 1965, the family returned to Belarus to settle in Svietlahorsk, Homieĺ Region.

Bialiatski is a scholar of Belarusian literature[3] and graduated from Homiel State University in 1984 with a degree in Russian and Belarusian Philology. After graduation, Bialiatski worked as a schoolteacher in the Lieĺčycy District, Homieĺ Region.

In 1985–1986, he served in the army as an armoured vehicle driver in an antitank artillery battery near Yekaterinburg (then Sverdlovsk), Russia.[4]

In the Soviet Union

In the early 1980s, Bialiatski became involved in a number of pro-democracy initiatives, including a group called Belarusian Clandestine Party “Independence” aiming to foster Belarus's leaving the Soviet Union and forming a sovereign and democratic country. The group published an illegal outlet called “Burachok” and co-organized the first-ever anti-Soviet protests, most notably the Dziady demonstrations in 1987 and 1988, a protest against the construction of the Daugavpils hydro-electric power plant, a rally protesting the demolition of the Upper Town architectural heritage in Minsk, and a memorial ceremony at Kurapaty in 1988. In December 1987, Bialiatski was on the organizing committee of the 1st Assembly of Belarusian Communities.

In 1989, Bialiatski received a PhD from the Belarusian Academy of Sciences. During his doctoral studies, Bialiatski helped found the Tutejshyja Association of Young Writers, serving as the group's chairman from 1986 to 1989, which resulted in harassment from the academy administration. In 1988 Bialiatski co-organized the Martyrology of Belarus. He was also one of the founding members of the Belarusian Popular Front and the Belarusian Catholic Community.

In 1989, Bialiatski worked as a junior researcher at the Museum of the History of the Belarusian literature. Later the same year, he was elected director of the Maksim Bahdanovich Literary Museum. Bialiatski left the museum in August 1998, after arranging several key exhibitions, including two in Minsk, one in the Maladziečna District and one in Yaroslavl, Russia.

During Bialiatski's directorship, the museum hosted numerous public events on political, cultural and religious issues. In 1990, the museum building in central Minsk housed the editorial office of “Svaboda”, one of the first pro-democratic newspapers in Belarus. Bialiatski provided the legal address for dozens of NGOs, including the Viasna Human Rights Centre and the Centre “Supolnasts”. He invited several young authors, including Palina Kachatkova, Eduard Akulin, Siarhei Vitushka, and Ales Astrautsou, to work at the museum.

Bialiatski was member of the Minsk City Council of Deputies between 1991 and 1996. On 20 August 1991, the day after the 1991 Soviet coup d'état attempt, he, together with 29 other members of the council, made an open appeal to the people of Minsk “to be faithful to the legally elected authorities and to seek all constitutional means in order to end the activities of the State Emergency Committee”. On 5 September 1991, after the Minsk City Council approved the use of national symbols, Bialiatski brought a white-red-white flag to the Council chamber. The flag was the first to be officially flown on the building of the Minsk City Council.[بحاجة لمصدر]

Bialiatski founded the Viasna Human Rights Centre in 1996. The Minsk-based organization which was then called “Viasna-96”, was transformed into a nationwide NGO in June 1999. On 28 October 2003 the Supreme Court of Belarus cancelled the state registration of the Viasna Human Rights Centre for its role in the observation of the 2001 presidential election. Since then, the leading Belarusian human rights organization has been working without registration.[5]

Bialiatski was chairman of the Working Group of the Assembly of Democratic NGOs (2000-2004). In 2007–2016, he was vice-president of the International Federation for Human Rights (FIDH).[6]

Bialiatski is a member of the Union of Belarusian Writers (since 1995) and the Belarusian PEN-Centre (since 2009).[3]

During the 2020 Belarusian protests, Bialiatski became a member of the Coordination Council of Sviatlana Tsikhanouskaya.[7]

On 4 August 2011 Ales Bialiatski was arrested under charges of tax evasion (“concealment of profits on an especially large scale”, Article 243, part 2 of the Criminal Code of the Republic of Belarus).[8] The indictment was made possible by financial records released by prosecutors in Lithuania and Poland.[9]

On 24 October 2011, Bialiatski was sentenced to 4½ years in prison and confiscation of property. Bialiatski pleaded not guilty, saying that the money had been received on his bank accounts to cover Viasna's human rights activities.[10] He was released on 21 June 2014.[11]

Bialiatski served his sentence in penal colony number 2 in the city of Babrujsk, working as a packer in a sewing shop.

He was repeatedly punished by the prison administration for "violation of the prison rules", and was declared a "malicious offender", which prevented him from being amnestied in 2012 and deprived him of family visits and food parcels.

During his time in prison, Bialiatski wrote many texts on literary topics, essays, memoirs, which were posted to his associates.

An unprecedented campaign of international solidarity was launched during his imprisonment. Bialiatski was released from prison 20 months ahead of schedule on 21 June 2014 after spending 1,052 days of arbitrary detention in harsh conditions, including serving periods of solitary confinement.[20]

The date of Bialiatski's arrest, 4 August, is celebrated annually as the International Day of Solidarity with the Civil Society of Belarus. It was established in 2012 as a response to the activist's arrest.[21]

On 14 July 2021, the Belarusian police searched Viasna's employees' homes around the country and raided the central office. Bialiatski and his colleagues Vladimir Stephanovich and Vladimir Labkovich were arrested.[22][23] On 6 October 2021, Bialiatski was charged with tax evasion with a maximum penalty of 7 years in prison.[24] As of 1 January 2022, he was still in prison.[25] 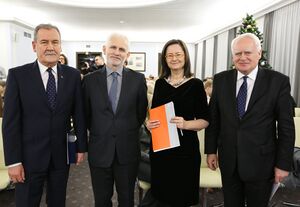 Bialiatski with Jan Wyrowiński, Irena Lipowicz, and Olgierd Dziekoński during the Paweł Włodkowic Award ceremony in the Senate of Poland, 2014

In March 2006, Bialiatski and Viasna won the 2005 Homo Homini Award of the Czech NGO People in Need, which recognizes "an individual who is deserving of significant recognition due to their promotion of human rights, democracy and non-violent solutions to political conflicts".[26] The prize was awarded by former Czech President and dissident Václav Havel. In 2006, Bialiatski won the Swedish Per Anger Prize,[27] named for Swedish diplomat Per Anger awarded to an individual who "promotes democracy and humanitarian efforts, is characterized by active measures and initiative, works for no personal gain, takes great personal risks, displays great courage and is a role model for others".

In 2006 Bialiatski received the "Andrei Sakharov Freedom Award" by the Norwegian Helsinki Committee.

Bialiatski is honorary citizen of Genoa (province of Liguria, Italy), 2010.

In 2012, Ales Bialiatski together with Uganda's Civil Society Coalition on Human Rights and Constitutional Law became the winner of the 2011 Human Rights Defenders Award by the US Department of State. Ales Bialiatski was awarded the prize in absentia, the award was passed to his wife Natallia Pinchuk in the US Embassy in Warsaw, Poland, on 25 September 2012.

In 2012 Bialiatski won the Lech Wałęsa Award for "democratisation of the Republic of Belarus, his active promotion of human rights and aid provided for persons currently persecuted by Belarusian authorities".[28]

In 2012, the Parliamentary Assembly of the Council of Europe awarded him its Václav Havel Human Rights Prize for his work as a human rights defender, "so that the citizens of Belarus may one day aspire to our European standards".[29] As he was detained at the time, the award was received on his behalf by his wife. After his release, he visited Strasbourg to thank the Assembly for its support.

In December 2020, Bialiatski was named among the representatives of the Democratic Belarusian opposition, and honored with the Sakharov Prize by the European Parliament.[32]

In 2022, Bialiatski was awarded the 2022 Nobel Peace Prize along with organisations Memorial and Centre for Civil Liberties.[1]

References in art and media

In 2013 Dmitri Plax produced a play about Bialiatski for the Swedish Radio.

Viktar Sazonau's book "The Poetry of the Prose", 2013, has a dedication to Ales Bialiatski. One of the stories in book entitled "A Postcard from the Political Prisoner Postcard" is based on Bialiatski's experience .[33]

Artist Ai Weiwei constructed Ales Bialiatski's portrait from Lego bricks. The work was displayed at the exhibition "Next" in the Hishhorn Museum in Washington, DC.[43]

قالب:Uncited section Ales Bialiatski is married to Natallia Pinchuk. They met in 1982 when Ales was a student of Francishak Skaryna Homiel State University and Nataliia studied in the pedagogical college in Lojeu. The couple married in 1987. Ales Bialiatski has a son named Adam.

During his university years, Bialiatski played bass guitar in a band called Baski. He has stated that his two major hobbies now are mushroom hunting and planting flowers. He generally speaks the Belarusian language.