Sulfur hexafluoride (SF6) is an inorganic, colorless, odorless, non-flammable, non-toxic extremely potent greenhouse gas, and an excellent electrical insulator.[4] SF 6 has an octahedral geometry, consisting of six fluorine atoms attached to a central sulfur atom. It is a hypervalent molecule. Typical for a nonpolar gas, it is poorly soluble in water but quite soluble in nonpolar organic solvents. It is generally transported as a liquefied compressed gas. It has a density of 6.12 g/L at sea level conditions, considerably higher than the density of air (1.225 g/L).

SF 6 can be prepared from the elements through exposure of S 8 to F 2. This was also the method used by the discoverers Henri Moissan and Paul Lebeau in 1901. Some other sulfur fluorides are cogenerated, but these are removed by heating the mixture to disproportionate any S 2F 10 (which is highly toxic) and then scrubbing the product with NaOH to destroy remaining SF 4.

Alternatively, utilizing bromine, sulfur hexafluoride can be synthesized from SF4 and CoF3 at lower temperatures (e.g. 100 °C), as follows:[5]

There is virtually no reaction chemistry for SF 6. A main contribution to the inertness of SF6 is the steric hindrance of the sulfur atom, whereas its heavier group 16 counterparts, such as SeF6 are more reactive than SF6 as a result of less steric hindrance (See hydrolysis example).[6] It does not react with molten sodium below its boiling point,[7] but reacts exothermically with lithium.

More than 10,000 tons of SF 6 are produced per year, most of which (over 8,000 tons) is used as a gaseous dielectric medium in the electrical industry.[8] Other main uses include an inert gas for the casting of magnesium, and as an inert filling for insulated glazing windows.

SF 6 is used in the electrical industry as a gaseous dielectric medium for high-voltage circuit breakers, switchgear, and other electrical equipment, often replacing oil filled circuit breakers (OCBs) that can contain harmful PCBs. SF 6 gas under pressure is used as an insulator in gas insulated switchgear (GIS) because it has a much higher dielectric strength than air or dry nitrogen. The high dielectric strength is a result of the gas's high electronegativity and density. This property makes it possible to significantly reduce the size of electrical gear. This makes GIS more suitable for certain purposes such as indoor placement, as opposed to air-insulated electrical gear, which takes up considerably more room. Gas-insulated electrical gear is also more resistant to the effects of pollution and climate, as well as being more reliable in long-term operation because of its controlled operating environment. Exposure to an arc chemically breaks down SF 6 though most of the decomposition products tend to quickly re-form SF 6, a process termed "self-healing".[9] Arcing or corona can produce disulfur decafluoride (S 2F 10), a highly toxic gas, with toxicity similar to phosgene. S 2F 10 was considered a potential chemical warfare agent in World War II because it does not produce lacrimation or skin irritation, thus providing little warning of exposure.

SF 6 is also commonly encountered as a high voltage dielectric in the high voltage supplies of particle accelerators, such as Van de Graaff generators and Pelletrons and high voltage transmission electron microscopes.

SF 6 is used to provide a tamponade or plug of a retinal hole in retinal detachment repair operations[12] in the form of a gas bubble. It is inert in the vitreous chamber[13] and initially doubles its volume in 36 hours before being absorbed in the blood in 10–14 days.[14]

SF 6 is used as a contrast agent for ultrasound imaging. Sulfur hexafluoride microbubbles are administered in solution through injection into a peripheral vein. These microbubbles enhance the visibility of blood vessels to ultrasound. This application has been used to examine the vascularity of tumours.[15] It remains visible in the blood for 3 to 8 minutes, and is expired by the lungs.[16]

Sulfur hexafluoride was the tracer gas used in the first roadway air dispersion model calibration; this research program was sponsored by the U.S. Environmental Protection Agency and conducted in Sunnyvale, California on U.S. Highway 101.[17] Gaseous SF 6 is used as a tracer gas in short-term experiments of ventilation efficiency in buildings and indoor enclosures, and for determining infiltration rates. Two major factors recommend its use: its concentration can be measured with satisfactory accuracy at very low concentrations, and the Earth's atmosphere has a negligible concentration of SF 6.

Sulfur hexafluoride was used as a non-toxic test gas in an experiment at St. John's Wood tube station in London, United Kingdom on 25 March 2007.[18] The gas was released throughout the station, and monitored as it drifted around. The purpose of the experiment, which had been announced earlier in March by the Secretary of State for Transport Douglas Alexander, was to investigate how toxic gas might spread throughout London Underground stations and buildings during a terrorist attack.

Sulfur hexafluoride is also routinely used as a tracer gas in laboratory fume hood containment testing. The gas is used in the final stage of ASHRAE 110 fume hood qualification. A plume of gas is generated inside of the fume hood and a battery of tests are performed while a gas analyzer arranged outside of the hood samples for SF6 to verify the containment properties of the fume hood.

It has been used successfully as a tracer in oceanography to study diapycnal mixing and air-sea gas exchange. 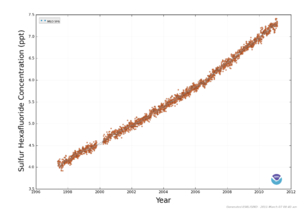 According to the Intergovernmental Panel on Climate Change, SF 6 is the most potent greenhouse gas that it has evaluated, with a global warming potential of 23,900[25] times that of CO 2 when compared over a 100-year period. Measurements of SF6 show that its global average mixing ratio has increased by about 0.2 ppt (parts per trillion) per year to over 9 ppt as of February 2018.[26][27] Sulfur hexafluoride is also extremely long-lived, is inert in the troposphere and stratosphere and has an estimated atmospheric lifetime of 800–3200 years.[28] SF 6 is very stable (for countries reporting their emissions to the UNFCCC, a GWP of 23,900 for SF 6 was suggested at the third Conference of the Parties: GWP used in Kyoto protocol).[29] Average global SF6 concentrations increased by about seven percent per year during the 1980s and 1990s, mostly as the result of its use in the magnesium production industry, and by electrical utilities and electronics manufacturers. Given the small amounts of SF6 released compared to carbon dioxide, its overall contribution to global warming is estimated to be less than 0.2 percent.[30]

In Europe, SF 6 falls under the F-Gas directive which ban or control its use for several applications. Since 1 January 2006, SF 6 is banned as a tracer gas and in all applications except high-voltage switchgear.[31] It was reported in 2013 that a three-year effort by the United States Department of Energy to identify and fix leaks at its laboratories in the United States such as the Princeton Plasma Physics Laboratory, where the gas is used as a high voltage insulator, had been productive, cutting annual leaks by 35,000 pounds. This was done by comparing purchases with inventory, assuming the difference was leaked, then locating and fixing the leaks.[4]

Like xenon, sulfur hexafluoride is a non-toxic gas, yet by displacing oxygen in the lungs, it also carries the risk of asphyxia if too much is inhaled.[32] Being more dense than air, if a substantial quantity of gas is released it will settle in low-lying areas and present a significant risk of asphyxiation if the area is entered. This is particularly relevant to its use as an insulator in electrical equipment where workers may be in trenches or pits below equipment containing SF 6.[33]

As with all gases, the density of SF 6 affects the resonance frequencies of the vocal tract, thus changing drastically the vocal sound qualities, or timbre, of those who inhale it. It does not affect the vibrations of the vocal folds. The density of sulfur hexafluoride is relatively high at room temperature and pressure due to the gas's large molar mass. Unlike helium, which has a molar mass of about 4 grams/mol and gives the voice a childish and a "chipmunk like" quality, SF 6 has a molar mass of about 146 g/mol, and the speed of sound through the gas is about 134 m/s at room temperature, giving the voice a "demonic" quality when SF 6 is inhaled.[34][35] For comparison, the molar mass of air, which is about 80% nitrogen and 20% oxygen, is approximately 30 g/mol which leads to a speed of sound of 343 m/s.[36]