In the Hipparchian, Ptolemaic, and Copernican systems of astronomy, the epicycle (from باليونانية قديمة: ἐπίκυκλος, literally upon the circle, meaning circle moving on another circle[1]) was a geometric model used to explain the variations in speed and direction of the apparent motion of the Moon, Sun, and planets. In particular it explained the apparent retrograde motion of the five planets known at the time. Secondarily, it also explained changes in the apparent distances of the planets from the Earth.

Epicyclical motion is used in the Antikythera mechanism, an ancient Greek astronomical device for compensating for the elliptical orbit of the Moon, moving faster at perigee and slower at apogee than circular orbits would, using four gears, two of them engaged in an eccentric way that quite closely approximates Kepler's second law.

Epicycles worked very well and were highly accurate, because, as Fourier analysis later showed, any smooth curve can be approximated to arbitrary accuracy with a sufficient number of epicycles. However, they fell out of favour with the discovery that planetary motions were largely elliptical from a heliocentric frame of reference, which led to the discovery that gravity obeying a simple inverse square law could better explain all planetary motions. 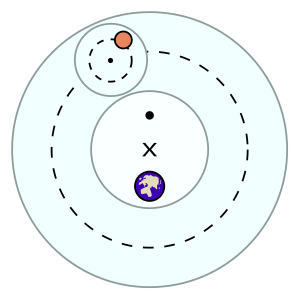 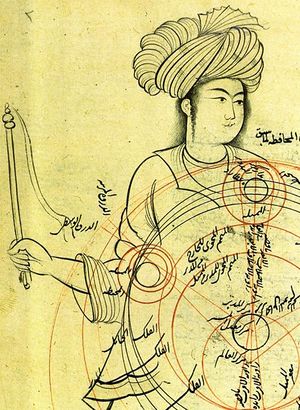 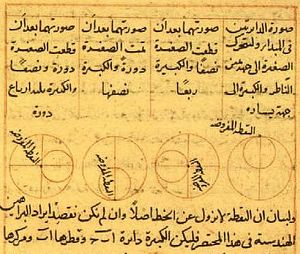 In both Hipparchian and Ptolemaic systems, the planets are assumed to move in a small circle called an epicycle, which in turn moves along a larger circle called a deferent. Both circles rotate clockwise and are roughly parallel to the plane of the Sun's orbit (ecliptic). Despite the fact that the system is considered geocentric, each planet's motion was not centered on the Earth but at a point slightly away from the Earth called the eccentric. The orbits of planets in this system are similar to epitrochoids.

In the Hipparchian system the epicycle rotated and revolved along the deferent with uniform motion. However, Ptolemy found that he could not reconcile that with the Babylonian observational data available to him; in particular, the shape and size of the apparent retrogrades differed. The angular rate at which the epicycle traveled was not constant unless he measured it from another point which he called the equant. It was the angular rate at which the deferent moved around the point midway between the equant and the Earth (the eccentric) that was constant; the epicycle center swept out equal angles over equal times only when viewed from the equant. It was the use of equants to decouple uniform motion from the center of the circular deferents that distinguished the Ptolemaic system.

Ptolemy did not predict the relative sizes of the planetary deferents in the Almagest. All of his calculations were done with respect to a normalized deferent, considering a single case at a time. This is not to say that he believed the planets were all equidistant, but he had no basis on which to measure distances, except for the Moon. He generally ordered the planets outward from the Earth based on their orbit periods. Later he calculated their distances in the Planetary Hypotheses and summarized them in the first column of this table:[2]

Had his values for deferent radii relative to the Earth–Sun distance been more accurate, the epicycle sizes would have all approached the Earth–Sun distance. Although all the planets are considered separately, in one peculiar way they were all linked: the lines drawn from the body through the epicentric center of all the planets were all parallel, along with the line drawn from the Sun to the Earth along which Mercury and Venus were situated. That means that all the bodies revolve in their epicycles in lockstep with Ptolemy's Sun (that is, they all have exactly a one year period).[بحاجة لمصدر]

Babylonian observations showed that for superior planets the planet would typically move through in the night sky slower than the stars. Each night the planet appeared to lag a little behind the stars, in what is called prograde motion. Near opposition, the planet would appear to reverse and move through the night sky faster than the stars for a time in retrograde motion before reversing again and resuming prograde. Epicyclic theory, in part, sought to explain this behavior.

The inferior planets were always observed to be near the Sun, appearing only shortly before sunrise or shortly after sunset. Their apparent retrograde motion occurs during the transition between evening star into morning star, as they pass between the Earth and the Sun.

When ancient astronomers viewed the sky, they saw the Sun, Moon, and stars moving overhead in a regular fashion. They also saw the "wanderers" or "planetai" (our planets). The regularity in the motions of the wandering bodies suggested that their positions might be predictable. 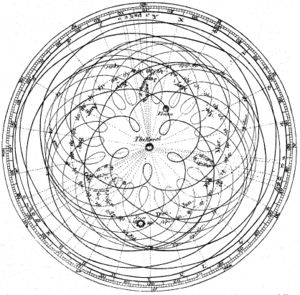 The most obvious approach to the problem of predicting the motions of the heavenly bodies was simply to map their positions against the star field and then to fit mathematical functions to the changing positions.[3]

The ancients worked from a geocentric perspective for the simple reason that the Earth was where they stood and observed the sky, and it is the sky which appears to move while the ground seems still and steady underfoot. Some Greek astronomers (e.g., Aristarchus of Samos) speculated that the planets (Earth included) orbited the Sun, but the optics (and the specific mathematics – Isaac Newton's Law of Gravitation for example) necessary to provide data that would convincingly support the heliocentric model did not exist in Ptolemy's time and would not come around for over fifteen hundred years after his time. Furthermore, Aristotelian physics was not designed with these sorts of calculations in mind, and Aristotle's philosophy regarding the heavens was entirely at odds with the concept of heliocentrism. It was not until Galileo Galilei observed the moons of Jupiter on 7 January 1610, and the phases of Venus in September 1610 that the heliocentric model began to receive broad support among astronomers, who also came to accept the notion that the planets are individual worlds orbiting the Sun (that is, that the Earth is a planet and is one among several). Johannes Kepler was able to formulate his three laws of planetary motion, which described the orbits of the planets in our solar system to a remarkable degree of accuracy; Kepler's three laws are still taught today in university physics and astronomy classes, and the wording of these laws has not changed since Kepler first formulated them four hundred years ago.

The apparent motion of the heavenly bodies with respect to time is cyclical in nature. Apollonius of Perga realized that this cyclical variation could be represented visually by small circular orbits, or epicycles, revolving on larger circular orbits, or deferents. Hipparchus calculated the required orbits. Deferents and epicycles in the ancient models did not represent orbits in the modern sense.

Claudius Ptolemy refined the deferent-and-epicycle concept and introduced the equant as a mechanism for accounting for velocity variations in the motions of the planets. The empirical methodology he developed proved to be extraordinarily accurate for its day and was still in use at the time of Copernicus and Kepler. 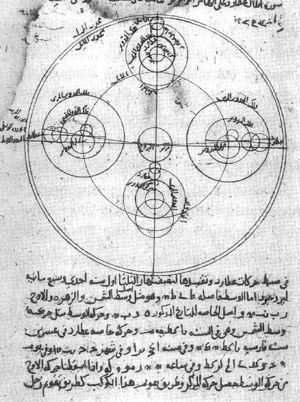 According to one school of thought in the history of astronomy, minor imperfections in the original Ptolemaic system were discovered through observations accumulated over time. It was mistakenly believed that more levels of epicycles (circles within circles) were added to the models to match more accurately the observed planetary motions. The multiplication of epicycles is believed to have led to a nearly unworkable system by the 16th century, and that Copernicus created his heliocentric system in order to simplify the Ptolemaic astronomy of his day, thus succeeding in drastically reducing the number of circles.

With better observations additional epicycles and eccentrics were used to represent the newly observed phenomena till in the later Middle Ages the universe became a 'Sphere/With Centric and Eccentric scribbled o'er,/Cycle and Epicycle, Orb in Orb'.

— Dorothy Stimson، The Gradual Acceptance of the Copernican Theory of the Universe, 1917[4]

According to the historian of science Norwood Russell Hanson:

There is no bilaterally-symmetrical, nor eccentrically-periodic curve used in any branch of astrophysics or observational astronomy which could not be smoothly plotted as the resultant motion of a point turning within a constellation of epicycles, finite in number, revolving around a fixed deferent.

Any path—periodic or not, closed or open—can be represented with an infinite number of epicycles.

where a0 and k0 are constants, i = √−1 is the imaginary unit, and t is time, correspond to a deferent centered on the origin of the complex plane and revolving with a radius a0 and angular velocity

where T is the period.

If z1 is the path of an epicycle, then the deferent plus epicycle is represented as the sum

which is periodic just when every pair of kj is rationally related. Finding the coefficients aj to represent a time-dependent path in the complex plane, z = f(t), is the goal of reproducing an orbit with deferent and epicycles, and this is a way of "saving the phenomena" (σώζειν τα φαινόμενα).[7]

This parallel was noted by Giovanni Schiaparelli.[8][9] Pertinent to the Copernican Revolution's debate about "saving the phenomena" versus offering explanations, one can understand why Thomas Aquinas, in the 13th century, wrote:

Reason may be employed in two ways to establish a point: firstly, for the purpose of furnishing sufficient proof of some principle [...]. Reason is employed in another way, not as furnishing a sufficient proof of a principle, but as confirming an already established principle, by showing the congruity of its results, as in astronomy the theory of eccentrics and epicycles is considered as established, because thereby the sensible appearances of the heavenly movements can be explained; not, however, as if this proof were sufficient, forasmuch as some other theory might explain them.

In part, due to misunderstandings about how deferent/epicycle models worked, "adding epicycles" has come to be used as a derogatory comment in modern scientific discussion. The term might be used, for example, to describe continuing to try to adjust a theory to make its predictions match the facts. There is a generally accepted idea that extra epicycles were invented to alleviate the growing errors that the Ptolemaic system noted as measurements became more accurate, particularly for Mars. According to this notion, epicycles are regarded by some as the paradigmatic example of bad science.[11] Part of the problem may be due to the misconception of the epicycle as an explanation of a body's motion rather than merely a description. Toomer explains as follows,

Whereas we use "hypothesis" to denote a tentative theory which is still to be verified, Ptolemy usually means by ύπόθεσις something more like "model", "system of explanation", often indeed referring to "the hypotheses which we have demonstrated".

Copernicus added an extra epicycle to his planets, but that was only in an effort to eliminate Ptolemy's equant, which he considered a philosophical break away from Aristotle's perfection of the heavens. Mathematically, the second epicycle and the equant produce the same results, and many Copernican astronomers before Kepler continued using the equant, as the math was easier.