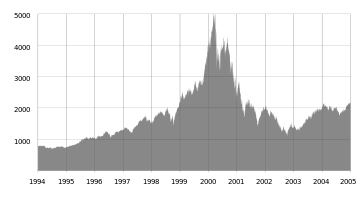 The NASDAQ Composite index spiked in the late 1990s and then fell sharply as a result of the dot-com bubble.

The dot-com bubble (also known as the dot-com boom,[1] the tech bubble,[2] and the Internet bubble) was a stock market bubble caused by excessive speculation of Internet-related companies in the late 1990s, a period of massive growth in the use and adoption of the Internet.[2][3]

Between 1995 and its peak in March 2000, the Nasdaq Composite stock market index rose 400%, only to fall 78% from its peak by October 2002, giving up all its gains during the bubble. During the crash, many online shopping companies, such as Pets.com, Webvan, and Boo.com, as well as several communication companies, such as Worldcom, NorthPoint Communications, and Global Crossing, failed and shut down.[4][5] Some companies, such as Cisco, whose stock declined by 86%,[5] Amazon.com, and Qualcomm, lost a large portion of their market capitalization but survived.

The 1993 release of Mosaic and subsequent web browsers gave computer users access to the World Wide Web, greatly popularizing use of the Internet.[6] Internet use increased as a result of the reduction of the "digital divide" and advances in connectivity, uses of the Internet, and computer education. Between 1990 and 1997, the percentage of households in the United States owning computers increased from 15% to 35% as computer ownership progressed from a luxury to a necessity.[7] This marked the shift to the Information Age, an economy based on information technology, and many new companies were founded.

At the same time, a decline in interest rates increased the availability of capital.[8] The Taxpayer Relief Act of 1997, which lowered the top marginal capital gains tax in the United States, also made people more willing to make more speculative investments.[9] Alan Greenspan, then-Chair of the Federal Reserve, allegedly fueled investments in the stock market by putting a positive spin on stock valuations.[10] The Telecommunications Act of 1996 was expected to result in many new technologies from which many people wanted to profit.[11]

As a result of these factors, many investors were eager to invest, at any valuation, in any dot-com company, especially if it had one of the Internet-related prefixes or a ".com" suffix in its name. Venture capital was easy to raise. Investment banks, which profited significantly from initial public offerings (IPO), fueled speculation and encouraged investment in technology.[12] A combination of rapidly increasing stock prices in the quaternary sector of the economy and confidence that the companies would turn future profits created an environment in which many investors were willing to overlook traditional metrics, such as the price–earnings ratio, and base confidence on technological advancements, leading to a stock market bubble.[10] Between 1995 and 2000, the Nasdaq Composite stock market index rose 400%. It reached a price–earnings ratio of 200, dwarfing the peak price–earnings ratio of 80 for the Japanese Nikkei 225 during the Japanese asset price bubble of 1991.[10] In 1999, shares of Qualcomm rose in value by 2,619%, 12 other large-cap stocks each rose over 1,000% in value, and seven additional large-cap stocks each rose over 900% in value. Even though the Nasdaq Composite rose 85.6% and the S&P 500 Index rose 19.5% in 1999, more stocks fell in value than rose in value as investors sold stocks in slower growing companies to invest in Internet stocks.[13]

An unprecedented amount of personal investing occurred during the boom and stories of people quitting their jobs to trade on the financial market were common.[14] The news media took advantage of the public's desire to invest in the stock market; an article in The Wall Street Journal suggested that investors "re-think" the "quaint idea" of profits, and CNBC reported on the stock market with the same level of suspense as many networks provided to the broadcasting of sports events.[10][15]

At the height of the boom, it was possible for a promising dot-com company to become a public company via an IPO and raise a substantial amount of money even if it had never made a profit—or, in some cases, realized any material revenue. People who received employee stock options became instant paper millionaires when their companies executed IPOs; however, most employees were barred from selling shares immediately due to lock-up periods.[12][صفحة مطلوبة] The most successful entrepreneurs, such as Mark Cuban, sold their shares or entered into hedges to protect their gains.

Most dot-com companies incurred net operating losses as they spent heavily on advertising and promotions to harness network effects to build market share or mind share as fast as possible, using the mottos "get big fast" and "get large or get lost". These companies offered their services or products for free or at a discount with the expectation that they could build enough brand awareness to charge profitable rates for their services in the future.[16][17]

The "growth over profits" mentality and the aura of "new economy" invincibility led some companies to engage in lavish spending on elaborate business facilities and luxury vacations for employees. Upon the launch of a new product or website, a company would organize an expensive event called a dot com party.[18][19]

The bubble in telecom was called "the biggest and fastest rise and fall in business history".[20]

Partially a result of greed and excessive optimism, especially about the growth of data traffic fueled by the rise of the Internet, in the five years after the Telecommunications Act of 1996 went into effect, telecommunications equipment companies invested more than $500 billion, mostly financed with debt, into laying fiber optic cable, adding new switches, and building wireless networks.[11] In many areas, such as the Dulles Technology Corridor in Virginia, governments funded technology infrastructure and created favorable business and tax law to encourage companies to expand.[21] The growth in capacity vastly outstripped the growth in demand.[11] Spectrum auctions for 3G in the United Kingdom in April 2000, led by Chancellor of the Exchequer Gordon Brown, raised £22.5 billion.[22] In Germany, in August 2000, the auctions raised £30 billion.[23][24] A 3G spectrum auction in the United States in 1999 had to be re-run when the winners defaulted on their bids of $4 billion. The re-auction netted 10% of the original sales prices.[25][26] When financing became hard to find as the bubble burst, the high debt ratios of these companies led to bankruptcy.[27] Bond investors recovered just over 20% of their investments.[28] However, several telecom executives sold stock before the crash including Philip Anschutz, who reaped $1.9 billion, Joseph Nacchio, who reaped $248 million, and Gary Winnick, who sold $748 million worth of shares.[29]

Around the turn of the millennium, spending on technology was volatile as companies prepared for the Year 2000 problem. There were concerns that computer systems would have trouble changing their clock and calendar systems from 1999 to 2000 which might trigger wider social or economic problems, but there was virtually no impact or disruption due to adequate preparation.

On January 10, 2000, America Online, led by Steve Case and Ted Leonsis, announced a merger with Time Warner, led by Gerald M. Levin. The merger was the largest to date and was questioned by many analysts.[31]

In February 2000, with the Year 2000 problem no longer a worry, Alan Greenspan announced plans to aggressively raise interest rates, which led to significant stock market volatility as analysts disagreed as to whether or not technology companies would be affected by higher borrowing costs.

On March 13, 2000, news that Japan had once again entered a recession triggered a global sell off that disproportionately affected technology stocks.[35]

On March 15, 2000, Yahoo! and eBay ended merger talks and the Nasdaq fell 2.6%, but the S&P 500 Index rose 2.4% as investors shifted from strong performing technology stocks to poor performing established stocks.[36]

On March 20, 2000, Barron's featured a cover article titled "Burning Up; Warning: Internet companies are running out of cash—fast", which predicted the imminent bankruptcy of many Internet companies.[37] This led many people to rethink their investments. That same day, MicroStrategy announced a revenue restatement due to aggressive accounting practices. Its stock price, which had risen from $7 per share to as high as $333 per share in a year, fell $140 per share, or 62%, in a day.[38] The next day, the Federal Reserve raised interest rates, leading to an inverted yield curve, although stocks rallied temporarily.[39]

On April 3, 2000, judge Thomas Penfield Jackson issued his conclusions of law in the case of United States v. Microsoft Corp. (2001) and ruled that Microsoft was guilty of monopolization and tying in violation of the Sherman Antitrust Act. This led to a one-day 15% decline in the value of shares in Microsoft and a 350-point, or 8%, drop in the value of the Nasdaq. Many people saw the legal actions as bad for technology in general.[40] That same day, Bloomberg News published a widely read article that stated: "It's time, at last, to pay attention to the numbers".[41]

On Friday, April 14, 2000, the Nasdaq Composite index fell 9%, ending a week in which it fell 25%. Investors were forced to sell stocks ahead of Tax Day, the due date to pay taxes on gains realized in the previous year.[42]

By June 2000, dot-com companies were forced to rethink their advertising campaigns.[43]

On November 9, 2000, Pets.com, a much-hyped company that had backing from Amazon.com, went out of business only nine months after completing its IPO.[44][45] By that time, most Internet stocks had declined in value by 75% from their highs, wiping out $1.755 trillion in value.[46]

Investor confidence was further eroded by several accounting scandals and the resulting bankruptcies, including the Enron scandal in October 2001, the WorldCom scandal in June 2002,[49] and the Adelphia Communications Corporation scandal in July 2002.

After venture capital was no longer available, the operational mentality of executives and investors completely changed. A dot-com company's lifespan was measured by its burn rate, the rate at which it spent its existing capital. Many dot-com companies ran out of capital and went through liquidation. Supporting industries, such as advertising and shipping, scaled back their operations as demand for services fell. However, many companies were able to endure the crash; 48% of dot-com companies survived through 2004, albeit at lower valuations.[16]

Several companies and their executives, including Bernard Ebbers, Jeffrey Skilling, and Kenneth Lay, were accused or convicted of fraud for misusing shareholders' money, and the U.S. Securities and Exchange Commission levied large fines against investment firms including Citigroup and Merrill Lynch for misleading investors.

Investor Sir John Templeton successfully shorted the Dot-Com bubble, betting many trendy NASDAQ technology stocks would drop in value.[55] He did so by accurately predicting mass sales of stock at the end of legally-required six-month holding periods for company insiders after Initial Public Offerings. Templeton believed most insiders knew their company stock was highly overvalued and wanted to cash out while prices were high, while mass sales of stock would drive prices lower.

Layoffs of programmers resulted in a general glut in the job market. University enrollment for computer-related degrees dropped noticeably.[56][57] Anecdotes of unemployed programmers going back to school to become accountants or lawyers were common.

Aeron chairs, which retailed for $1,100 each and were the symbol of the opulent office furniture of dot-com companies, were liquidated en masse.[58]

In a 2015 book, venture capitalist Fred Wilson, who funded many dot-com companies and lost 90% of his net worth when the bubble burst, said about the dot-com bubble:

A friend of mine has a great line. He says "Nothing important has ever been built without irrational exuberance." Meaning that you need some of this mania to cause investors to open up their pocketbooks and finance the building of the railroads or the automobile or aerospace industry or whatever. And in this case, much of the capital invested was lost, but also much of it was invested in a very high throughput backbone for the Internet, and lots of software that works, and databases and server structure. All that stuff has allowed what we have today, which has changed all our lives... that's what all this speculative mania built.[59]