Politics of Djibouti takes place in a framework of a presidential representative democratic republic, whereby the executive power is exercised by the President and the Government. Legislative power is vested in both the Government and the National Assembly. The party system and legislature are dominated by the socialist People's Rally for Progress. In April 2010, a new constitutional amendment was approved.[1] The President serves as both the head of state and head of government, and is directly elected for single six-year term. Government is headed by the President, who appoints the Prime Minister and the Council of Ministers on the proposal of the latter. There is also a 65-member chamber of deputies, where representatives are popularly elected for terms of five years. Administratively, the country is divided into five regions and one city, with eleven additional district subdivisions. Djibouti is also part of various international organisations, including the United Nations and Arab League.

In 1958, on the eve of neighboring Somalia's independence in 1960, a referendum was held in Djibouti to decide whether to join the Somali Republic or to remain with France. The referendum turned out in favour of a continued association with France, partly due to a combined "yes" vote by the sizeable Afar ethnic group and resident Europeans.[2] There was also widespread vote rigging, with the French expelling thousands of Somalis before the referendum reached the polls.[3] The majority of those who had voted "no" were Somalis who were strongly in favour of joining a united Somalia as had been proposed by Mahmoud Harbi, Vice President of the Government Council. Harbi was killed in a plane crash two years later.[2]

In 1967, a second plebiscite was held to determine the fate of the territory. Initial results supported a continued but looser relationship with France. Voting was also divided along ethnic lines, with the resident Somalis generally voting for independence, with the goal of eventual union with Somalia, and the Afars largely opting to remain associated with France.[4] However, the referendum was again marred by reports of vote rigging on the part of the French authorities.[5] Shortly after the referendum was held, the former Côte française des Somalis (French Somaliland) was renamed to Territoire français des Afars et des Issas.[6]

In 1977, a third referendum took place. A landslide 98.8% of the electorate supported disengagement from France, officially marking Djibouti's independence.[7][8]

Hassan Gouled Aptidon, a Somali politician who had campaigned for a "yes" vote in the referendum of 1958, eventually wound up as the nation's first president (1977–1999).[2] He was re-elected, unopposed, to a second 6-year term in April 1987 and to a third 6-year term in May 1993 multiparty elections. The electorate approved the current constitution in September 1992.[1] Many laws and decrees from before independence remain in effect. 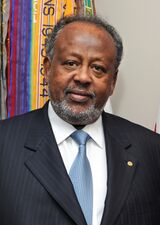 In early 1992, the government decided to permit multiple party politics and agreed to the registration of four political parties. By the time of the national assembly elections in December 1992, only three had qualified. They are the Rassemblement Populaire Pour le Progres (People's Rally for Progress) (RPP) which was the only legal party from 1981 until 1992, the Parti du Renouveau Démocratique (The Party for Democratic Renewal) (PRD), and the Parti National Démocratique (National Democratic Party) (PND). Only the RPP and the PRD contested the national assembly elections, and the PND withdrew, claiming that there were too many unanswered questions on the conduct of the elections and too many opportunities for government fraud. The RPP won all 65 seats in the national assembly, with a turnout of less than 50% of the electorate.

In 1999, President Aptidon's chief of staff, head of security, and key adviser for over 20 years, Ismail Omar Guelleh was elected to the Presidency as the RPP candidate.[9] He received 74% of the vote, the other 26% going to opposition candidate Moussa Ahmed Idriss, of the Unified Djiboutian Opposition (ODU). For the first time since independence, no group boycotted the election. Moussa Ahmed Idriss and the ODU later challenged the results based on election "irregularities" and the assertion that "foreigners" had voted in various districts of the capital; however, international and locally based observers considered the election to be generally fair, and cited only minor technical difficulties. Guelleh took the oath of office as the second President of the Republic of Djibouti on May 8, 1999, with the support of an alliance between the RPP and the government-recognised section of the Afar-led FRUD. 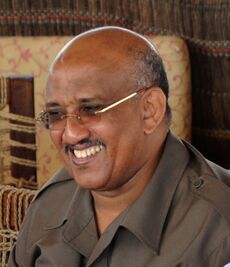 Currently, political power is shared by a Somali Issa president and an Afar prime minister, with cabinet posts roughly divided. However, it is the Issas who dominate the government, civil service, and the ruling party, a situation that has bred resentment and political competition between the Somali Issas and the Afars.

The government is dominated by the Somali Issa Mamasen, who enjoy the support of the Somali clans, especially the Isaaq (the clan of the current president's wife) and the Gadabuursi Dir (who are the second most prominent Somali clan in Djibouti politics). In early November 1991, civil war erupted in Djibouti between the government and a predominantly Afar rebel group, the Front for the Restoration of Unity and Democracy (FRUD). The FRUD signed a peace accord with the government in December 1994, ending the conflict. Two FRUD members were subsequently made cabinet members,[10] and in the presidential elections of 1999 the FRUD campaigned in support of the RPP. In February 2000, another branch of FRUD signed a peace accord with the government. On 12 May 2001, President Ismail Omar Guelleh presided over the signing of what is termed the final peace accord officially ending the decade-long civil war between the government and the armed faction of the FRUD. The treaty successfully completed the peace process begun on 7 February 2000 in Paris, with Ahmed Dini Ahmed representing the FRUD.

In early 2011, the Djiboutian citizenry took part in a series of protests against the long-serving government, which were associated with the larger Arab Spring demonstrations. Guelleh was re-elected to a third term later that year, with 80.63% of the vote in a 75% turnout.[11][12] Although opposition groups boycotted the ballot over changes to the constitution permitting Guelleh to run again for office,[12] international observers generally described the election as free and fair.[13]

The President is directly elected by popular vote for a five-year term. The Prime Minister is appointed by the President, and the Council of Ministers is solely responsible to the President, as specified in Articles 21 and 23 of the Constitution of Djibouti. 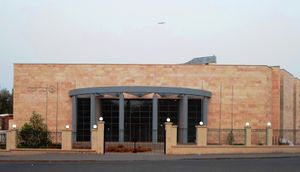 Djibouti is sectioned into five administrative regions and one city:

The country is further sub-divided into eleven districts.