إليوشن إل-14 Ilyushin Il-14 ‏(NATO reporting name: Crate) was a Soviet twin-engine commercial and military personnel and cargo transport aircraft that first flew in 1950, and entered service in 1954. Il-14 was also manufactured in East Germany by VVB Flugzeugbau, in Czechoslovakia as the Avia 14. The Ilyushin Il-14 was typically replaced by the Antonov An-24 and Yakovlev Yak-40.

The Il-14 was developed as a replacement for the widespread Douglas DC-3 and its Soviet built version, the Lisunov Li-2. A development of the earlier Ilyushin Il-12, (that first flew in 1945[1]), the Il-14 was intended for use in both military and civil applications. The Il-12 had major problems with poor engine-out behaviour. Also, it had less payload capability than was originally planned (although the Il-12 was intended to carry 32 passengers, in service it only carried 18, which was uneconomical).[1] 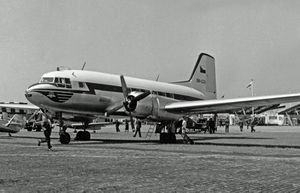 The development into the Il-14 was a vast improvement over the Il-12, with a new wing and a broader tailfin. It was powered by two 1,400 kW (1,900 hp) Shvetsov ASh-82T-7 radial piston engines. These changes greatly improved aerodynamic performance in engine-out conditions.[1]

The type was also used by the East German aircraft industry as a test aircraft for the horizontal stabilizer of the Baade 152. 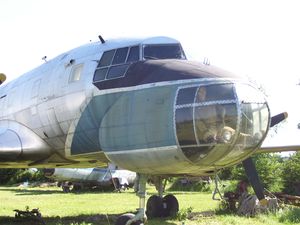 The Il-14 operated in the Soviet Union until the 1980s and early 90s, and other nations like كوبا وڤيتنام. However, the unlicensed Chinese built Y-6 remained in the People's Liberation Army Air Force as a trainer until the late 1980s.

There are no current military operators of the Ilyushin Il-14.

تشيكوسلوفاكيا
Czechoslovakian Air Force. 50 were operated from 1958, though most were locally built examples delivered from 1968. Most were retired prior to the split of Czechoslovakia, though a small number may have served briefly with its successor states.[2]

ألمانيا الشرقية
East German Air Force. 30 were delivered, beginning with 11 Ilyushin built aircraft from 1956 and deliveries of East Germany built aircraft commencing the following year and totaling 19 examples. 20 remained by 1979,[3] and all were withdrawn by 1990, with none being passed on to the unified German Luftwaffe.[2]

مصر
Egyptian Air Force. 70 were operated by the Egyptian Air Force from 1955. Most were Soviet built models, but at least one East Germany built Il-14P was delivered in 1957. A number of aircraft were destroyed during fighting with Israel, but 26 survived to the peace of 1979.[3] Acquisition of Western aircraft from then on led to the retirement of the Il-14 by 1994.[2]

اليمن الشمالي
North Yemen Air Force. 6 or more were delivered from 1958, with a single example flying in 1979.[3] This was passed on to the unified Yemen. 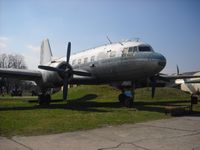 اليمن
Yemen Air Force. 1 was inherited from North Yemen in 1990, serving for a short time before being retired.[2]

يوغسلافيا
SFR Yugoslav Air Force. One Il-14P was presented by Soviet prime minister Nikita Khrushchev to prime minister Josip Broz Tito in 1956. Six others were given to the Air Force by Yugoslav Airlines in 1963. and were used until 1974. The one presented to Tito is preserved in the Museum of Yugoslav Aviation in Belgrade. 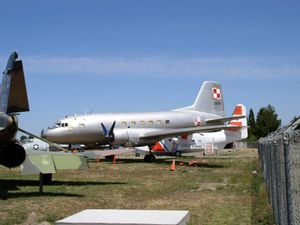 Very few examples remain airworthy, with some still in use for freight duties, and a handful maintained by aviation clubs and enthusiasts. Today only three aircraft remain airworthy in Russia: one, called "Soviet Union" at Gorelovo airfield near St. Petersburg, another, called "Penguin" has performed its maiden flight after restoration on 1.10.2012 and now is based at Stupino airfield near Moscow. The third aircraft, called "The Blue Dream" performed its maiden flight from Tushino airfield to Stupino airfield in May 2014 after more than 10 years repair performed by a team of aero enthusiasts.[6][7] There was also one Il-14 that was possibly airworthy in the United States, but its registration was cancelled in July 2014.[8] 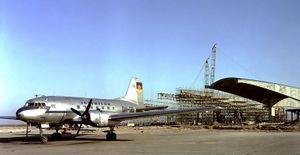 Yugoslav Airlines purchased six Il-14M aircraft in 1957. They were withdrawn in 1963 because they were not as profitable as the Convair CV-440, used by JAT in this period. They were given to the Yugoslav Air Force after the purchase of the Sud Aviation Caravelle and were used until 1974.