The name of the commune derives either from the Bituriges, the name of the original inhabitants, or from the Germanic word Burg (French: bourg. Spanish: burgo. English, others: burgh, berg, or borough), for "hill" or "village". The Celts called it Avaricon; Latin-speakers: Avaricum. In the fourth century BC, as in the time of Caesar, the area around it was the center of a Gallic (Celtic) confederacy.

In 52 BC, the sixth year of the Gallic Wars, while the Gauls implemented a scorched-earth policy to try to deny Caesar's forces supplies, the inhabitants of Avaricum begged not to have their town burned.[بحاجة لمصدر] It was temporarily spared due to its good defences provided by the surrounding marshes, by a river that nearly encircled it, and by a strong southern wall. Julius Caesar's forces, nevertheless, captured and destroyed the town, killing all but 800 of its inhabitants.[بحاجة لمصدر]

Rome reconstructed Avaricum as a Roman town, with a monumental gate, aqueducts, thermae and an amphitheatre; it reached a greater size than it would attain during the Middle Ages. The massive walls surrounding the late-Roman town, enclosing 40 hectares, were built in part with stone re-used from earlier public buildings.

The third-century AD Saint Ursinus, also known as Saint Ursin, is considered[ممن؟] the first bishop of the town. Bourges functions as the seat of an archbishopric. During the 8th century Bourges lay on the northern fringes of the Duchy of Aquitaine and was therefore the first town to come under Frankish attacks when the Franks crossed the Loire. The Frankish Charles Martel captured the town in 731, but Duke Odo the Great of Aquitaine immediately re-took it. It remained under the rule of counts who pledged allegiance to the Aquitanian dukes up to the destructive siege by the Frankish King Pepin the Short in 762, when Basque troops are found defending the town along with its count. 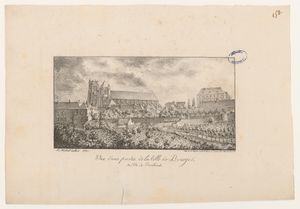 During the Middle Ages, Bourges served as the capital of the Viscounty of Bourges until 1101. In the fourteenth century, it became the capital of the Duchy of Berry (established in 1360). The future king of France, Charles VII (ح. 1422–1461), sought refuge there in the 1420s during the Hundred Years' War. His son, Louis XI, was born there in 1423. In 1438, Charles VII decreed the Pragmatic Sanction of Bourges. During this period, Bourges was a major centre of alchemy.[بحاجة لمصدر]

The Gothic Cathedral of Saint Etienne, begun at the end of the twelfth century, ranks as a World Heritage Site. It is considered[ممن؟] one of the earliest examples of the High Gothic style of the thirteenth century.[2]

Bourges has a long tradition of art and history. Apart from the cathedral, other sites of importance include the 15th-century Palace of Jacques Cœur and a sixty-five-hectare district of half-timbered houses and fine town-houses.

Bourges sits at the river junction where the Auron flows into the Yèvre. The disused Canal de Berry follows alongside the course of the Auron through Bourges.

Bourges, located in the center of France, away from the Atlantic ocean, features a typical degraded oceanic climate (Köppen : Cfb), characterized by colder, drier winters and warmer, wetter summers than the oceanic climate. 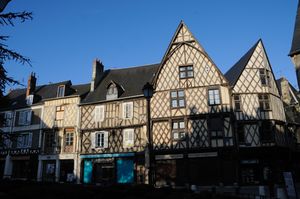 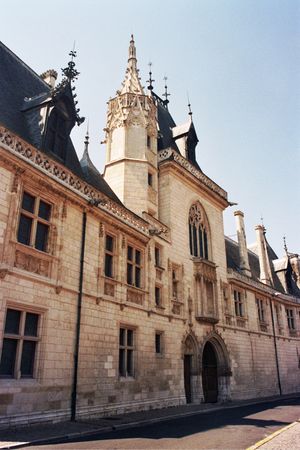 Bourges' principal football team are Bourges Football 18. It is also home to the women's basketball club CJM Bourges Basket, which has won multiple titles in domestic and European basketball. Bourges XV is the premier rugby team in the region, currently playing in French National Division, Federal 3.

Bourges is twinned with:[12]

Every summer, and since 2002, Les mille univers hosts a writing workshop in collaboration with Oulipo.[13]

انظر أيضاً: Bibliography of the history of Bourges